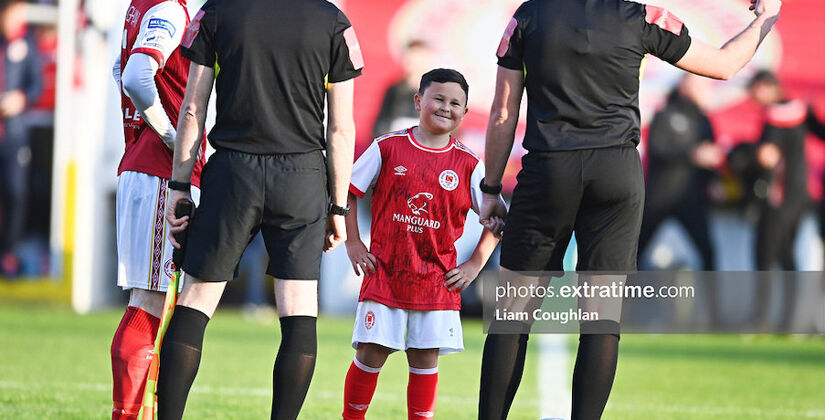 The Saints are seeking their sixth league win in a row when they host Derry City in Richmond Park on Friday night (kick off 7.45pm).

A win for Tim Clancy’s men would move to within four points of second placed City with a game in hand. Should Dundalk drop points in the Louth derby, a Saints victory will jump the up into third place.

Finish in that position come season’s end and St. Pat’s will be back in European action next year.

"It's a huge game,” said Clancy speaking at his club’s media event ahead of the match. “Obviously, we want to put right the fixture we had earlier on this year at Richmond. We got beaten 4-0 and it was the probably the lowest point for us this season.

“We are on a good bit of form as well since the break in mid-season. We have won five on the bounce now and we know it is going to be hard to keep that run going but we are definitely going into the game with confidence.

“We are hoping we can enforce our way of playing onto the game and if we play well and take our chances, I've no doubt we can win."

Having exited the cup and with this week being an the international window, it is three weeks since the Saints were in action.

They won 2-0 in Head in the Game Park with Mark Doyle and Chris Forrester on hand with the second half goals in Drogheda having lost Anto Breslin to a red card in the opening half (meaning Breslin is suspended for Friday’s game).

While St. Patrick’s Athletic are on a great run of form so are the Candystripes who have won their last four matches and haven’t suffered a league defeat since last May (when they lost 1-0 away to Shamrock Rovers).

A win for the visitors would move them to within two points of the Hoops who currently top the table with Rovers not playing till Saturday when they travel from Tallaght to Sligo to take on the Bit O’ Red.

"It has the makings of a cracking game with two good sides going at it,” said Ruaidhri Higgins about his side’s trip to Inchicore.

"It's a briliant venue; a good pitch with the crowd on top of you and we're really looking forward to it.

"We're not going down there to sit in and try to hold on to something. We'll do what we do every time we play - go at them and try to pick up three points."

"It'll be a very difficult game, we know that, but the players are in good form and have prepared well during the International break."

The club confirmed during the week that midfielder Ciaron Harkin will miss the rest of the season after suffering a second ACL injury having only just returned to fitness.

"We're devastated for him - this club means so much to him and it's a horrible one for him to take, having looked to be getting close to a return.

"He's a massive part of our dressing room and will continue to be even more so now as his rehabilitation continues. He's a real battler and will get all the help he needs to bounce back from this."

This week’s extratime.com podcast contains a lengthy interview with Higgins:

MATCH STATS
The Athletic are without a win against the Candystrips this season. They lost in Derry 2-1 back in March, suffered a 4-0 defeat in Richmond Park in late April before the sides played out a scoreless draw in Derry when they last met.

The Saints haven’t lost at home since last June when Shamrock Rovers came to Inchicore and won 2-1.

Stephen Kenny: ‘It’s a few minutes of madness and I think we can learn from that’ https://t.co/Obdbm9fpJr pic.twitter.com/o3vegTsJo3