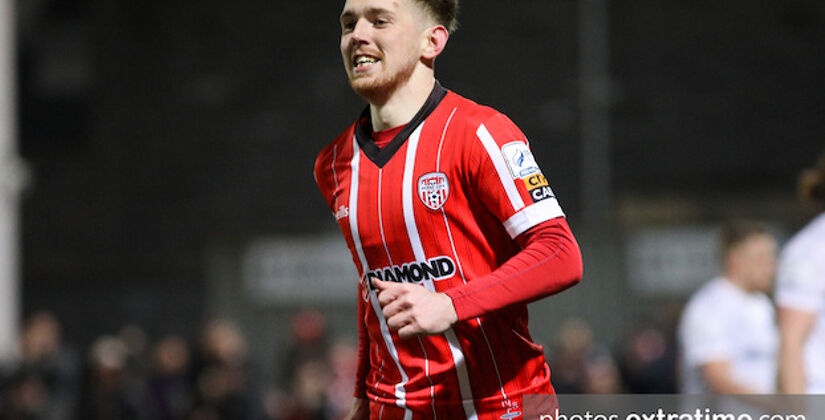 Derry City extended their lead at the top of the league with a 4-0 win over St Patrick’s Athletic in Richmond Park.

Two first half goals from Jamie McGonigle and another from Matty Smith followed by a lovely strike from Cameron Dummigan on the hour were enough for the Candystripes to go three points clear at the top of the table.

It was the away side who started the brightest with Patrick McEleney picking up the ball deep and spraying clever passes.

Pat’s - who were playing with a three at the back - seemed to be struggling to play through the lines in the early stages.

It didn’t take long for Smith to score against his former club. Brandon Kavanagh brought the ball out of the sky played in Smith who stroked the bacll into the bottom right corner after five minutes.

Derry had the ball in the net again moments later. McGonigle was first to react after Adam O’Reilly was caught in possession in his own box but the ref judged the league’s top marksman to be offside.

Kavanagh picked up space in a dangerous area but dragged his shot wide.

The intensity from Ruaidhri Higgin’s side continued. Patching robbed Redmond on 14 minutes and looked to be almost through on goal but bent his effort wide.

Pats first shot on target came on 19 minutes after Joseph Anang slipped and miss-hit a clearance. It found its way to Darragh Burns who linked with Eoin Doyle before Billy Kings header was saved.

McGonigle looked sharp and on 23 minutes he turned Grivosti in the box but Anang was quickly out to block any effort.

Jack Scott played a long pass to which King ran on to, he flashed his cross in but it missed everyone in the box.

McGonigle double the lead after 30 minutes. The goal came after some nice play by Will Patching who twisted and turned before laying it off to Smith, the Scot then crossed and McGonigle tapped in a the far post.

Moments later Jack Scott should have pulled one back from a Saints corner. After reacting first to a knockdown the Wolverhampton Wanderers loanee managed to blaze his shot over from just a few yards out.

Just before the break McGonigle got his second and Derry’s third. Kavanagh played a perfectly weighted pass and the striker smashed the ball across goal leaving Anang with no chance.

City nearly added another just after halftime. They worked a clever corner routine with Patrick McEleney and Kavanagh, the latter’s shot was turned in but the Derry player was in an offside position.

The visitors kept applying pressure and Patrick McEleney had another chance on 54 minutes, it broke to him on the edge of the box after the Athletic cleared a set piece but the ex-Dundalk man blazed over.

It was four on the hour mark when Dummigan’s shot flew past Anang and went in off the post.

Smith had a chance for his second on the 70th minute after good work from Ronan Boyce down the right who crossed but Smith’s attempt was right at Anang.

Late in the game Saints substitute Ronan Coughlan went off with what looked like a nasty hamstring injury.

Derry were excellent value for their win. The visitors managed the second half well and were rarely in trouble.

Pats in contrast, have lost ground on the top two and will be dealt a blow by the manner of the defeat. Shamrock Rovers draw against Sligo Rovers means the Foylesiders are now three points clear at the top while the Saints drop to fifth place.