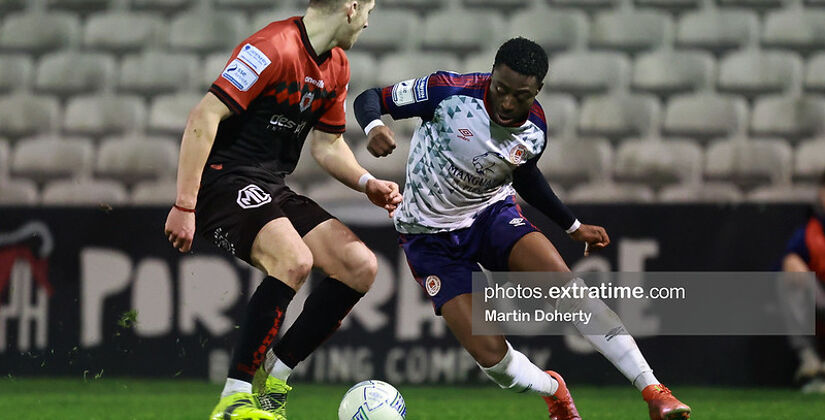 A hat-trick from Tunde Owolabi helped St. Patrick’s to an ultimately comfortable derby victory. Goals at the start and end of the first half were added to by a second half penalty to get their European hopes back online.

Bohemians will be left frustrated by a combination of bad defending and decent goalkeeping by home keeper Joseph Anang. He made some crucial saves when the game was still in the balance.

The home side made three changes from the defeat to Shelbourne. Ian Bermingham, Jason McClelland and Tunde Owolabi came into replace Billy King, Ben McCormack and Darragh Burns. Sam Packman and Kris Twardek were both injured early in the Sligo encounter so both missed out for Bohs. Max Murphy and Ali Coote came into the side.

Pats were coming into the game in slightly indifferent form but were ahead within the first couple of minutes. The reintroduced Tunde Owolabi showing his strength to shake off the attention of Ciaran Kelly to drive past James Talbot.

The away side were stunned by this initially, but soon begun to make their presence felt. Promise Omochere was off target with his header from a corner swung in from the left-hand side, while Dawson Devoy’s effort from distance always looked like it was going over. Tyreke Wilson then found Junior Ogedi-Uzokwe at the back-post following another set-piece. His volley was just wide.

It was the on-loan goalkeeper, Joseph Anang, who was keeping St. Pat’s in the game at this point. An incredible sequence saw him pull off a great save to deny Ogedi-Uzokwe firstly and then Omochere and Jordan Flores had follow-up headers cleared off the line. The home side responded in kind and Eoin Doyle was cursing his fortune as his header went wide from a Jason McClelland free kick. Owolabi then just about failed to connect with an Anthony Breslin low cross.

He was not to be denied for long though. Just as half-time was about to be announced, he received the ball on the edge of the area, advanced into space and shot into the bottom corner.

The home side seemed to be content to sit in and allow Bohemians have the ball as the second-half progressed. Much of the cutting edge seemed to be lacking as they struggled to get behind the home back-line. They knew that if a break occurred, they had the pace to be able to take advantage of it.

And they did. Sam Curtis and Owolabi combined well as the ball was played through midfield. It was laid into the path of Doyle who had his back to goal. A quick spin caught out Ciaran Kelly and a penalty was awarded. Despite Doyle being the usual penalty taker at the club, he allowed Owolabi the chance to complete his hat-trick. Which he duly obliged, sending the ball past the dive of James Talbot.

He was substituted not long afterwards to allow him take in the adulation of the home support. Good work for the evening considering he had not scored in a while.

Three substitutes then almost combined to really rub the salt in. Mark Doyle won the ball just outside his own area before playing it forward to Ben McCormack who tried to play in Kyle Robinson. The two youngsters just got their wires crossed though and Bohs escaped.

Bohemians were still full of pace but were running out of ideas and time. They were left cursing Anang yet again as he stopped a shot from distance by Jamie Mullins.

Delight for the home fans as they stop a run of three games without a win. They travel up to Oriel Park to take on Dundalk on Friday night. Bohemians host Drogheda on the same evening.