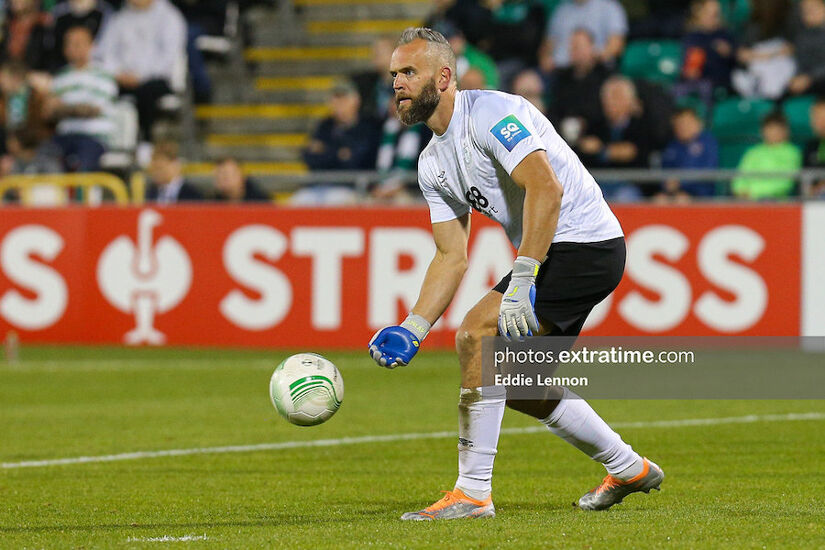 Alan Mannus equalled the Rovers all-time record of clean sheets (97) with the shutout against the Students Credit: Eddie Lennon (ETPhotos)

Shamrock Rovers moved five points clear of Derry City at the top of the table with six games remaining for both sides after a 1-0 win over UCD at Tallaght Stadium on Monday evening.

Neil Farrugia proved the match winner on the night with his third goal in the last three league games.

Playing across the international break, the Hoops picked up four points from their two games in hand over Derry City over the last five days. If the both teams keep winning, Rovers will be crowned champions if they avoid defeat when the Candystripes come to Tallaght in the penultimate game of the league campaign.

Rovers’ final league match will be away to UCD. The Hoops had beaten the Students by a 3-0 scoreline in their other two games this season and it really should have been similar again this time only for their wastefulness in front of goal.

At the other end of the pitch though the result marked a landmark for Shamrock Rovers goalkeeper Alan Mannus who equalled the all-time record of league clean sheets for the club.

Stephen Bradley brought back into his Rovers team Lee Grace on his return from suspension and the Carrick-on-Suir man skippered the side. With under-age international callups Bradley again had to do without with Andy Lyons and Justin Ferizaj.

UCD were probably harder hit with international absentees though compared with Rovers as they lack the depth of the home side’s squad. Andy Myler was missing Thomas Lonergan, as he was on under-19 Ireland duty and they could have done with his threat up front with nine goals from his last 11 appearances for the Students.

Myler’s men really struggled to maintain any possession in the opening half, with the Hoops dominating proceedings and they took the lead after just 13 minutes.

Neil Farrugia, who had been withdrawn at half-time last week when on a yellow card in Tolka Park, was an outlet down the right for Rovers all evening. He got in at the back post to touch the ball home inside the six yard box after a Rory Gaffney-Sean Kavanagh one-two on the left allowed Gaffney sweep a cross into the dangerzone with the outside of his boot.

Jack Byrne, Graham Burke and Dylan Watts all had shots on goal with Burke’s effort on 25 minutes the closest that they came to doubling Rovers’ lead when Burke forced Lorcan Healy into a fine fingertip save.

The UCD keeper then stopped a Gaffney effort with his head from close range and required some treatment. He was withdrawn at half time with Kian Moore coming on in his place.

The visitors did trouble the Hoops on a couple of first half occasions. Donal Higgins had a shot that just drifted wide of Alan Mannus’ goal. Dylan Duffy, one of four former Hoops in the UCD starting lineup, who was excellent all night got a shot away but was too wayward to trouble Mannus.

Rovers continued in the same vein after the restart. Gaffney rippled the side netting off a Farrugia pass. Moore batted out a Burke shot from close range and then the Rovers striker had the ball in the back of the net only for the offside flag to go up.

Evan Caffrey did well to block a Sean Kavanagh cross, booting the ball over his own crossbar as the pressure from the home side built and built.

Mannus had been a spectator for much of the match but just after the hour mark he pulled off a superb save to tip over a driven Dylan Duffy shot that looked destined for the back of the net.

Bradley certainly would have wanted his team to add to their goal tally so he could make some substitutions as he looks to manage his players minutes on the pitch but the UCD defence stood firm for the remainder of the game.

Three points was all that mattered for the Hoops.

Derry City will play again prior to Rovers taking to the pitch – the Hoops are away to Sligo Rovers on Saturday. The Candystripes take on fourth placed St. Patrick’s Athletic (12 points behind the Hoops with a game in hand) on Friday night while third placed Dundalk who trail the Hoops by ten points play a Louth derby at home to Drogheda United on the same night.

UCD’s battle to avoid relegation will continue on Friday when they travel to Dalymount Park to take on Bohemians.