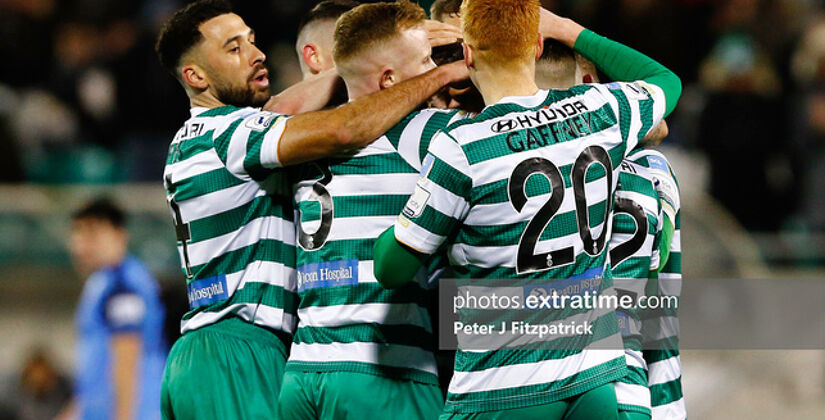 Shamrock Rovers get their title defence off on the right foot with a thumping 3 – 0 win over UCD at Tallaght Stadium.

On a freezing cold night at Tallaght Stadium, this was exactly the start to the season Stephen Bradley’s side would have been looking for as they began their title defence, aiming for a third consecutive Premier Division title. Tonight also marked the return of two time FAI League Player of the Year, Jack Byrne, to Tallaght Stadium. This was arguably the most demanding fixture UCD could have had to open their campaign this season and was truly a baptism of fire for the Students.

The first 10 minutes of the match were extremely cagey. UCD looked to intimidate Rovers by instigating a strong press that kept the home side camped out in their own half. An impressive start by the D4 side. The first clear cut chance of the match came the way of former UCD man and current Rovers player Neil Farrugia. The ball was worked down the left hand side of the UCD final third, but Farrugia snatched at it and lashed it into the side netting.

By the 15 minute mark, it was clear that Rovers were happy to pass it around, but with this came some complacency from the home side. This allowed UCD winger Liam Kerrigan to pick up a loose ball and sprint down the right wing, but Alan Mannus was up to challenge and saved what was ultimately a tame shot from Kerrigan. After the half-hour mark, Rover’s midfielder Neil Farrugia went down with what was a suspected torn hamstring. Farrugia was replaced by Barry Cotter. This is extremely unfortunate for the player as it appeared to be the same hamstring that he has had many problems with in the past.

Shamrock Rovers finally broke the deadlock in the 39th minute. A delightful cross sent in with pace and purpose by Byrne was met by defender Sean Hoare who rose above everyone to guide the ball past Lorcan Healy and make it 1 – 0 to Shamrock Rovers. Not too long after this, Byrne sent in another venomous cross on the right-hand side of the pitch, which was met by the head of Danny Mandroiu, who made it 2 – 0 to Rovers. The home side had hit the Students with a one-two combo right before the half. A devastating blow.

A pivotal moment in the second half was when Barry Cotter was brought down in the UCD box, but the referee waved away the claim for a penalty. A seemingly identical incident happened at the other end of the pitch, with Kerrigan going on another blistering run. Kerrigan was subsequently brought down in the box, but it appeared that the UCD player had made the most of minimal contact. The end result was a stern look, and a get up gesture from the referee.

The UCD defence seemed to be falling apart at the seams as the match went on. Eric Yoro gave the ball sloppily to Mandroiu, but the Irish international was unlucky to hit the target after a deflection caused the ball to hit the woodwork of the UCD goal. The final nail in the UCD coffin came when centre half Sam Todd passed the ball to second-half substitute Graham Burke who slotted the ball past Lorcan Healy in a cool, calm, and composed manner. 3 – 0 to Shamrock Rovers.

Ultimately, this was the ideal start for Stephen Bradley’s side, but the lack of composure in front of goal as well as the injury of Neil Farrugia will be some cause for concern. On the other hand, UCD find themselves at the foot of the table, but there were some promising signs, such as the performance of Liam Kerrigan and the fight they showed when faced with a Rocky vs Ivan Drago type scenario. It will be fascinating to see how they go on. All in all, a great start to the 2022 season.

Jack Keegan has yet to write anything about themselves but click on the bio link to view all past work.