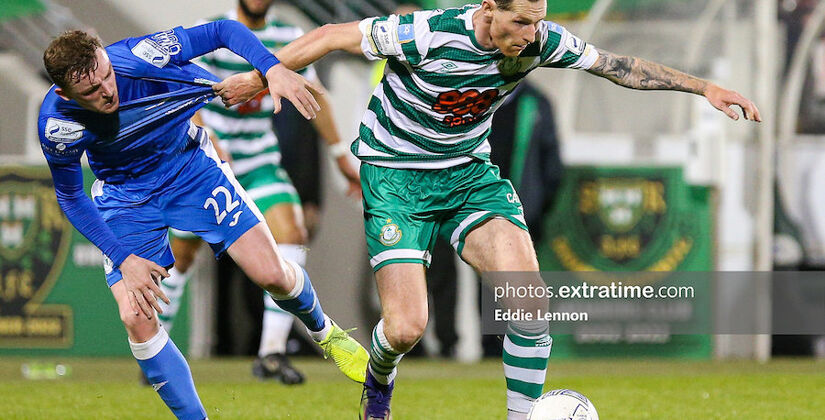 The Hoops welcome Finn Harps to Tallaght on Sunday evening (kick off 7pm) for this re-arranged fixture from Friday due to Rovers’ involvement in the Europa Conference League.

The home side earned their first ever point in the group stages of a UEFA competition last Thursday with a scoreless draw in Tallaght against Swedish side Djurgardens.

Speaking ahead of Sunday’s league game with shamrockrovers.ie Hoops Head Coach Stephen Bradley said: “I think we have to be careful about everyone’s expectations as a football club. I said afterwards that I was frustrated that we didn’t win it because of the opportunities that we created but we’ve also got to be really happy with a point.

“It’s the first ever point for the club in Europe and there’s a reason for that. We’re playing against a really good side in group stage football. So we’ve got to understand that it’s a very good point and we move on.

“Although we were very frustrated afterwards, we’ve got to be careful to not get ahead ourselves and think that we have a divine right to win those type of games. They’re tough games at a good level. I felt we had the better opportunities to score in the game. So overall, I did think we possibly could have won it.

“We made chances and it was just unfortunate we didn’t take one but we started the second half really well. Obviously if one of those chances goes in, it turns out to be a different game.”

Bradley handed 17-year-old Justin Ferizaj just his third first team start (the others came in the 4-0 FAI Cup win over Bangor Celtic and the 1-0 home win over Ferencvaros in the Europa League play-off). The Rovers gaffer said he will look to mix his starting XI up over the next number of weeks – the club have a minimum of 15 games over the next 56 days.

“It’s something we’ve done the last couple of years, we’ve changed the team when we’ve had a really busy period. This period will be no different and that’ll be the case between now and the end of the season.

“It’s about attacking the game in front of you and trying to win it but also looking at the schedule ahead of you and believing that every player in the squad is ready to play. No one that does start makes us weaker so that gives you really good options as a manager. So we’ll see the squad utilised with this fixture list we have coming up.”

Harps are back bottom of the table after Friday’s results, while Derry City’s win over Bohemians moved them within a point of the Hoops (who have two games in hand including Sunday’s clash with Harps).

“It’s a really big game for both clubs. We’ve got to make sure that we’re at our levels that we were on Thursday if we want to go and take maximum points. Finn Harps will have the attacking strength that they always bring to any ground. We know Ollie will have them really organised. They’re extremely honest, hard-working players and once you have that you have a chance in any game.”

UCD’s come-from-behind 3-2 home win over Dundalk on Friday night saw them move off the bottom of the table at the expense of Harps.

Ollie Horgan’s side now trail the Students by a point and the teams will have played the same number of games when the match in Tallaght is complete on Sunday evening.

Harps lost 2-1 against St. Patrick’s Athletic in their last league game. Ollie Horgan told FinnHarps.ie: “We played well at times last week and feel we could have taken something from the game.

"A couple of minutes of madness saw us concede two goals and it was always going to be an uphill battle from there, but in fairness to the lads they got us back into the game and kept fighting to the final whistle but it wasn’t to be.”

Harps did take four points off the Hoops last season – winning in Finn Park and drawing 1-1 in Tallaght but have lost all three games to Rovers so far this season.

“There is no point pretending we’re not seriously up against it now on Sunday. Rovers are a serious side, they’re competing in the group stages of Europe and they’ll want to maintain their lead at the top of the table having lost to Bohs last week.

“We’ve improved in the last couple of games but we need to be at our absolute best to have any chance, and even that might not be enough. We’ll take a cut off it anyway and see where we end up.”

Harps continue to miss long term absentee and club captain Dave Webster while they have a number of doubts for the game (Rob Slevin, Regan Donelon, Elie-Gael N’Zeyi and Mark Timlin are doubts).

However Ryan Rainey and former Hoops Ryan Connolly are available for selection.

This will be the 20th time in all competitions that Stephen Bradley has managed Shamrock Rovers against Finn Harps. He was won 17 times, with one draw and just one defeat. That loss came last season when Harps beat the Hoops 2-1 in early September.

Rovers have never lost a first team game against Finn Harps in Tallaght. You have to go back to August 2008 for the last time Rovers lost to Finn Harps in a home game. That was a 2-0 win for the Donegal side in a game played in Tolka Park.

The Hoops haven’t lost a competitive game in Tallaght for over a year with their last loss coming at the hands of Flora Tallinn on 26 August 2021. Rovers have lost just the one league game at home since June 2019. They are 24 league games without a loss at home – which was a feat they last managed in the days of Milltown. They went 24 games unbeaten between October 1983 and February 1985.