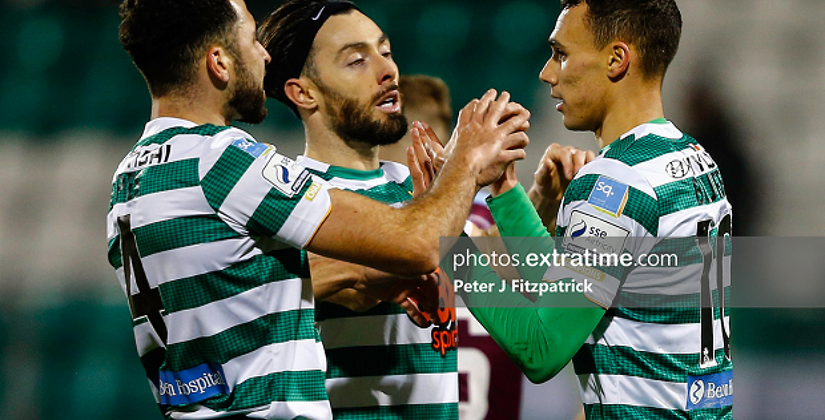 Shamrock Rovers got back to winning ways after their defeat in Derry last Friday with a 3-1 win over Drogheda United at Tallaght Stadium on Monday night. The victory sent the Hoops top in the very early season table.

First half goals from Sean Gannon and Jack Byrne and a Graham Burke breakaway goal nine minutes from full time were enough to give the Hoops all three points but only after they had some nervy moments in the second half following Evan Weir’s goal for the Boynesiders.

Drogheda United came to Tallaght Stadium with a real ambition to take Rovers on and they certainly did so in the opening period of the first half. They put the Hoops under some real pressure with Darragh Markey looking lively playing in behind Adam Foley who was a handful for Pico Lopes.

Markey had the first chance of the game inside two minutes but he couldn’t test Alan Mannus in the Rovers goal. Within a minute Foley did so with the goalkeeper having to bat behind the former Finn Harps man’s effort to earn United an early corner kick.

The visitors had a couple of early corners which proved fruitless and gradually Rovers warmed into the affair. The Hoops were always going to be a danger to Kevin Doherty’s side particularly when Jack Byrne was on the ball. The Republic of Ireland international was constantly looking to slide the ball in behind the Boynesiders back three.

The dead ball was always going to be a threat to the visitors with Byrne’s delivery and he had eight opportunities in the opening half to deliver into the box from corner kicks. Lopes went close when he got his head on a Byrne corner on 13 minutes but the first goal of the game came from open play midway through the half.

Sean Gannon raced onto a pin point pass from Byrne. He held off Weir and taking the ball into the box he fired the ball low to the left by Colin McCabe.

The lead was doubled four minutes from the break as Byrne picked up an Andy Lyons pass and unleashed a driven, dipping and delightful effort that fizzed by McCabe to give the Hoops a 2-0 lead.