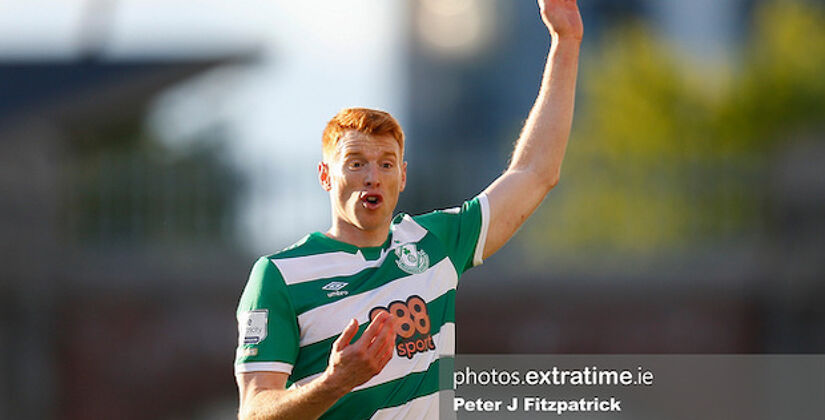 Rory Gaffney’s 25th minute strike was the difference between Shamrock Rovers and Bohemians tonight in a pulsating clash in front of a packed-out Tallaght Stadium.

The teams came out to a raucous greeting, both sets of fans providing colour and a rip-roaring atmosphere. The game duly delivered, a fascinating high stakes tactical battle with both sides trying to retain possession of the ball.

It was the champions who got to the pitch of the game the quickest. The rotations in central areas from Jack Byrne, Graham Burke and Dylan Watts bamboozled the Bohs defence.

A deluge of rain 45 minutes before kick-off ensured that the pitch was saturated, the ball zipped about which made for an entertaining spectacle even if it wasn’t televised live.

Just six minutes in, the home side could have been in front. An excellent first-time ball over the top from Gary O’Neill saw Gaffney in the clear down the right, he dinked his effort over Talbot, but the ball skewed across the face of goal.

Gaffney put his side deservedly in front in the 25th minute. Some excellent interplay down the Rovers’ right between Ronan Finn and Byrne resulted in a Finn cross which was not dealt with, and Gaffney slotted beneath James Talbot.

Bohs last suffered defeat in Tallaght stadium in April last year and are unbeaten in their last four games against the Hoops, winning three.

They upped their game after going behind, keeping the ball for longer periods as Rovers continued to look dangerous on the break.

Ten minutes after going ahead, Gaffney should have got his and Rovers’ second goal. Magnificent build-up play on the edge of the Bohemian box, resulted in a Watts deflected shot which found its way into the path of Gaffney who continued his run. The Galwegian headed into the ground, but Talbot denied him with a fantastic save to keep his side in the game.

Ryan Cassidy who was leading the line the absence of the suspended Promise Omochere tried to stretch the Hoop’s back three. A run to the near post nearly saw Cassidy nod in his first goal for the club, but he just couldn’t get enough purchase on it.

Just before the halftime whistle, the away support was outraged. A fantastic Dawson Devoy diagonal found Kris Twardek who looked to have got goal side of Lee Grace. The Canadian winger was hauled down, but referee Rob Hennessey decided not to give a penalty. As Grace was last man it could have resulted in a sending off too.

The second half started at just as furious pace as the first was played in. Stephen Mallon was causing the home side problems down the left, his dribble and shot resulted in a Bohs corner which Jordan Flores flashed at, the Rovers clearance was just past Alan Mannus’ near post.

Bohs continued to have lots of the ball, Devoy and Flores provided a good base in midfield to build from as the home side look to spring counterattacks.

Liam Burt was introduced for Cassidy and played through the middle, hoping his pace could cause problems for the Hoops back three. However, it was Twardek who had a great chance to equalise. The ball fell to in the box at the feet of the Bohs winger, substitute Barry Cotter expertly blocked his drilled effort.

Rovers should have had their insurance goal three minutes from the end. Aaron Greene was denied by a point-blank Talbot save before Daniel Mandroiu somehow diverted the follow up wide as the goal gaped.

Next on the horizon for the champions is a trip north up the M1 on Monday night to face an unbeaten Dundalk side buoyed by their very own Steven Bradley.

Bohemians will welcome near neighbours Shelbourne to Phibsborough in another Dublin derby.