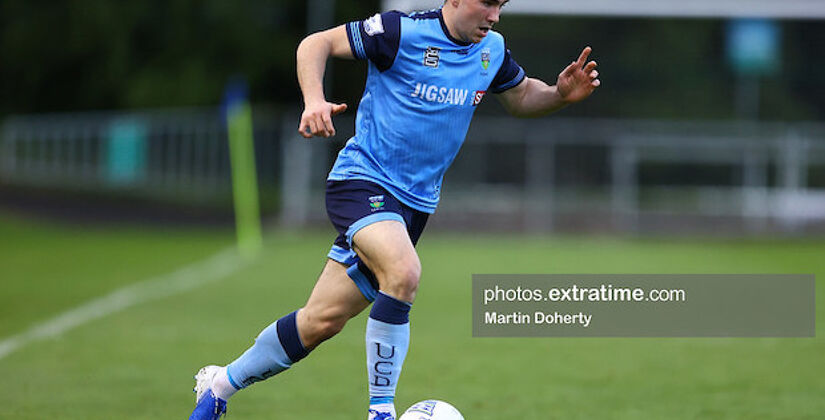 Basement side UCD bagged their first win of the campaign after a late Liam Kerrigan goal helped cut the gap to Finn Harps in the table to two points.

After a scoreless first half and a second half of few clear cut opportunities, Kerrigan popped up with a header to earn the victory for the university outfit.

Harps launched a few late balls into the area but the Students held firm in stoppage time.

The battle at the bottom was big in the minds of both sides prior to kick off with UCD still in search of their first win of the season while Harps were looking to pull clear of the wrong end of the table.

Andy Myler name an unchanged side from that which drew at home to Dundalk in their last outing while Ollie Horgan only introduced one change to his line up after their defeat to Shamrock Rovers - Jose Carrillo in for Erol Alkan who dropped to the bench.

The opening quarter of an hour was devoid of any real threat towards either goal but then came a scare for the visitors as Eric Yoyo's headed backpass was nearly seized upon by Filip Mihaljevic; fortunately for UCD, Kian Moore was quick off his line to clear.

Just over 20 minutes in UCD carved out an opening with a searching ball forward from Jack Keaney, it fell nicely at the feet of Kerrigan but his shot was smothered by Mark McGinley.

As the game began to open up as it approached the half hour mark, Mihaljevic failed to connect with a low Jesse Devers cross as both sides began to ask some questions.

A UCD set piece was the next move, Dara Keane managed to get a shot off but McGinley had an answer to it.

A few moments before half time, Harps had an effort cleared off the line as Rob Slevin headed towards goal with Dara Keane in the right place to keep the score level at the break.

The second half started in a similar vein to the first, even to go as far as another backpass scare - this time for the hosts with McGinley able to get to the ball ahead of Colm Whelan.

UCD were dealt a blow in the moments approaching the hour as Whelan looked in some discomfort after a clash with Conor Tourish. Fortunately the striker was able to limp off, despite the presence of a stretcher at the ready after several minutes of stoppage.

As the game entered its final phase, both sides continued to fight for every ball as Barry McNamee saw an effort blocked for the hosts.

With just shy of ten minutes to go, UCD broke the deadlock to put them on course for their first win of the campaign. Jack Keaney won back possession in the midfield and a short pass to Evan Caffrey allowed the number nine to cross the ball in for Kerrigan to head the ball beyond McGinley.

Six minutes of stoppage time gave the hosts hope as they piled the pressure on the students' backline. Ryan Rainey headed wide with one opportunity while Eric McWoods headed just over with another. Luke Rudden fashioned another chance as the game ticked away but Eric Yoyo put in a textbook challenge to deny the youngster.

In a bid to snatch a late dramatic point, McGinley pushed forward for a corner but UCD cleared their lines to bag their first three points of the season.