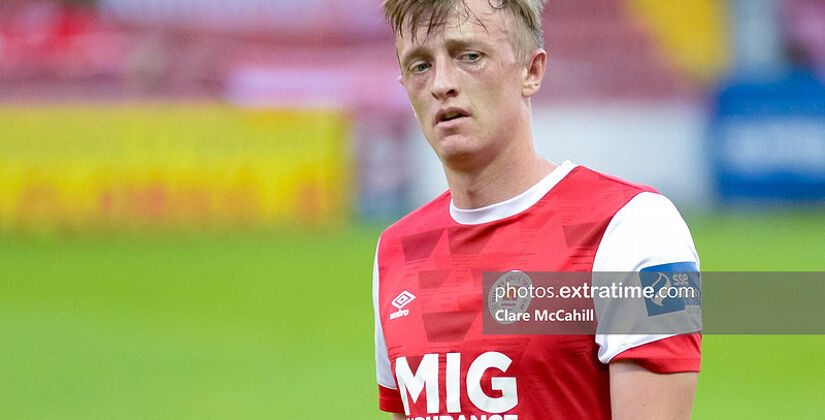 St Patrick's Athletic moved joint top of the league after a 2-0 win away at Finn Park.

After a keenly contested first half, goals from Jack Scott and Eoin Doyle after the midway point in the second half put the game in the visitors' control.

Harps remain at the opposite end of the table, still chasing their first win but worryingly have only netted one goal in their first four outings.

The hosts went into this fixture still in search of their first three points while the visitors had won two of their first four outings, losing the other two.

Neither side got off to a flyer in this fixture with Yoyo Mahdy heading over with the only decent chance inside the opening twenty minutes.

The visitors began to settle into things and only a Mark McGinley punched clearance kept Eoin Doyle from opening the scoring.

At the other end, the post kept the score down as David Webster hit a low effort beyond Joseph Anang, the ball was recycled in, but his follow up chance was blasted over.

Beyond the half hour and as the match approached half time, each team had one chance a piece as Filip Mihaljevic headed straight into Anang's hands. Eoin Doyle had the other opportunity but a tackle from Ethan Boyle thwarted his chance at goal.

Darragh Burns fashioned the first chance of the second half less than 60 seconds in but his effort flashed across the face of goal. Mahdy was presented with a good opportunity at the other end but his shot was tame as Anang saved.

Mihaljevic had an effort on the hour, but the onrushing Anang closed down the angle and blocked the shot on goal.

Just five minutes later the visitors broke the deadlock. Ian Bermingham had a close-range strike saved by McGinley who pushed it onto the post and allowed Jack Scott the easiest of finishes.

It could have been a two-goal cushion for Tim Clancy's side just moments later but Chris Forrester placed a shot narrowly wide.

With just over ten minutes to go, the score was 2-0 with Forrester bagging the assist. He whipped in a free kick from the left and Eoin Doyle rose highest in the area to head beyond the grasp of McGinley.

Harps - always keen to fight until the final whistle - still had efforts to reduce the deficit but to no avail as Eric McWoods had the best chance, only to be denied by Anang.

Forrester had a late speculative effort saved as the Saints return to Inchicore with three points.