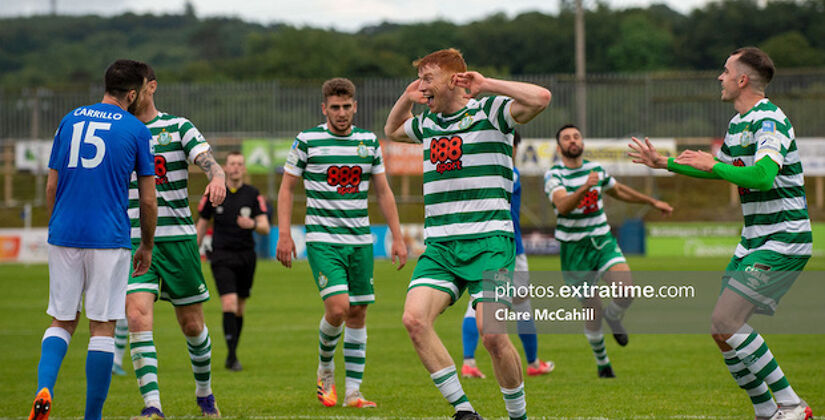 Shamrock Rovers can switch focus to the Champions League next week after a 1-0 win in Finn Park on Friday that kept them ten points clear at the top of the table.

A Rory Gaffney goal on the brink of half-time was the difference between the sides as the striker grabbed his fourth goal in his last seven games.

The Hoops dominated possession throughout the game at Finn Park as Ollie Horgan packed out his defence. Rovers had to be really patient as the probed for weakness at the back.

They methodically moved the ball left to right and back again through Gary O’Neill and Chris McCann. Under pressure the home side conceded six first half corners that, with Jack Byrne out injured, Dylan Watts put into the danger zone.

Gavin Mulreany came through traffic on several occasions to clear and did well to claim cleanly a number of crosses swung in by Ronan Finn and Sean Gannon on right and Sean Kavanagh off the left.

The home team had just the one chance in the opening 45 minutes when Barry McNamee let fly from outside the area forcing Alan Mannus to get his white jersey dirty.

It looked the half time whistle would blow with the game at a stalemate until Gaffney found himself a pocket of space nearly 30 yards from goal picking up the ball from O’Neill.

For once a Blue shirt didn’t get close, and the Galwegian’s low driven left foot effort found the back of the net for his sixth of the season.

The second half continued in the same vein as the first with Hoops keeping the ball. Mulreany twice came quickly off his line quickly to snuff out chances when Aaron Greene had the ball at his feet in the Harps penalty area.

On the odd occasion Harps got forward they looked to utilise Conor Tourish’s long throws with O’Neill doing well to block Barry McNamee’s shot when the ball came to the Harps captain free on the edge of the Rovers area.

Having just come on 73 minutes, Richie Towell almost scored with his first touch. He stole in at the back-post but his side foot volley of Gaffney’s cross just drifted wide of the frame of the goal.

That was as close as they came to doubling their lead although substitute Aidomo Emakhu should have added to the Hoops tally when he got in one-on-one only to play his shot straight at the Harps ‘keeper in injury time.

Results elsewhere mean that Harps remain in the relegation play-off three points above basement side UCD and ten behind Drogheda United directly above them in the table.

The win was Rovers’ third in eight days and marks another stepping stone as they look to retain their league title.