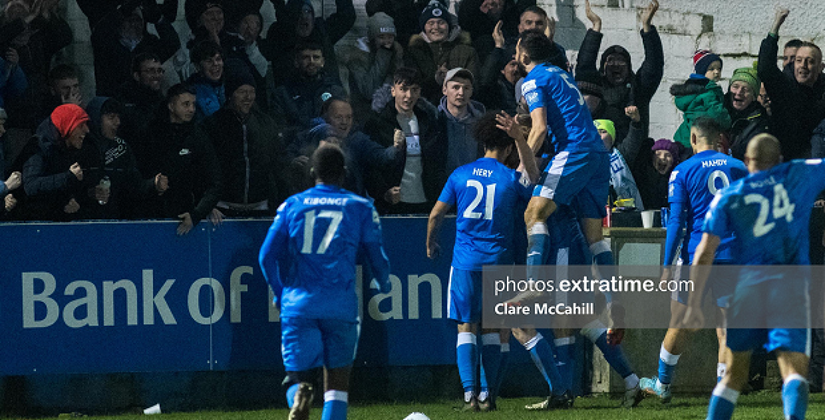 Both sides fought it out in what was a physical game in Ballybofey. Referee Damien McGraith tried to keep a lid on it with 8 yellow cards, including a controversial second yellow for Bohemians’ star-man Promise Omochere.

Bohemians had the best chance of the first half within the first five minutes. A short corner was played to Dawson Devoy on the edge of the box who rolled it to Max Murphy who fired it to the right-hand side of the goal. It took a fantastic save by Mark McGinley to keep the ball out.

Five minutes later and it was Murphy who lost possession in his own half. Harps played it forward quickly and it took a good block from James Finnerty to keep the scores level.

Direct balls into the target men of Omochere and Filip Mihaljevi? is how both sides were attempting to play and it was the contest between Ethan Boyle of Harps and Omochere that almost boiled over after 26 minutes.

In response to an earlier foul not given against him Omochere threw a Harps player to the ground, Boyle squared up to him and was shoved back by the Bohs striker. Three yellows were given, one each to Boyle and Omochere and another to Yoyo Mahdy of Harps for getting involved.

The first half ended scoreless as neither side had any end product.

The second half was a much busier affair. On 51 minutes a cross from the inside right by Dawson Devoy was poorly cleared by the Harps defence and Omochere had a poacher’s instinct to poke the bouncing ball down into the left corner to give Bohemians the lead

The goal seemed to awaken Finn Harps. A quick counter through the centre and Mahdy played it through to Mihaljevi? who was clear on goal. His touch let him down, but the momentum was with the Donegal team.

On the 65th minute Ryan Connolly received the ball just inside his half, beat his man then played a one-two with Bastien Héry. He ran onto the return ball inside the Bohemians box and buried it with his left foot across the keeper into the top right-hand corner.

Omochere was not to be silenced however and he turned and shot hitting the crossbar on the 70th minute. He had an even better chance on 82 minutes, but his chipped finish was cleared off the line by Ryan Rainey

Harps however kept pushing and sought to win the ball high up the pitch, Eric McWoods the substitution had a good impact in winning aerial challenges.

The most controversial moment of the match came on 88 minutes when Omochere received his second yellow. A ball was headed up to him and he made contact with Boyle’s face with his elbow and the ref gave him his marching orders.

It was to prove the last big moment of the game as Harps were able to survive successive long throws from Bohemians to get their first point of the season in front of their home crowd.