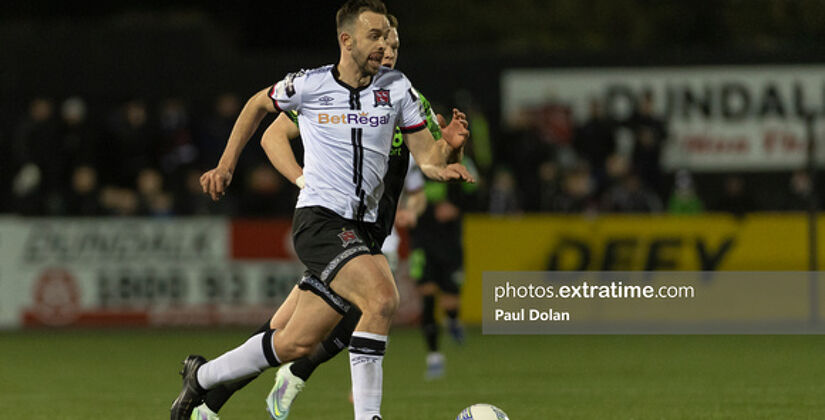 A comfortable 2-0 victory for Dundalk as they hosted UCD at a chilly Oriel Park. Close range finishes from Daniel Kelly and Pat Hoban ensured that the pre break loss to neighbours Drogheda United was swiftly put to bed.

Dundalk handed out a full home debut to defender Darragh Leahy and ex UCD midfielder Paul Doyle returned to the starting lineup as they sought their second win of the season against winless UCD. The Students arrived at Oriel Park on the back of a 1-1 draw with Bohemians before the international break and they had Evan Caffrey amongst their starters- the number 9 scoring for Tom Mohan's Under 19s in their midweek victory over Armenia.

Three Dundalk players were away with the Wales Under 21 squad- Joe Adams and Dan Williams returning to take spots on the bench while Nathan Shepperd remained ever present as the Lilywhites' number one between the sticks.

The home side were the dominant side in the opening quarter with Steven Bradley hitting the bar after 5 minutes- either side of efforts from Pat Hoban and Robbie Benson which failed to unduly trouble Lorcan Healy.

However, the netminder could do nothing about the opener after 16 minutes as Mark Connolly's threaded ball from defence allowed Pat Hoban and Dan Kelly to link up on the edge of the UCD box. The former Bohemians winger spun his marker to collect the pass, sidestepped the diving Healy and slotted into the net to the delight of the home support.

To their credit the visitors fought back and Colm Whelan stung the palms of Nathan Shepperd following a neat move down the UCD right less than five minutes later. The Lilywhites regained the upper hand in the latter part of the half as Robbie Benson continued to provide the greatest attacking threat. The Athlone native fired narrowly wide after some tricky footwork on the edge of the UCD penalty area on the half hour before glancing a header off the post following a cross from the industrious Pat Hoban as the half drew to a close.

Dundalk's number 9 found the net himself early in the second half as  Lewis Macari's raking long ball from the right wing was finished first time to the net to double the scoring and edge the Loughrea native closer to the all time scoring record, currently held by Joey Donnelly.

In truth, that goal was the sealing of the game as UCD did force a fine save from Shepperd- the Welshman diving low to his left to deny Dylan Duffy a consolation free kick goal- but Healy remained the busier of the two keepers. Strong saves from a vicious Dan Kelly effort and Steven Bradley's angled drive kept the visitors in the game however, with the withdrawal of Colm Whelan and Liam Kerrigan with 20 minutes left to play, it was a quiet end to the game.

Dundalk finished with 6 ex UCD players on the field and 3 points off it as thoughts turn to next week's fixtures- UCD face an uphill battle to take anything from Derry City on Monday while Dundalk travel to Inchicore to take on St Patrick's Athletic on Friday.