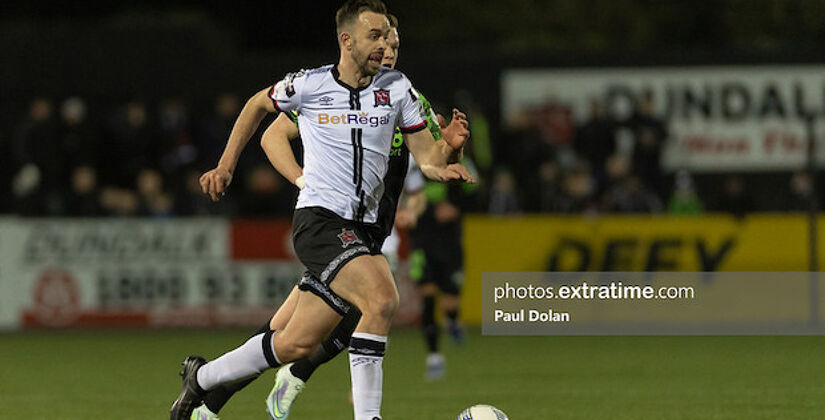 A Robbie Benson goal ten minutes from time gave Dundalk a deserved breakthrough at Oriel Park. They edged out this top-of-the-table clash against Shamrock Rovers 1-0 to move within five points of the league leaders with a game in hand.

Dundalk were deserved winners but it was a game that could have gone either way. Dundalk enjoyed the lion's share of the ball without etching out too many chances while Rovers kept Dundalk on their toes with quick moving counter attacks.

Rory Gaffney and Danny Mandriou were lively in the first half and both had chances to put Rovers ahead after catching out the Dundalk defence, but neither could direct their efforts on target.

Andy Boyle and Patrick Hoban both headed efforts wide either side of the Hoops goal in the first half and there were a number of deliveries that may well have been turned home with a slight touch.

That said, Alan Mannus had a quiet enough shift, his only save in the first half was attending to a cross turned shot via a deflection off Sean Kavanagh’s toe.

Scoreless at the break, the second half settled into a similar pattern; Dundalk largely on top bar occasional forays forward by the visitors.

Paul Doyle and Greg Sloggett helped Dundalk win the battle in the middle against a formidable Rovers midfield, stacked with former Lilywhites Richie Towell and Ronan Finn. But the breakthrough just wouldn’t arrive. The home side racked up three yellow cards in the second half as their frustration grew.

To Rovers' credit, Dundalk were short on clear-cut chances despite their dominance. It was going to take a moment of magic. And ten minutes out, the Lilywhites would manage just that.

Lewis Macari delivered a ball from play into the box that Robbie Benson slipped between the defenders and doing remarkably well to get onto, he volleyed it into the roof of the net at full stretch for his third of the season.

Hoops skipper Finn received his marching orders soon after the goal following a second yellow for his late challenge on Darragh Leahy.

Finn walked off to the tunnel without even looking up to see referee, Neil Doyle’s, reaction. That seemed to mark the end of Rovers' fight as the game was seen out somewhat comfortably by the home side after they nosed in front.

The Hoops remain at the summit of the table but the Lilywhites have closed the gap to the top and increased their margin to three points over third placed Derry City who dropped points at home to Drogheda United.

Stephen O’Donnell is reluctant to even speak of a title challenge, citing Dundalk as going through a rebuilding phase. But the table makes for pleasing reading this evening for Dundalk fans after a hectic pre season. The remain undefeated in the league at Oriel Park this year.

For Rovers, who were missing the injured Jack Byrne and Graham Burke, it was their fourth defeat of the season - all coming away from home - and the champions must now refocus for the visit of Bohemains to Tallaght next Friday night.