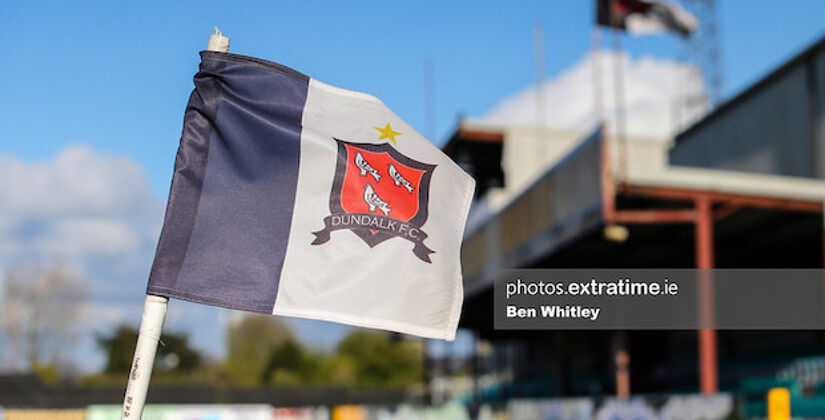 Dundalk were held to their fifth draw in six games by Shamrock Rovers on a crisp, cool evening in Oriel Park.

The game finished scoreless with both goalkeepers making a series of great saves in an entertaining nights action.

Dundalk set up in a traditional 4-4-2 formation, Robbie Benson played on the right side of midfield whilst John Martin partnered Patrick Hoban up top.

Leon Pohls was in the Hoops goal for only is third appearance in three seasons. The homes side aimed to test the German ‘keeper early on.

Benson set the tone for Stephen O’Donnell’s side, thundering into some early challenges which encouraged the home crowd.

With just seven minutes played Dundalk struck the woodwork. Hoban won the ball in midfield from Jack Byrne. Dan Williams picked up possession and dinked the ball to the far post.

Pohls tried to claim but collided with his own centre-half Sean Hoare, the ball dropped to Benson as Rovers defenders tried to scramble back on the line, but his volley hit the outside of the post from 14 yards.

The Lilywhites allowed the Hoops have the ball in their own half, but Rovers’ build-up play was slow as they struggled to find the plethora of midfielders in dangerous areas.

When the away side went slightly more direct, they looked more dangerous. Richie Towell provided a great run down the left channel; he was found by a wonderful Hoare pass. Towell controlled well, and forced a magnificent fingertip save from Nathan Sheppard.

Dundalk continued to look more threatening of the two sides, despite having less of the ball. A succession of corners whipped underneath Pohls’ crossbar resulted in a towering Connolly header, but the Clones man saw it cleared off the line by a collection of Rovers defenders.

Hoban also had a header at goal, but Pohls got down sharply to save as the ball looked to be heading into the bottom corner.

The second half started in the same vein as the first, Lee Grace was the Rovers player who gave possession away in a dangerous area. Williams picked up the loose ball and whistled a shot that dipped and swerved just over Pohls’ crossbar.

Finally, Rovers created a chance of note in the 51st minute. Sam Bone tentatively went in for a challenge in midfield, but it was Graham Burke who won it.

His eye of the needle pass for Daniel Mandroiu had the former Ireland underage international away, he powered towards goal as the angle tightened and fired a rocket of a shot which Shepperd did well to block with his legs.

This seemed to wake Stephen Bradleys side up. Two minutes later, Burke’s dazzling footwork bamboozled Andy Boyle and fired an effort across goal that nobody was on the end of.

A magnificent reverse pass from Byrne, saw Towell swivel and strike his effort from inside the box at a narrow angle which thundered off Shepperd’s crossbar.

As the Hoops continued in the ascendency, O’Donnell went to a 4-5-1, with Benson dropping into midfield and Martin playing on the right wing as Dundalk looked to shore up defensively.

It looked like the deadlock would finally be broken when substitute Aaron Greene powered a downward header that looked destined for the far corner only for Shepperd to scramble across and save. The home crowd applauded what was a wonderful save from the Welsh netminder.

Anything Shepperd can do, Pohls could do too. A terrible clearance form Pico Lopes went high into the sky, Hoban powered a header which Pohls did marvellously well to save low to his right.

A brilliant surging run from Greg Sloggett in added time down the right-hand side saw the midfielder cross for Hoban who had the goal at his mercy but fired over from 12 yards when many would have backed the Galwegian to score.

Dundalk’s next trip is a short one, they face Louth rivals Drogheda United at Head in the Game Park on Friday night.

Shamrock Rovers take on the other Rovers, Sligo on Friday night at Tallaght Stadium.