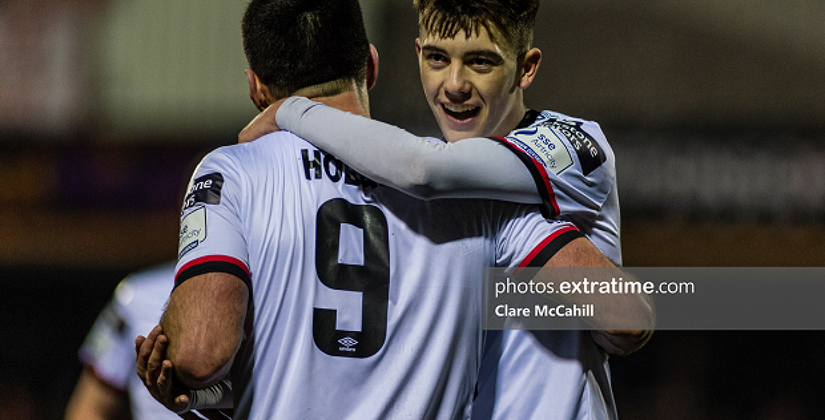 A masterclass from Steven Bradley gave Dundalk their first three points of the season when they won 3-0 at home to Finn Harps.

Goals either side of halftime put Steven O’Donnell’s side in the driving seat, they didn’t look back from there.

The Ballybofey side dominated the opening exchanges but went down to two magnificent Bradley goals, the other added by Sam Bone.

Ollie Horgan will be rueing his sides missed chances as Harps arguably could have been three in front before Dundalk opened the scoring just before halftime.

In the 12th minute it looked certain that Harps were going to take the lead. A poor touch from Lewis Macari was pounced upon by Ethan Boyle, he then powered through Andy Boyle before laying it to the left for Filip Mihaljevic, the Croatian rounded the ‘keeper and looked destined to score, until Macari atoned for his error and cleared brilliantly off the line.

Six minutes later, Mihaljevic broke in behind the Dundalk defence, he dinked the ball to the back post and Barry McNamee headed wide when he ought to have at least hit the target.

The Dundalk passing was edgy. Andy Boyle played a wayward pass back to Nathan Shepperd who could only clear for a throw 15 yards from goal. From the resulting Ethan Boyle long throw Ryan Connolly swung an effort that had Shepperd scrambling across to save.

A Ryan Rainey corner nearly found the net, Shepperd did well to claw it away, as the ball nearly crept its way inside the near post in the 23rd minute.

Dundalk were struggling, Harps were playing the game on their terms. Macari was taken off after 25 minutes which looked to be a tactical switch, with the naturally left footed Robbie Benson now at left back, Daniel Kelly was on the left wing.

Just after the half hour mark Harps should have taken the lead once more. Mihaljevic intercepted a poor Benson back pass, he nutmegged Andy Boyle before striking his effort off the bar as the angle narrowed from around 14 yards out.

With five minutes to before the half, Dundalk finally managed to maintain some possession. A string of passes found their way back to Shepperd, and he hit a long diagonal searching for Bradley.

The Scot who had largely been anonymous in the half, harried Mark Timlin, won the ball back, cut inside and feathered a lovely finish towards the far bottom corner, which took a slight nick of Mark Webster. That was his third goal in three games for the on-loan Hibernian winger.

Somehow Dundalk found themselves in the lead going into the break after being dominated throughout the first half. That old adage still remains, if you don’t take your chances, you will be punished.