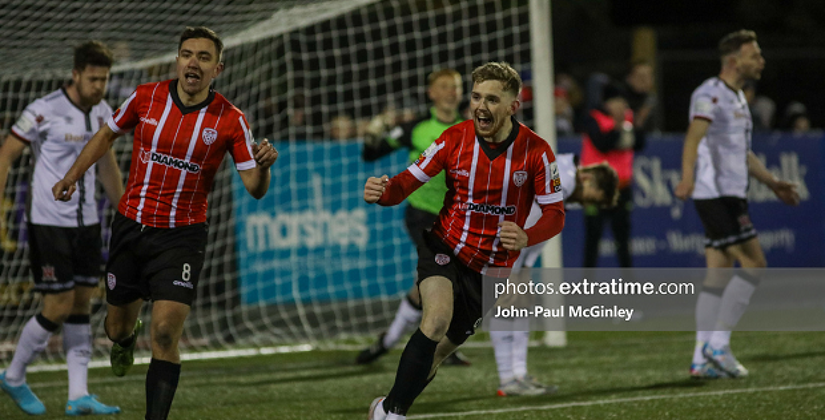 It was honours even at Oriel Park in the battle of Stephen Kenny’s former title winning clubs as Dundalk and Derry City played out a 2-2 draw on the opening night of the 2022 season - a game as full of flair as flares as the pre-season no pyrotechnics pleas fell on deaf ears for both sets of fans.

On the touchline, two of Kenny’s ex midfield generals faced off against each other in a hotly anticipated campaign opener as Stephen O’Donnell’s Lilywhites began their rebuilding process under the former skipper with eight players making their competitive starting debuts for the club. For Derry City, their second campaign with Ruadhraí Higgins saw just three starting competitive debuts as they sought to build on an encouraging campaign last season.

The visiting Candystripes had the first opportunity of the game with debutant Mark Connnolly, on loan from Dundee United, clearing off his own line following Jamie McGonigle pouncing on a misplaced Andy Boyle pass within the opening five minutes.

However, Dundalk settled into the game and their best efforts in the opening exchanges came from Sam Bone with the right back first seeing a low effort from the edge of the box pushed wide by Republic of Ireland Under 21 ‘keeper Brian Maher before resetting his sights later in the half. Once more the ex-Bray stopper was equal to the shot as he clawed it away for a corner,

Tempers flared midway through the half as a spot of pinball in the Derry City box saw Steven Bradley attempt a bicycle kick, his raised foot caught a Derry defender and the ensuing disagreements saw five players booked, including Bradley.

Within ten minutes, the winger had made a more positive impact as he latched onto an incisive pass from Dan Williams, cut inside the Derry City cover and placed a low strike beyond the reach of the sprawling Maher to open the scoring on 32 minutes.

Higgins’ men equalised less than ten minutes later as Jamie McGonigle raced into space down the right-hand channel following a quick Derry City break and his pull back was sent into the net from close range by the onrushing Joe Thompson.

The second half saw Dundalk almost regain the lead within the opening thirty seconds as a Patrick Hoban snapshot was repelled in the driving wind and rain by an alert Maher who denied the striker once more in the 70th minute, throwing himself to his left to bat away a swivelled effort from just inside the box.

After taking the ball off the goal line in the first half, Mark Connolly forced it over the same line in the seventy third minute to allow Dundalk to retake the lead. The Clones man finding the net from close range as Derry failed to clear a Robbie Benson corner kick.

However, much like in the first half, the lead didn’t last very long as substitute James Akintunde skipped past Sam Bone and Greg Sloggett to cut the ball back for Jamie McGonigle to find the net and level up the scoring.

It was the Candystripes who almost snatched all three points as they hit the bar twice in the closing moments, once from an overhit cross and then, a minute later McGonigle crashed an effort off the upright as he broke clear of the Dundalk defence,

A pulsating encounter which ended with the spoils shared and both sets of fans looking forward to a season which, on the basis of tonight’s encounter, will have plenty of goalmouth action.