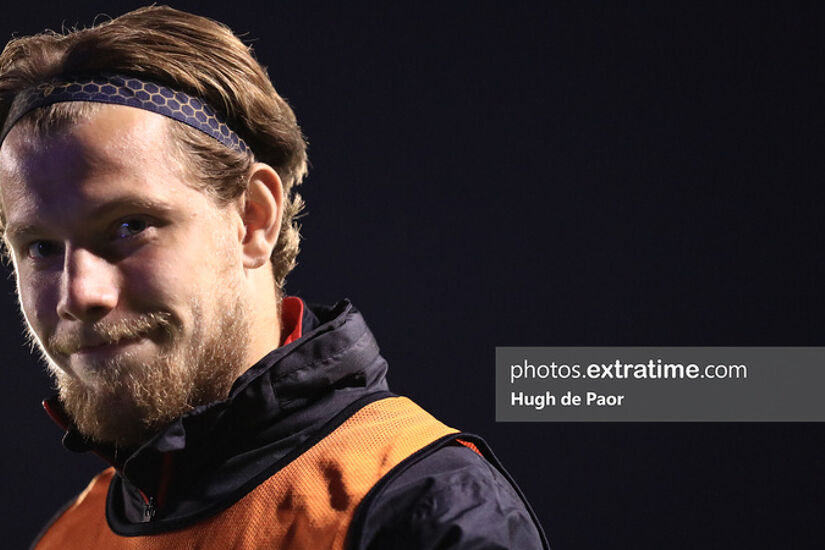 Despite a nervy few moments after conceding to a late Ethan Varian header, Dundalk held out for a 2-1 victory which secured third spot and European qualification for next season, courtesy of first half goals from David McMillan and Runar Hauge.

For the final home game of Dundalk’s 2022 season, Head Coach Stephen O’Donnell made just a single switch following the pulsating three all draw with Sligo Rovers at the same venue a week previous. On loan Scottish winger Steven Bradley replaced Welsh Under 21 international Joe Adams in possibly his final outing at Casey’s Field.

Declan Devine arrived on the Carrick Road for the first time as manager of Bohemians and shuffled his pack on the back of a draw with Finn Harps at Dalymount Park last weekend. Republic of Ireland Under 19 goalkeeper Reece Byrne replaced Tadhg Ryan between the posts with Jordan Doherty replacing Josh Kerr in defence.

Further up the field, winger Declan McDaid dropped out at the expense of the recalled Liam Burt while James McManus took the place of last week’s skipper Conor Levingston.

A couple of half chances in the opening quarter fell to Liam Burt- Nathan Shepperd’s low parry denying the winger on four minutes before he rustled the post with a header ten minutes later.

However it was Dundalk who opened the scoring on 21 minutes- David McMillan curling a free kick into the top corner of Byrne’s net after Rory Feely  was adjudged to have fouled Ryan O'Kane on the corner of the edge of the Bohemians penalty area. The second goal of the season for the veteran frontman in front of the Casey’s Field crowd after finding the net in a 3-0 win against UCD in July.

Feely was keen to make amends for the foul and his towering backpost header was smothered by Nathan Shepperd on the half hour. The Lilywhites doubled their lead as the break approached. Holding midfielder Alfie Lewis crunched into a midfield tackle and John Mountney picked up the break.

He looked for the run of Hauge and the Norwegian winger checked back before firing through the legs of Reece Byrne. After conjuring up a goal for Ryan O’Kane last week, this time it was Hauge’s turn to find the net himself- his second home goal of the campaign, after netting a penalty in the home win over Drogheda United.

Nathan Shepperd’s last home clean sheet came in that game and he was called into action on the hour mark, flinging himself to his right to claw out a close range Bohs header. The Dalymount men were a constant threat from set pieces throughout the game as former Lilywhite Jordan Flores was in charge of corner kicks.

Skippering the side, his left footed deliveries seemed to always find a Bohs head.

Indeed it was the ex Wigan Athletic man who set up Boh’s consolation goal- his corner kick headed to the net by Ethan Varian for the former Stoke City man’s second goal in two games. Indeed they almost snatched a point in their very next attack- James Clarke’s drilled right wing cross evading a couple of sliding Bohs’ players and drifting wide of the far post.

Not a classic game in any sense of the word but, ultimately, in the end Dundalk held on for the three points that, courtesy of Sligo’s win over St Patrick’s Athletic, saw them gain European football for next season. With three loanees starting and a number of others yet to commit for 2023, it remains to be seen how many of those who achieved this feat will be at the club next year to represent the club.

In the minds of the Dundalk faithful, that remains another night’s work as the vast majority of the three thousand fans left Casey’s Field happy in the knowledge that three points and third place was achieved under the first season of new local ownership and in Head Coach Stephen O’Donnell’s maiden campaign back at the Carrick Road venue where he earned the adulation of the home crowd as a player.

The joyous crowd which stayed back to show their appreciation for the squad’s efforts throughout the season indicate that his post playing return has gotten off to a good start.