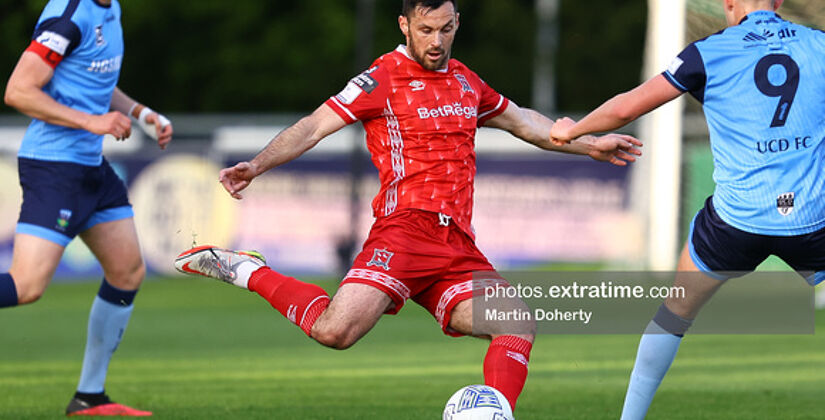 It was a second half to forget for Bohemians on Friday night at Oriel Park as they conceded three goals in forty five minutes to crash to a 3-1 defeat.

Keith Long’s men arrived at the County Louth venue on the back of a draw at Derry City last week- the third time they had shared the points in their previous four games. Buoyed by that result, former title winning Dundalk midfielder Long selected an unchanged lineup. On the flip side, Dundalk’s draw at UCD last Friday resulted in four changes for this game, including the returns of Steven Bradley and Robbie Benson and a completely new starting centre half partnership between Mark Connolly and Sam Bone.

It was Connolly who had the first real chance of the match as he nodded a corner narrowly wide following Talbot’s denial of Joe Adams within the opening five minutes. The visitors took the lead on the quarter hour courtesy of a training ground routine corner kick of their own- a low driven corner was added to by Levingston and defender Ciaran Kelly bundled it to the net from close range.

Bohs almost doubled their lead shortly after but Nathan Shepperd, who received his second consecutive Supporters’ Player of the Month award before the game, did well to deny Dawson Devoy from close range following good buildup play from Promise Omochere.

The duo combined well later in the half only for former Bray Wanderers underage star Omochere to shoot off target, moments after James Talbot had flung out a hand to touch a thumping Benson drive onto the crossbar.

Ex Sunderland stopper Talbot excelled again as the half drew to a close- spreading himself well to prevent Daniel Kelly netting an equaliser after the former Bohs forward had broken free of the covering defence.

However, Dundalk were not to be denied the leveller for much longer as five minutes into the second half Robbie Benson teed up Pat Hoban on the edge of the area and the number nine thumped the ball low into the corner of the net to send the home crowd into raptures.

Both sides traded chances as both Kelly and Hoban saw efforts drift narrowly wide of Talbot’s left hand post before his opposite number saved a Burt effort and was then relieved to see a Ciaran Kelly effort roll wide of the post. The defender’s meandering run, after dispossessing Hoban on halfway, only ending with the trickling effort which shaved the butt of the upright.

Stephen O’Donnell didn’t wait much longer before taking action on the sideline, replacing Bradley and Adams with Paul Doyle and former Bohs fan favourite Keith Ward. Within five minutes, Ward had made his mark on the game- a sumptuous pass from deep split the defence to find Dan Kelly in space in the penalty area. Kelly drew the onrushing Talbot and slipped the ball to his left where the onrushing Robbie Benson virtually walked the ball into the net. Ward’s vision coming to the fore once again, just a couple of weeks after setting up John Martin for the winner against the last Dublin opposition to visit Oriel Park.

Shelbourne were dispatched 2-1 on that occasion, however Dundalk went one further against Bohemians as Paul Doyle notched a second goal in consecutive weeks, following his strike in Belfield last week.

The ball broke to the Westport native on the edge of the Bohs box and his deflected effort looped past a helpless Talbot to double the home side’s lead and cap a memorable second half display for the Lilywhites.

Next up for Stephen O’Donnell’s men is a trip to the Ryan McBride Brandywell Stadium where they will be hoping to close the gap on second place Derry City, while for Keith Long’s Bohemians it’s Sligo Rovers up next at Dalymount Park.