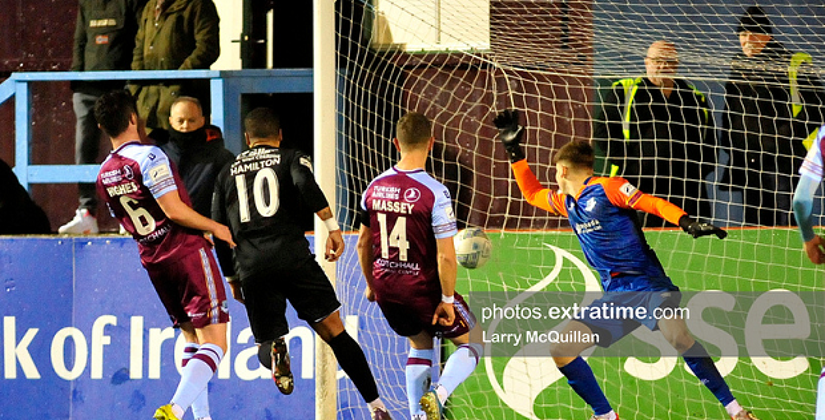 Seán O’Connor reports from Head in the Game Park.

Sligo Rovers put on a dominant display on Friday night, as three first half goals sealed three points for Liam Buckley’s side.

The damage was done in the first half in a commanding performance by the Bit O’Red. Headers from Lewis Banks and Jordan Hamilton put the visitors two ahead, before a screamer by Will Fitzgerald put the game beyond Drogheda’s reach.

Drogheda manager Kevin Doherty made two changes to the side that beat UCD 4-2 last weekend. Sam Long replaced Colin McCabe in goals, while Adam Foley came in for the injured Chris Lyons.

Liam Buckley made five changes to his Sligo side that drew with Derry City last weekend. Richard Brush came in for Ed McGinty. Niall Morahan, Jordan Hamilton, Paddy Kirk, and Max Mata all came in to the starting eleven, as Robbie McCourt, Greg Bolger, Aidan Keena, and David Cawley dropped to the bench.

Adam Foley had the first chance of the evening. His effort from the edge of the box was initially fumbled by Richard Brush who parried the ball at the second attempt.

After a bright start, Drogheda went behind on the eight-minute mark. Sam Long came to punch Sligo’s corner but missed and Banks was at the back post to head into an empty net.

The visitors were inches away from going two up minutes later. Mata’s close-range effort was expertly saved by Long before Deegan heroically blocked Mata’s follow up.

After sustained pressure, Sligo’s second goal came on 20 minutes. Mata’s dangerous cross found Hamilton, who on his debut, headed past Long to put the visitors two ahead. It was a nightmare start for Drogheda who had now given themselves a mountain to climb.

James Clarke almost put Drogheda back in it five minutes later. His looping header was saved brilliantly by Brush, as the hosts enjoyed their first spell of possession in the game.

Drogheda’s bright spell was short lived however, as Liam Buckley’s side made it 3-0 on 35 minutes. Sligo played some beautiful one touch football in the middle of the park before a cross field ball found Fitzgerald. He steadied himself on the edge of the box, before smashing a shot into the top right-hand corner.

Adam Foley hit the post from close range minutes later, but Drogheda looked all over the place the rest of the half and struggled to cope with Sligo’s attacking threat.

At the break, Drogheda made a triple change and switched to a back four for the second half.

On 50 minutes, Drogheda won a penalty after a handball in the box. Georgie Poynton had a golden opportunity to put his side back in the game but blazed his spot kick right and wide.

To their credit, Drogheda fought on backed by loud & loyal support. Darragh Nugent’s effort was saved on the hour mark, after a good spell of play by the hosts.

Drogheda threatened again minutes later. After some terrific link up between Dean Williams and Foley, the latter’s dangerous ball across the face of goal came to nothing.

Drogheda were vastly improved in the second half, enjoying more possession and the better chances, but in truth the damage was done in the opening 45 minutes. Liam Buckley’s side closed out the game comfortably. 16-year-old Killian Cailloce came on late in the game to make his league debut for Drogheda.

Sligo remain unbeaten this season and host Finn Harps on Monday night. Drogheda travel North to face Derry City and will be hoping to get back to winning ways after a difficult night.

extratime.com Player of the Match: Will Fitzgerald (Sligo Rovers)

Stephen Kenny: 'Playing for Ireland is very important for the players, it has a supersede anything they do in their career' https://t.co/3uTgcFXgVM pic.twitter.com/4VeaQmjgQI

Seán O'Connor has yet to write anything about themselves but click on the bio link to view all past work.