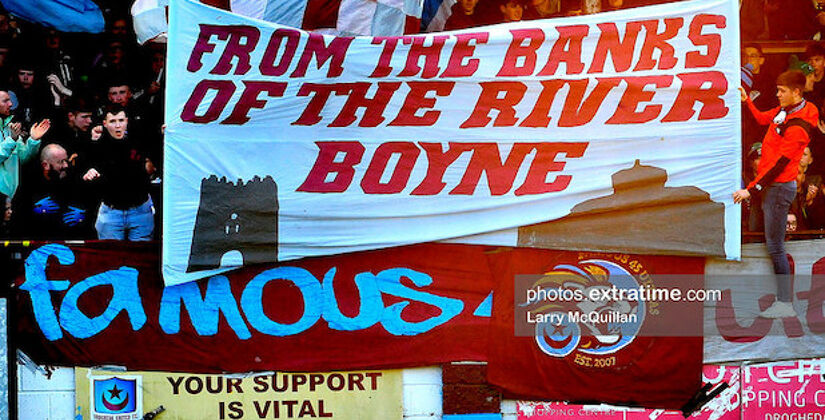 Two goals in injury time allowed Drogheda United gain a crucial win over Finn Harps as they aim to pull themselves clear of the relegation area. They recovered from the concession of an early goal in the second half and the sending off of Sean Roughan to get the three points.

Harps will be kicking themselves for allowing this one to slip though. Playing well and seemingly in control, they conceded a controversial late goal and so they remain second-bottom just ahead of UCD.

Drogheda made one change from the side that lost to Shelbourne last weekend. Chris Lyons was preferred upfront to Dean Williams. Harps made two changes from their home defeat to UCD. Yoyo Madhy and Jesse Devers both dropped out. They were replaced by Barry McNamee and Ryan Connolly.

The home side tried to get at their guests from the off. Darragh Nugent had an effort from distance that took a deflection but went narrowly wide. It was generally a tentative start from both sides as the play was reflective of both team’s recent poor form.

Harps did have an opportunity at the other end as a throw-in was only half-cleared. Bastien Hery’s effort went just over though.

Charlie Lyons was left cursing his luck as he was denied on a few occasions by a offside flag. He did seem to be correct to be aggrieved with one chance when the final touch seemed to have taken a touch from a Harps defender. Generally, the likes of Jose Carrillo and Rob Slevin were able to deal with most coming their way pretty comfortably.

Gradually Harps began to exert a degree of control in midfield and create a few more opportunities. Connolly saw a chance go wide from a Hery corner that wasn’t cleared effectively. Ryan Rainey had the best chance of either side as McNamee and Ethan Boyle combined to send in a cut-back to the midfielder. Despite having time, he was only able to shoot directly at Sam Long though.

A few isolated set-pieces from both sides were not able to really threaten either goal as the half came to an end.

It was the away side who struck for the lead at the beginning of the second half. Connolly floated in a free kick toward the area, Rob Slevin flicked it back across the face of the goal and Conor Tourish was alive to knock it home.

The home side strived to get back into the game as they created a number of chances down the right-hand side. Dane Massey headed wide from a free while moments later his cross was flicked on by the substitute Ryan Brennan, but Nugent was just unable to meet it. Brennan then had a chance which went past the post.

It seemed to have got worse for the Drogs as Sean Roughan picked up his second yellow for a late challenge on Filip Mihaljevic. The striker almost made him pay as his point-blank shot was saved by Long before it was scrambled off the line by Massey.

Remarkably, Drogheda fashioned an equaliser. Good work from James Clarke and Brennan created space for the substitute Evan Weir to score from close range. They seemed to actually up the tempo after that sending off. Adam Foley had a few half-chances that were just about handled. Ollie Horgan made some attacking subs as he went for the win.

He will have been irate at what happened next though. Jesse Devers looked to have beaten Weir for pace to run on to a ball down the line. The defender looked to have won the ball, but also came through the back of the attacker. It went down the other end and Brennan put in a low cross for Foley to tap home at the back-post.

Hery received a late red card for a kick out at Brennan before the win was sealed. Deegan played it forward to Foley who took it in his stride before playing it across to Nugent who scored with ease.

Delight for the home fans as they stop a run of four defeats on the bounce. Harps will be wondering how this game got away from them. They play Dundalk at home on Monday while Drogheda welcome champions Shamrock Rovers the same evening.