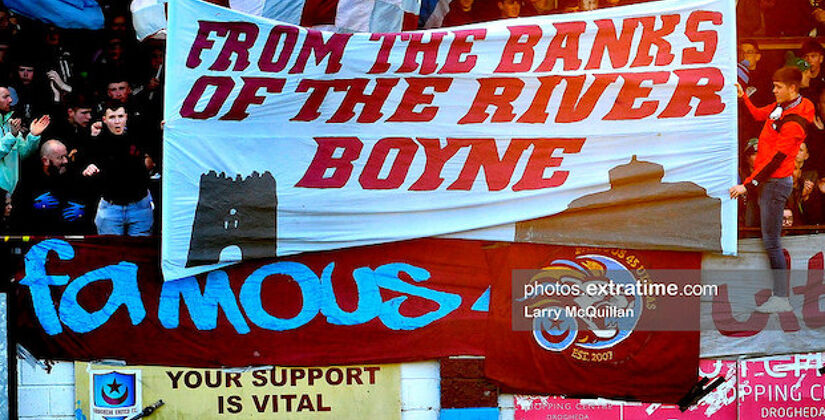 Patrick O Connor reports from Head in the Game Park

Dundalk failed to take advantage of one of their two games in hand over league leaders Shamrock Rovers when they went down to a 1-0 defeat against neighbours Drogheda United at the Head in the Game Park on Friday night.

In addition, their excellent ten game unbeaten run came to an end and they still remain ten points adrift of Rovers.

For their part, Drogheda will have experienced a sense of déjà vu after the game, as it’s the second time this season they have defeated Dundalk at home by a scoreline of 1-0 with Dean Williams the scorer of the only goal on both occasions.

This was the 170th Louth derby and there was a highly charged atmosphere with a thoroughly entertaining game played out before a full house of 2,158 spectators.

A total of seven yellow cards were issued by referee Neil Doyle, five of them to the home side, but while the tackles were flying in from start to finish it could never be described as a dirty game, merely a full- blooded local derby.

The game got off to the best possible start for Kevin Doherty’s side as they went ahead in the very first minute of the match.

Their first attack saw left back Evan Weir attack down the left touchline and whip in a dangerous cross which Dundalk centre half Andy Boyle only partially cleared.

The ball landed behind Williams in the box but he swivelled quickly and fired an unstoppable shot into the top right-hand corner of the net giving keeper Nathan Shepperd no chance.

Dundalk did respond positively to the early setback and attacked the Drogheda goal with purpose, Greg Sloggett and Daniel Kelly being particularly influential during this period.

The Lilywhites did channel a lot of their attacks down Kelly’s left wing and while he was very direct in his running, he found his immediate marker Luke Heeney a difficult opponent to beat.

Kelly’s best chance fell to him mid-way through the first half minute when he evaded Heeney and took control of a ball over the top. He tried to lob the home keeper Colin McCabe but his effort lacked precision and the ball sailed high and wide.

The frenetic nature of the contest continued right up the half time whistle with the last two minutes being particularly busy for referee Doyle when he issued three yellow cards before finally blowing the whistle for the break.

The second period was only slightly less frenetic as Dundalk went in search of an equaliser.

They did fire everything at the home defence but there was a large element of huff and puff about their attacks and towards the end of the game they resorted to long hopeful balls into the box.

The visitors did not have anybody with the creativity and vision of Drogheda’s Darragh Markey in the middle of the park, the diminutive midfielder was excellent throughout for the Boynesiders and he was full of running right to the final whistle.

Dundalk forced a series of corners during the five minutes of added time but they never made the breakthrough for the equaliser and in truth probably did not deserve it given the level of performance and commitment of their Louth neighbours over the course of the 95 minutes of action.