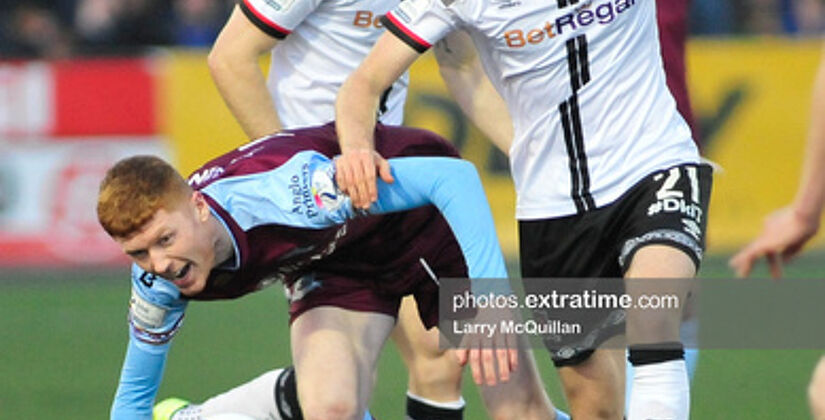 Dundalk recorded their first away win of the season with a 2-1 victory over Derry City courtesy of goals from Robbie Benson and Pat Hoban.

The Lilywhites arrived at the Ryan McBride Brandywell Stadium, their first of two visits to the north west this weekend, with only a single change to the starting lineup. Paul Doyle, who netted a deflected goal in last weekend’s home win over Bohemians, started in place of Joe Adams.

Ruaidhri Higgins similarly made a single change to his initial eleven as Cameron McJannet replaced Danny Lafferty in the left back berth as the Candystripes looked to get their title challenge back on track following a defeat to rivals Shamrock Rovers and a draw against St Patrick’s Athletic in recent weeks.

On a perfect evening for football, the large home crowd were stunned into silence with 10 minutes on the clock. Robbie Benson swivelled on the edge of the Derry City penalty area and fired an unstoppable effort into the top corner of Brian Maher’s net- his second goal of the season in the space of a week.

The search for an equaliser began in earnest with Joe Thomson and Jamie McGonigle to the fore in this quest. Scottish midfielder Thompson the first to test Dundalk netminder Nathan Shepperd as his scuffed effort from a Ronan Boyce cross was shovelled around the post. The former Dunfermline Athletic player, who netted in the first meeting between the sides on the opening night of the season, had another chance later in the half as a flying overhead kick stung the palms of Welsh stopper Shepperd.

In a reversal of last week’s fortunes where they trailed Bohemians at the break, Dundalk took their lead into half time and the second period saw a change with less than an hour on the clock. Last week’s difference maker, and ex Derry City schemer, Keith Ward joined the fray to replace Dan Kelly. The winger had been the focus for most of Dundalk’s attacks in the first half, however he received very little change from the impressive Ronan Boyce in the right back berth.

With Kelly departing the action, it wasn’t much longer before Boyce himself saw his number raised on the touchline by fourth official Ben Connolly with James Akintunde taking his place- albeit operating in a more advanced position on the right flank. Akintunde had been a thorn in Dundalk’s side at Oriel Park in the previous encounter between the sides and, once again, the Englishman would prove to have a say in proceedings.

Attempting to use his pace to break into the Dundalk penalty area, he was dragged to the ground by Darragh Leahy and earned a free kick which both Brandon Kavanagh and Will Patching sized up. In the end, it was the former Bray Wanderers winger Kavanagh who lofted a measured cross which was dispatched to the net by Akintunde- an equaliser less than ten minutes after joining the action for his third league goal of the season.

His previous two goals had both arrived in April games which finished two goals to one- a last gasp away victory over Bohemians and a defeat to Shelbourne at the Ryan McBride Brandywell Stadium. Buoyed by the leveller, the passionate home crowd roared on their side in the hope of continuing Akintunde’s trend in favour of their side and the Foylesiders had the balance of play in the second half without failing to unduly trouble Shepperd.

Their inability to convert possession into chances was punished when substitute John Martin forced the Derry defence into a mistake in their right back berth and the ball broke to Pat Hoban who twisted and fired a low shot beyond Maher to send the pocket of away fans in the far stand into raptures- their side on course for their first away win of the season with less than ten minutes remaining on the clock. However, the focus of the celebrations was on Stephen O’Donnell who received a second yellow card from referee Rob Harvey in the aftermath of the goal.

The unsavoury scenes meant a short delay to proceedings and a subsequent six minutes of injury time as Derry City sought an equaliser. It almost came too- Will Patching’s free kick cracked off the crossbar deep into the added time and, as the ball spun away into the crisp night sky, the home fans put their hands to their heads for a final time on an ultimately frustrating evening which saw their lead in second place now cut to four points having played an extra game than their visitors.

Their past three games have seen Derry pick up a single point and they now trail Shamrock Rovers by seven points as they travel to the Showgrounds to face Sligo Rovers on Monday night. Meanwhile Dundalk, with seven points from the same period in time are back in the north west on Monday night as they seek three points from a Finn Park encounter with Finn Harps.