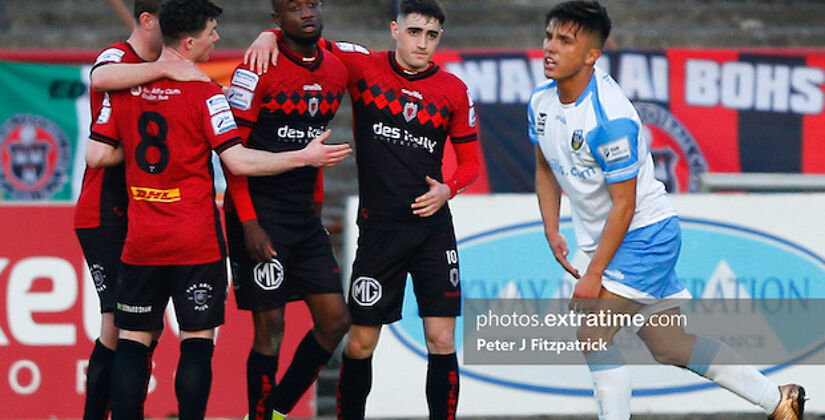 Bohemians moved to within three points of the Premier Division’s top-three after a strong second half performance helped them see off a stubborn UCD side 3-0 at Dalymount Park.

Junior Ogedi-Uzokwe was the star of the show and he opened the scoring before half-time with a Dawson Devoy penalty and Promise Omochere strike in the second half making sure of the result.

UCD will rue missed chances in either half, particularly with Bohs stopper James Talbot pulling off a fabulous double save with the game at 1-0 but the Students remain winless and bottom.

After an inconsistent start to the season, Bohs boss Keith Long freshened things up making three changes from the Dublin Derby defeat to Shamrock Rovers with Sam Packham, Jordan Doherty and Omochere coming into the starting XI with the latter partnering Ogedi-Uzokwe up front in a 4-4-2 formation.

UCD arrived with their tails also between their legs after a chastening 7-1 defeat at the Brandywell to table-toppers Derry City.

Sean Brennan and John Ryan were drafted into the Students XI for Luke Boore and Mark Dignam.

Junior was certainly the standout player for the hosts on the night and he went close on two occasions before he finally rattled the net before half-time pouncing on a Lorcan Healy fumble.

Earlier in the half, Healy did really well to close him down after Conor Levingston’s delicate chip left him one-on-one with the student stopper. Junior then slashed an effort wide after turning and shooting from a narrow angle.

Basement club UCD weren’t without their moments in the opening half and frustrated both Bohs and the Dalymount crowd for large periods while also flexing their attacking muscles on occasion.

Andy Myler’s side might have opened the scoring through Dylan Duffy, but James Talbot got down low to hold the ball.

Ten minutes later the left-winger tried his luck again but couldn’t curl his effort on target before Sam Todd ought to have hit the target with a free header on the stroke of half time as Bohemians were almost caught napping again moments after opening the scoring through a Ogedi-Uzokwe tap in.

Long switched Omochere and Liam Burt’s positions and Scotsman Burt in his new location alongside Ogedi-Uzokwe almost doubled the Gypsies lead seven minutes after the interval but his shot across goal went narrowly wide after a blistering run through the UCD midfield.

Bohemians showed a vulnerability in letting Shamrock Rovers in behind them last week and UCD similarly exploited that and should have been level on the hour but Talbot produced a stunning double save to deny Colm Whelan initially and then Donal Higgins on the follow up.

The destiny of the points hinged on a tale of two chances as moments later the visitors were punished as Ray Matthews controversially awarded Bohemians a penalty after Sam Todd was adjudged to have mistimed a challenge on Junior in the area. Despite vigorous protests from the Belfield side, the decision stood and Devoy slotted away his fourth goal of the season.

Omochere wrapped up the points for the Phibsborough side with just over 20 minutes to play getting on the end of Ali Coote’s through ball to sweep home his side’s third.

Having drawn against the league’s bottom four in the opening series of fixtures before that bizarre 2-2 draw at home to nine-man Finn Harps, Bohemians have picked up maximum points from Shelbourne and UCD in the meantime.

Next up for the Gypsies is a trip to north to face league leaders Derry City while UCD welcome Dundalk to the Bowl.