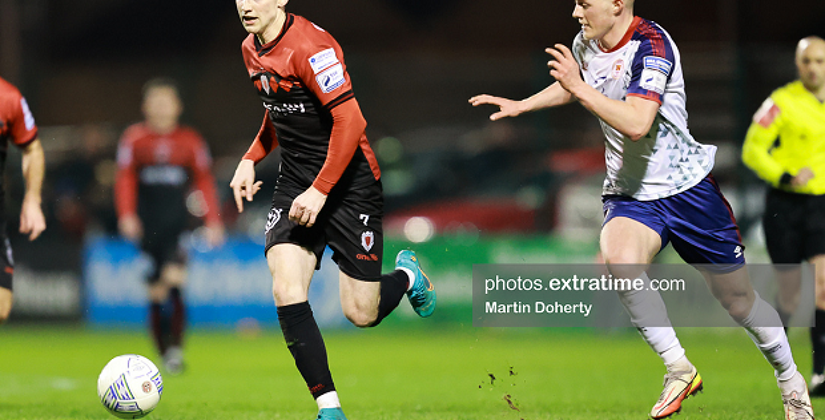 A Stephen Mallon strike early in the second half proved decisive to give Bohemians their first victory of the season over St Patrick’s Athletic at Dalymount Park on Monday night.

St Pat’s enjoyed early spells of possession and almost took the lead in the second minute. After a long ball forward, Eoin Doyle’ effort was blocked before Tunde Owolabi tucked away the rebound. It was ruled offside and was to be St Pat’s only real attack for the next hour or so.

Minutes later, Anto Breslin came up against the fleet-footed Twardek, who did several step-overs before hitting a shot low across the face of goal.

Promise Omochere began to cause the St Pat’s defense trouble. Playing with his back to goal, Omochere exchanged a one-two with Mallon who flashed an inviting ball across the box that no Bohs player was able to get on the end of.

A free kick by Bohs captain Tyreke Wilson was well saved by Joeseph Anang before a follow up header was well blocked by Breslin to keep the scores level.

Bohemians missed a great chance to take the lead on 31 minutes. An interception by Rory Feely was played forward quickly to Ali Coote. He slid in Omochere who squared to the onrushing Mallon. Mallon’s left-footed effort was saved brilliantly by Anang.

Twardek was causing havoc down the right-wing but his end product was lacking. St Pat’s came to life towards the end of the first half but impressive defending from Feely meant the Gypsies entered the break the stronger side.

The Saints came out in the second half looking to move the ball quicker but soon found themselves behind. Jack Scott failed to deal with a long ball forward and watched it drift over his head before Mallon nicked it. He steadied himself in the box before shooting past Anang to send the Jodi stand wild.

Darragh Burns replaced Owolabi just before the hour mark and did his best to put his side back in the game. Burns created chances by cutting inside from the left or pouncing on loose balls. His end-product however was missing and he was unable to get any of his shots on target.

As the game ticked approached the final whistle, Bohs survived a late onslaught from the visitors, with James Talbot imperious in the air. Mark Doyle and Eoin Doyle were poor throughout, and Billy King’s introduction did nothing to change matters.