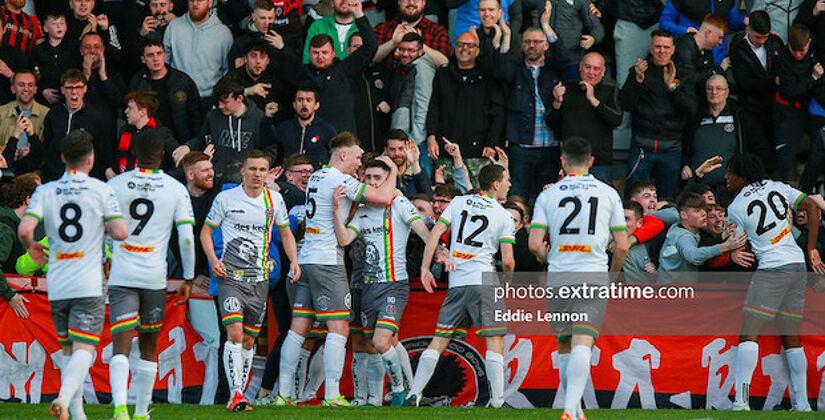 Bohemians leapfrogged Sligo Rovers into fifth place in the league table after they recorded a thoroughly deserved 2-1 win over the Bit O’ Red before a large attendance at Dalymount Park on Friday night.

In truth, the margin of victory should have been greater as the home side showed great attacking intent throughout the match and created multiple chances but were unable to add to their two-goal tally.

Sligo Rovers in contrast were quite solid at the back but seemed devoid of ideas up front and never caused much trouble for the home defence or goaleeper James Talbot.

The first real chance fell to centre back Ciaran Kelly who flashed a powerful header off the bar from a Jordan Flores corner in the 14th minute but there was nobody on hand to take advantage of the rebound.

The Gypsies continue to attack in waves but met great resistance from the Rovers’s defence. Right back Colm Horgan had his hands full with the threat of Omochere who operated on the left wing while Shane Blaney was excellent for the Bit O’ Red at the centre of defence where he dealt well with the threat posed by Junior.

Bohs lost Twardek through injury midway through the first half while they had another enforced change in the 31st minute when Sam Packman had to depart.

These early injuries seemed to disrupt the momentum for home team and the game became quite scrappy for the remainder of the first half with few chances created by either side.

Keith Long’s charges came out the more energised team after the break and they applied lots of pressure on the overworked Sligo Rovers defence.

The pressure finally told in the 61st minute when Dawson Devoy struck a great shot past Ed McGinty after drifting into the box unmarked.

Rovers manager Liam Buckley made a treble substitution with 15 minutes remaining in an effort to rescue the game, but in fact it was Bohs who scored the decisive next goal within a minute of those changes; Junior beating McGinty after being set up by Omochere.

The visitors did pull a goal back two minutes from time, an excellent left footed strike from substitute Adam McDonnell which flew past Talbot into the bottom corner of the net.

Rovers did pile on the pressure searching for an equaliser during the five minutes of injury time but it would have been undeserved and the home side held out and recorded their third home win of the season.

Bohemians will take great confidence from this performance when they travel to Richmond Park on Monday night to face St Patricks Athletic (who lost 2-1 on Friday at home to Shels) knowing that another win there will get them into the top four for the first time this season.

Sligo Rovers meanwhile do have the comfort of home venue for their Monday night clash with Derry City but they will need to be more potent in attack if they are to trouble the second placed team in the league.