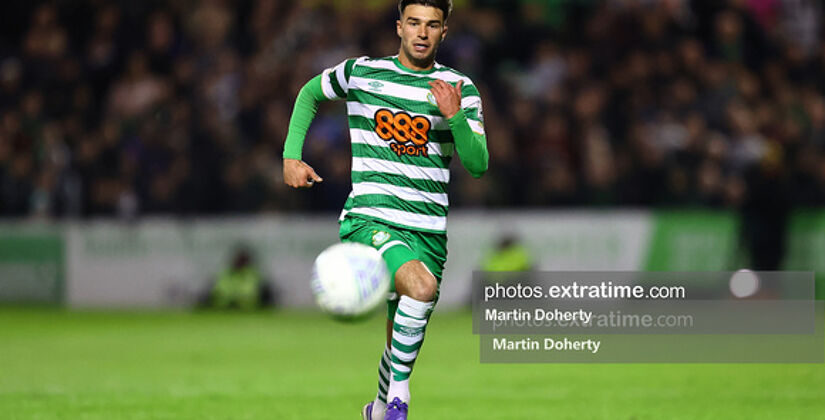 Shamrock Rovers kept up their pursuit of Derry City at the top of the Premier Division table with a 3-1 win over Bohemians at Dalymount Park on Friday night.

Strikes from Andy Lyons and Danny Mandriou as well as an own goal from ex-Hoop Max Murphy were enough to see off Keith Long’s side, despite Junior Ogedi-Uzokwe narrowing the deficit to a single goal for a brief period.

Stephen Bradley’s Shamrock Rovers travelled to Phibsborough on the back of a four match winning run, keeping three clean sheets along the way. On the other hand, their hosts had a turbulent Easter weekend, drawing with Finn Harps on Good Friday before putting four past Shelbourne on Easter Monday to record their second win in nine league games.

In a sold out Dalymount Park, it didn’t take long for the visitors to hit the front as Jack Byrne’s corner found its way to the feet of Andy Lyons and the former Bohs defender slammed the ball to the net for his fourth league goal of the season. Rovers 1-0 up within the opening five minutes.

Referee Neil Doyle dispatched four yellow cards in the space of the next half hour before the lead was doubled as Max Murphy poked a Jack Byrne cross beyond the reach of James Talbot at the back post to give the current league champions a 2-0 cushion at the break.

Bohs manager Keith Long made a triple substitution at half time with Sam Packham, Rory Feely and Promise Omochere replacing Horton, Murphy and Twardek. He was forced into a fourth change within five minutes of the resumption as Feely was unable to continue and needed lengthy treatment as Jordan Doherty joined the action.

Alan Mannus did well to deny Liam Burt early in the second half before Junior Ogedi-Uzokwe halved the deficit from close range on the rebound to leave a potentially exciting last 20 minutes for the northsiders to find an equaliser.

However, Stephen Bradley’s men had other ideas and Danny Mandriou netted his second goal in five days to take the lead back out to two and there it remained until the end, in front of almost 8,50 away supporters.

For Shamrock Rovers, it’s their fifth win on the bounce and keeps Derry City within striking distance, while Bohemians sit sixth in the league with two of their three league defeats this season coming at the hands of Shamrock Rovers.

Next weekend they host UCD at Dalymount Park while Shamrock Rovers travel to the Showgrounds to take on Sligo Rovers.