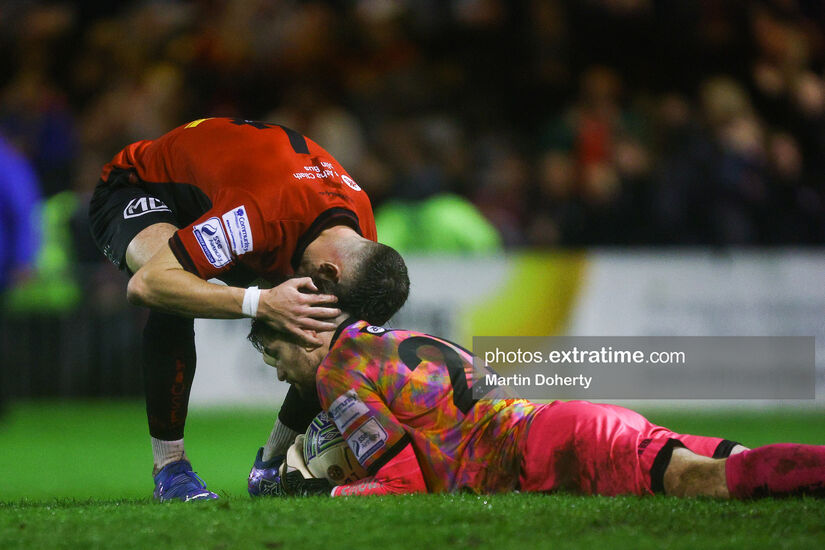 A late equaliser at Dalymount Park has heaped all the pressure on Finn Harps in the relegation battles as they played out a 2-2 draw with Bohemians on Friday night.

UCD’s victory over Drogheda United puts the Students two points ahead of Ollie Horgan’s men with a game at hand with the Donegal side having just two more games to play.

Ethon Varian put the home side in front in the second half only for Ethan Boyle and Filip Mihaljevic to put the visitors in front – it looked like they would hold out for a crucial three points, but Declan McDaid netted in the 90th minute to spoil what could have been a big night for Harps.

For his first game in charge Bohemians’ new boss Declan Devine opted for two changes to the side that lost to St Patrick’s Athletic last week, Jordan Doherty and James McManus dropped to the bench with Josh Kerr and Jordan Flores taking their place in the starting team.

Ollie Horgan went for three changes for the visit to Dublin with Ryan Rainey and Jaime Siaj starting on the bench and Elie-Gael N’Zeyi Kibonge being ruled out through injury - Rob Jones, Ethan Boyle and Filip Mihaljevic all started.

It was no surprise that the home side started out on top – Ethon Varian very nearly nipped in for a goal when Conor Tourish coughed up possession with a dreadful back pass in the opening minutes although that chance came to nothing.

Jordan Flores fired well over the crossbar in the eighth minute when Bohemians found it hard to penetrate the Harps defence although they almost had a gilt-edged chance five minutes later when Ethon Varian found himself in front of goal after a period of good pressure by the home side – Conor Tourish managed to intervene with a foot block to deny the striker, however.

Tourish made a key intervention in the 25th minute to keep the Gypsies from scoring when Kris Twardek found Conor Levingston with a cross at the back post, his floated header beat James McKeown, but his defender reacted quickly to clear the danger.

Levingston did have the ball in the back of the net in the 35th minute after some defensive hesitancy from Finn Harps as they failed to strip the ball off the home side, the assistant referee’s flag went up immediately for offside with no argument from Bohemians about the decision.

Harps had their first chance of the game in the 39th minute when a poor clearance found its way only as far as Barry McNamee on the edge of the box – the midfielder wasn’t expecting it and his shot was poor with the ball fired straight at Tadhg Ryan for an easy save.

Ryan was the hero once again two minutes later when Filip Mihaljevic won a penalty having been bundled over in the box by Rory Feely. It was the striker who took the spot kick, but Ryan guessed correctly and dived to the right denying the visitors an important goal.

Harps went close in the 52nd minute with Rob Jones sending the ball narrowly over the bar from distance – the home side responded immediately with Twardek heading a ball down for Varian – the striker flicked the ball toward goal but couldn’t keep it on target as it dribbled inches wide of the post.

James Clarke came close to breaking the deadlock three minutes later with some impressive skill on the edge of the Harps box, he took aim and stroked a shot of his own on goal but again the home sid couldn’t find the target.

It had been coming for a long time with much of the traffic going in the direction of Finn Harps’ goal and the home side finally got the ball over the line in the 63rd minute – a period of extended pressure by Bohemians saw Ethon Varian get to the ball before James McKeown to put the ball in the net when a low cross came in from the right flank.

There’s a certain never say die attitude about Ollie Horgan’s men and they certainly showed it tonight with the visitors equalising in the 76th minute. Barry McNamee floated a good ball in from a corner-kick and Ethan Boyle rose highest at the back post to nod it over the line.

And they were ahead just three minutes later after a crucial defensive error by the Bohs backline, Mihaljevic was able to slip in and win the ball, he placed the ball into the net with the Harps players piling on each other behind the goal in celebration.

The visitors couldn’t hold on to that lead however, Declan McDaid pounced on an error by McKeown to roll the ball into the net when the goalkeeper miskicked a clearance allowing the midfielder to run onto the ball and score unopposed – a goal that could wind up costing Harps their Premier Division status.