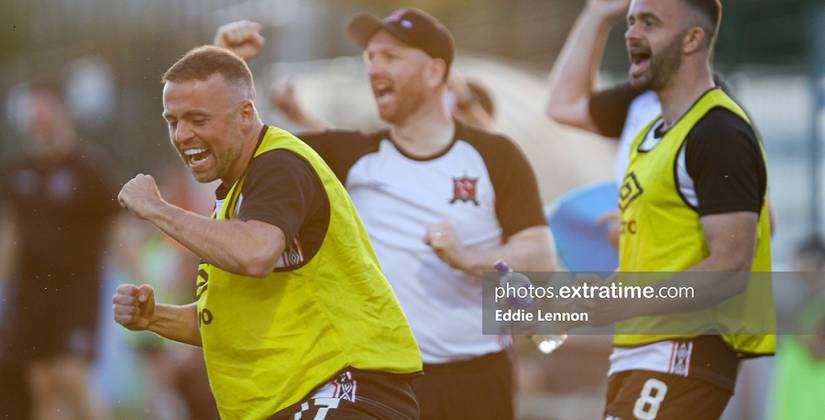 Dundalk cut the gap at the top of the Premier Division to just four points with a 1-0 victory over Bohemians at Dalymount Park on Friday night.

John Martin came off the bench to score the only goal of the game to give Stephen O’Donnell’s side the three points in a hard fought contest.

Keith Long made two changes to his side from their 2-1 loss to Sligo Rovers last weekend, Ethon Varian and Union Berlin loan signing Laurenz Dehl came into the starting team to make their first starts for the Gypsies in place of Liam Burt and Junior Ogedi-Uzokwe.

The visitors also made two changes after their 1-1 draw with Derry City, Alfie Lewis and Ryan O’Kane took the place of Paul Doyle and Daniel Kelly, with Lewis making his first start for the Lilywhites since he joined Stephen O’Donnell’s men in July.

The home side were on top in the opening minutes with Ciaran Kelly firing over the bar after the ball dinged around the box from a corner-kick. James Clarke very nearly played Ethon Varian in on goal in the sixth minute, but Dundalk’s Darragh Leahy got across quickly to block the striker’s effort.

O’Donnell’s men were dealt a huge blow in the 12th minute when captain Pat Hoban went down injured, the forward was forced to hobble off the field with John Martin entering the game in his place.

Some good play by Steven Bradley in the 22nd minute nearly had the visitors in for an opening goal, he got the ball to Ryan O’Kane who threaded it into the path of Martin, but a Bohs defender just got there in time to flick the ball from danger.

The Lilywhites were in again in the 28th minute when Greg Sloggett played a good ball into Bradley, the midfielder took the ball on before rattling off a shot in a crowded box with the defence just managing to deflect the ball behind.

Leahy nearly nicked a goal on the half hour mark when Tadhg Ryan failed to claim what looked like an easy ball in his box, the defender followed through, but the goalkeeper had enough about him to deny the visitors.

The best chance of the first half came in the 38th minute when Sam Bone found Ryan O’Kane’s feet in the Bohs’ box from his own half, the midfielder held the ball up well before setting Martin up for another crack, but Ryan made a great save at point blank range.

Despite that being the key chance, the visitors still took the lead just before half-time in somewhat bizarre fashion. Leahy sent a searching ball into the box and again it looked like Tadhg Ryan would claim the ball, whatever way John Martin challenged the Bohs shot stopper he managed to get some contact on the ball and send it bobbling into the net.

The home side called for a foul on the goalkeeper, but their protests fell on deaf ears with referee Adriano Reale waving them away.