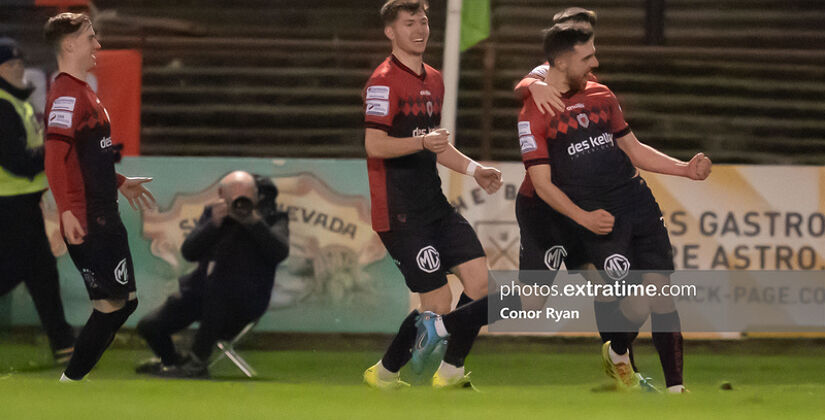 Bohemians and Dundalk played out an entertaining draw in Phibsboro on Friday evening. Bohs twice went ahead but were pegged back each time by their Louth rivals.

Former Dundalk midfielder Jordan Flores had put the home side in front before Patrick Hoban levelled instantly. Promise Omochere put the north-siders ahead once more but Steven Bradley made it two in two to give the sides the share of the spoils.

The streets around Dalymount Park hummed in anticipation with Bohemians playing their first game of the season after last weekend’s opener in Sligo was cancelled due to the adverse weather.

The crowd roared on a much-changed side from last season, club captain Keith Buckley left, along with fans favourites Ross Tierney and Georgie Kelly also opting for pastures new.

It was Buckley’s replacement in midfield who opened the scoring in the 28th minute. Ali Coote whipped in the most delicious of front post corners only for Dundalk to clear for another one.

An identical delivery once more from the Scotsman, and this time Flores was on hand to head home from close range.

Dalymount rocked but was brought back to earth with a bang after Dundalk skipper Hoban headed home from a Dan Williams corner just 90 seconds after going behind.

After a deadlocked opening thirty, the game was brought to life with the opening goals. Kris Twardek was making his return to Bohs after a spell with Jagiellonia Bialystok in Poland and was well received by the home crowd, terrorised Lewis Macari in the first-half.

However, it was Dundalk who nearly got the second, Daniel Kelly sprung the offside trap and found himself one on with James Talbot. The angle tightened, and Talbot saved, deflecting it around the post.

As the time ticked towards the half-time break, the Lilywhites had a massive shout for a penalty. Tyreke Wilson went down under pressure from Steven Bradley after a Hoban flick on, the Bohs club captain appeared to have handled it as he was on the deck, but referee Paul McLaughlin waved away protests.

Almost instantly, Bohs went up the other end and scored. Coote played a great ball down the right after getting halved by Macari. Twardek exploited the space in behind the left back and crossed towards Omochere who ran beyond the near post and flicked the ball excellently into the far corner.

Ten minutes into the second half and Dundalk were level once more. Kelly now on the left crossed to the far post and Bradley towered over Wilson and powered his header in off the post.

The home side had shouts waved away for a penalty after Stephen Mallon went down under a clumsy Sam Bone challenge.

Mallon who had an injury ladened spell last season started on the left for Keith Long’s side, combined well in the front three alongside Omochere and Twardek.

David McMillan, who replaced the injured Hoban, controlled a raking long ball in behind the defence and struck an effort from point blank range which Talbot did well to block.

Bradley had grown into the game after equalising, he went inside and out and hammered a left footed effort towards goal which Talbot parried.

Dundalk were slightly in the ascendency, Keith Ward who was also returning to old pastures, whistled a free kick just past Talbot’s post with 13 minutes to go.

The home side huffed and puffed, with Twardek being the most likely way they were going to find a winner but did little to test Shepperd in the Dundalk goal.

In the end nobody found the winner, 35 games to go.