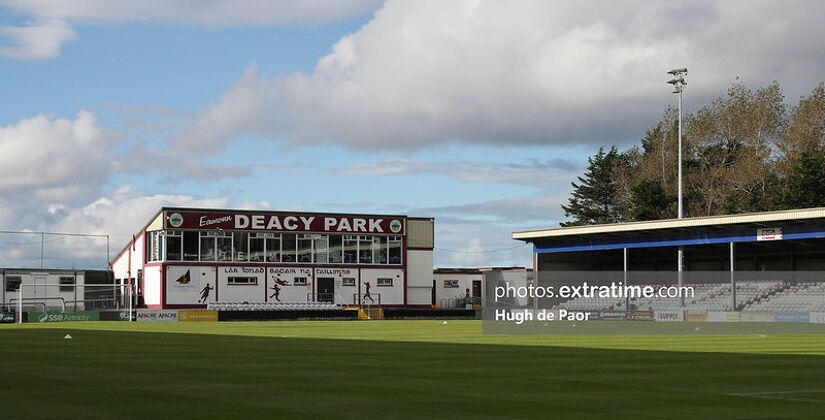 The Tribesmen will be looking to leapfrog Cork City when they host Wexford at Eamonn Deacy Park on Friday night (kick-off 7.45pm).

That of course all depends on how the Rebels fare against Athlone Town when they host the Midlanders in Turners Cross.

Galway have recovered well since a disappointing loss to Longford Town in June, they’ve since won three of their last four games.

The only game they didn’t win was a well earned point down in Turners Cross against Cork, a game during which they were reduced to ten men.

Like their opponents on Friday, they have been able to turn their attention away from First Division action with an FAI Cup tie against Bluebell United last Sunday, a game they won 7-0 to progress to the next round of the competition.

The opposition were understandably weaker than what they would normally face week to week, but manager John Caulfield will have been happy to see his side so ruthless in front of goal with David Hurley, Rob Manley and David Tarmey getting on the scoresheet and Stephen Walsh and Francely Lomboto scoring braces.

“Ian (Ryan) has built a very strong squad, they are in and around the playoff positions, so we know how difficult it will be.

“We are on a good run of form ourselves, but we know we have to be at our best to win the game.”

There have been at least two departures from John Caulfield’s squad confirmed recently with Shane Doherty departing the club for the second time, Mark Russell has also left and signed for Portadown having just arrived at Deacy Park weeks ago.

Wexford will have their tails up somewhat after their exploits in the FAI Cup last weekend when they dumped Sligo Rovers, fresh off a famous European victory over Motherwell, out of the competition.

Rovers took the lead from the penalty spot when Aidan Keena scored in the 53rd minute but Dinny Corcoran scored ten minutes from time to secure extra-time, Ger Shortt netted with five minutes to go to send Wexford through to the last 16 of the competition.

But attention turns to the First Division once again, and Wexford still have a lot of work to do if they want to be in contention for promotion come the end of the season.

They have been in great form in recent weeks, they may have lost to Cork two weeks ago, but they had been on a five game winning streak leading into that game.

Those performances deservedly have the side battling for a playoff spot, although they are still three points behind Treaty United in sixth place, that means they will be gunning to take another big scalp on Friday night.

Mitchell Byrne misses out on Friday’s game through suspension, but Wexford will also have to make do with their main management team with both Ian Ryan and Lorcan Fitzgerald both banned from the touchline for this fixture.

Wexford have lost just one of their last nine games in all competitions.

Galway United were last beaten by Wexford on Friday, 14 October 2016 at Ferrycarrig Park in a bizarre game that finished 5-4. Youths took a five goal lead in the game before Galway got back to within a goal.

The Tribesmen could go two points clear at the top of the First Division table if they can beat Wexford and if Cork City lose to Athlone Town on Friday night.