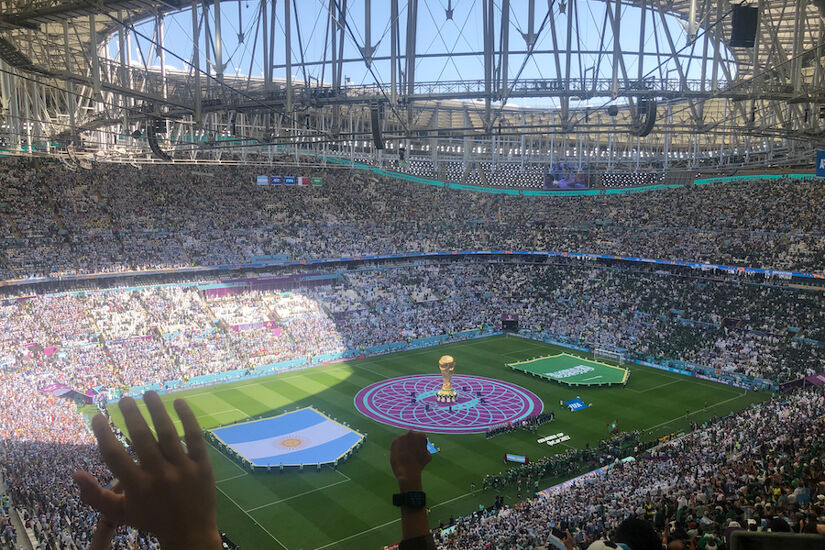 After the heavy defeats for Qatar and Iran in the opening couple of days, this was a case on Tuesday of turning up at the Lusail Stadium to watch Messi and Co. pick apart Saudi Arabia or so I thought.

With a supporters ticket I had purchased months ago (ahead of getting press accreditation for extratime.com), I went along to this one to sit amongst the huge travelling Argentinian supporters, enjoy watching Messi play and see his team win. Well that script was well and truly ripped up.

Argentina have brought one of the largest travelling contingents to the tournament – and their support was bolstered by a large number of local fans cheering on Argentina.

There is no party like an Argentinian arm waving party but there were huge swathes of vocal Saudi green clad supporters all around the venue – the stadium that will host the final on December 18th.

It made it more like a home crowd – but it was all very different an atmosphere than the opening night when Qatar were well beaten and the stadium emptied well before the final whistle.

There were fans that left early from this game but they were the hundreds of Mexico fans who were taking in this game before heading to see their team play out a scoreless draw in Stadium 974 against Poland later in the evening.

Space and time seemed to be warped by FIFA in these venues. The space is Tardis like as today’s venue has a capacity listing of 80,000 but 88,012 were in attendance. The time warp is the additional time – eight minutes in the first half and incredible 14 minutes in the second.

FIFA have issued an updated stadium capacity listing with all the venues getting at least an additional 10% on top of their listed capacity.

Pierluigi Collina, the chairman of the FIFA Referees Committee, said at a press briefing extratime.com attended last Friday that he expected there to be at least seven or eight minutes of injury time as officials look to take into account time wasting.

There were some empty seats around me in the top tier in the corner high above the corner flag - €125 was the cost of my ticket.

I’m sure the guy sitting beside me spent the same amount of money on his ticket but he spent most of the game on Facetime keeping his family up to date on the multiple Argentina goals that kept getting ruled out.

I’m not complaining about my (electronic) ticket – which I had great trouble getting to load up on the FIFA ticketing app before getting into the ground – but I’d have loved to be a bit nearer the action or maybe just nearer to Hervé Renard.

He must be one the suavist looking managers in world football. Despite the heat he looked immaculate in his white shirt with not a hair out of place.

In the current phase of Leo Messi’s career, there is an economy of movement to his play or should I say economy of non-movement as he really does just stroll around the centre circle when his team is not in possession, bursting into life only when he sees the right opportunity arise.

A game we will be talking about for a long time pic.twitter.com/dVYjkq43UN

It all started so well for Messi. The Argentinian skipper scored from a VAR appointed penalty after just ten minutes. However, VAR was not to be Argentina’s friend as three goals were chalked off by a combination of the offside flag or offside ruling via VAR.

At half-time the talk was could Saudi keep the score down but then there was crazy four minutes early in the second half.

Saleh Al-Shehri’s surprising equaliser in the 49th minute was a delight but when Salem Al Dawsari swept in a second soon after it nearly lifted the lid of the stadium shaped like an Arabic lantern.

Al-Shehri celebrated with a somersault while some of his teammates dropped to their knees in prayer. Argentina looked to Angel Di Maria to get them back in the game but he was ineffectual, as was Lautaro Martinez.

As I wasn’t working at this game, I was wearing my green and white hooped Shamrock Rovers jersey so I was wearing the right colour for where I was sitting. The surrounding Saudi fans welcomed me into their group. It helped that I knew the words to their celebratory song – Olé Olé Olé rang out right around the stadium..

Lionel Scaloni’s side didn’t quite panic but the Saudi’s were resolute in their defence and killed the game when they could – picking up six second half bookings on the way. They only had 31% of possession but La Albiceleste were wasteful with the ball and couldn’t beat the low block.

The Slovenian referee Slavko Vincic gave them plenty of time to try and find that equaliser but they just couldn’t beat Alowais Mohammed who kept them at bay in the second half.

When the final whistle did eventually come, the Argentinian supporters around me just had an anguished look on their faces. They couldn’t quite believe what they had seen and frankly neither could I.

We had witnessed World Cup history.