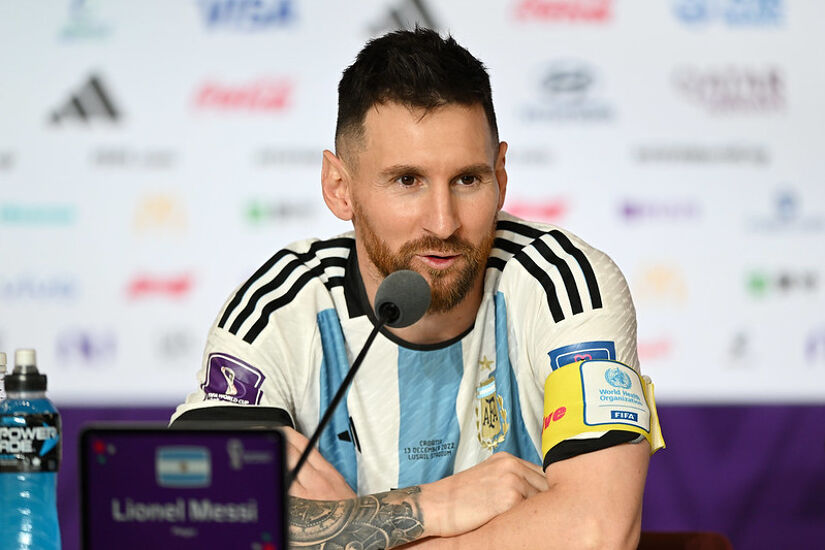 Argentina bridged a gap of 36 years to finally claim their third World Cup success in a game that was burst into life in the last ten minutes. They were two goals up via first half goals from Lionel Messi and Angel Di Maria before France dragged themselves level scoring twice in two minutes late on.

Messi had them back in front before being it was surrendered with Kylian Mbappe scoring a penalty two minutes from the end of extra-time. It was Gonzalo Montiel who was the man who landed the winning penalty in the resulting shoot-out.

It was bitter disappointment for the French. They were second best for most of the game before a dramatic two goal burst from Kylian Mbappe. He was the man who also got the leveller in extra-time for a final hat-trick. They were just unable to keep their nerves in the resulting shoot-out. They were so close to being the first side to win back to back crowns in 60 years.

Lionel Scaloni made just one change from the 3-0 win over Croatia in the semi-final. Angel Di Maria came in for Leandro Paredes despite having his own injuries in the tournament. Lionel Messi was the only remaining member of the 2014 side who lost to Germany and he captained the side.

France had issues with illness and injury during the week. Affected members like Raphael Varane, Dayot Upamecano and Adrien Rabiot all started.

France as champions were slow to get going in the early stages. Antoine Greizmann was culpable of giving away possession just outside his own area to allow Alexis McAllister a shot. Hugo Lloris was behind it though. Lloris then received a blow from his club team-mate Cristian Romero. He was able to recover after some treatment.

Theo Hernandez then gave the ball away to Rodrigo De Paul who helped set up a shooting chance for Angel Di Maria. It was well over though.

This nervousness led to the opening goal. Ousmane Dembele allowed Di Maria to get past him instead of standing his ground and tried to recover. The attempt saw the Argentine winger go over. It seemed to have been a minimal contact, but the penalty was awarded. Lionel Messi stepped up to confidently slot past Lloris. It was his fourth straight game in scoring.

France were unable to get their danger players into the game and were constantly stifled in possession. They did have a few half-chances from free kicks but were unable to really make anything of them.

Argentina went further ahead in deserved fashion. Again France coughed up the ball high up the field. A few quick passes between Romero and Messi tied up McAllister who burst down the right. He was able to keep his head up and spot the supporting figure of Di Maria. He played the ideal ball inside to the Juventus player who scooped the ball over the advancing Lloris.

Deschamps introduced two substitutes before half-time in a desperate attempt to get back into the game. Randal Kolo Muani was taken down for a free kick opportunity just before the break. No-one was able to get their head to Greizmann’s effort though.

It still appeared that the South Americans were going to score more rather than the French getting back into the game. Di Maria broke down the left to set up Di Paul for a volley at the back post. It was straight at Lloris though. He also had to come out to collect the ball before McAllister was able to get to it.

Di Maria then almost created an opportunity for Messi as he beat his opponent out wide. Rabiot was just able to get his foot to it before Messi made it three.

On the rare opportunity that France did manage to create an opportunity, they were unable to make much of it. Kolo Muani emerged unmarked from a corner but it came off his shoulder to go over. Kylian Mbappe had a shot from outside the area after the ball came to him. It drifted just over.

As the clock ticked away, France suddenly found a lifeline. Kolo Muani got behind the back of Nicolas Otamendi who pulled him back in the penalty area. Mbappe stepped up to slot it past Emiliano Martinez. It was their first shot on target remarkably.

Amazingly France drew themselves level almost immediately. Kingsley Coman won the ball from Messi in midfield before working a neat one-two with Mbappe who swept a superb volley into the bottom corner for an incredible equaliser.

France were coming forward relentlessly and had chances to go in front. Kolo Muane put his header just over before Marcus Thuram was booked for going over too easily in the box. Messi almost wrote the ideal moment but his superb strike after cutting inside was bound for the net only for Lloris to tip it over.

The first period of extra-time was pretty flat as both sides tried to come to term with the events of the previous ten minutes. Argentina almost got themselves back in front only for brave French defending. Lautaro Martinez was found in space by Messi only for Dayot Upamecano to block his initial effort and Raphael Varane on the follow-up. Upamecano was at it again moments later to deny Martinez yet again.

No heroics was able to deny Messi at the start of the second period. Argentina worked the ball down the right to set Martinez clear on goal. His initial effort was saved by Lloris but came back out to Messi. He followed up to tap it home despite the best efforts of Upamecano on the line. It had been initially flagged as offside by the lineman, but it was shown Martinez was played onside.

Incredibly France came back again. A shot came in from Mbappe before it struck the arm of Gonzalo Montiel and another penalty was awarded. Mbappe stepped up yet again to slot it past Martinez.

And so we went to penalties. Both Mbappe and Messi scored theirs, but crucially both Koman and Tchouameni were unable to net for France. Montiel was the man to finally secure the title as he beat Lloris.

An incredible end to what proved to be an incredible game. Both set of players slumped to the ground in shear exhaustion upon the final whistle. Huge celebrations in the stands as the homecoming will no doubt be massive on the streets of Buenos Aries, Rosario, La Plata and Mendoza. Messi secured his place in footballing history.