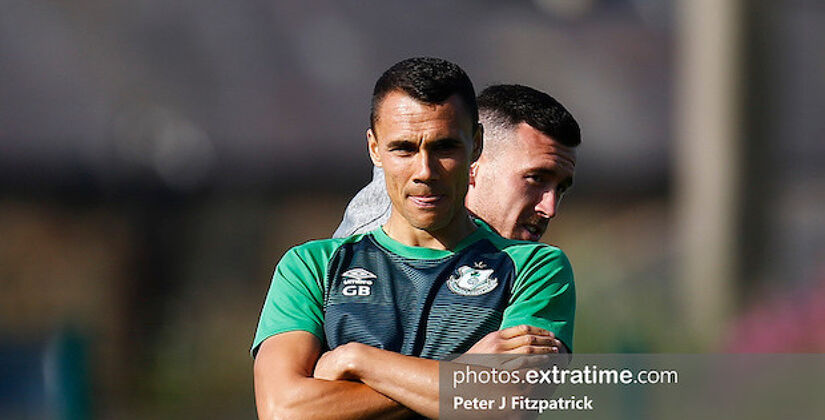 A remarkable come from behind 4-2 win for Shamrock Rovers over Derry City kept the Hoops top of the table.

The Candystripes led 2-0 on 31 minutes after goals from Ronan Boyce and Junior but a strike before half-time from Graham Burke got the Hoops back in the game. In second half Ronan Finn and subs Rory Gaffney and Richie Towell wrapped up the win.

Stephen Bradley made four changes from the team who beat Slovan Bratislava in Europe during the week.

They had trailed going into that second leg 2-0 and while they won the game 2-1 they were eliminated from the Champions League. This time around though they fully pressed their come back home to full advantage.

The Hoops forced an early save out of Nathan Gartside when Danny Mandroiu’s fine run ended with a shot on target on 11 minutes. However, it was the home side who made the breakthrough.

First up Ronan Boyce gave the Candystripes the lead. Pico Lopes’ attempted clearance from his own box was blocked down on 20 minutes allowing Will Fitzgerald to square for Boyce to beat Mannus.

Thirty minutes in, Alan Mannus pushed behind a Junior shot after he ran onto a Fitzgerald cushioned header. When the resulting corner was swung in by Jack Malone, referee Rob Hennessy pointed to the spot and handed Lopes a yellow card for an infringement.

Junior made no mistake from 12 yards to double the Derry lead but they couldn’t hold onto the two goal cushion for half time.

Four minutes from the break, Burke rifled home a left foot effort from outside the box for his ninth goal of the season – three days after he became Rovers’ all-time top goalscorer in Europe.

Hoops Head Coach Stephen Bradley made two changes at the break as he looked to get his team back into the game and the Hoops were sensational in the second half. Towell and Gaffney came on in place of Mandroiu and Lee Grace and both got on the scoresheet.

That attacking mindset paid off as just after the hour mark they had the lead. Ten minutes into the second period, Liam Scales run down the left rewarded Rovers as he squared for Finn to slot the ball home inside the six yard box.

On 62 minutes Gaffney and Burke exchanged a couple of passes before Gaffney ran onto Burke’s through ball. From an acute angle Gaffney slammed the ball by Gartside – for his seventh of the league campaign.

Towell made it four on 74 minutes as Burke’s pass played him through clean on goal and he made no mistake slotting it home for his first league goal for Rovers. The goal left the Candystripes reeling having had their two goal lead turned into a two goal deficit as the Hoops secured their sixth win in a row in Derry.

Last season, Derry had led 1-0 on 78 minutes only to concede two goals in three minutes and so they likely will be glad they won’t have to face the Hoops again at home in the league this season.