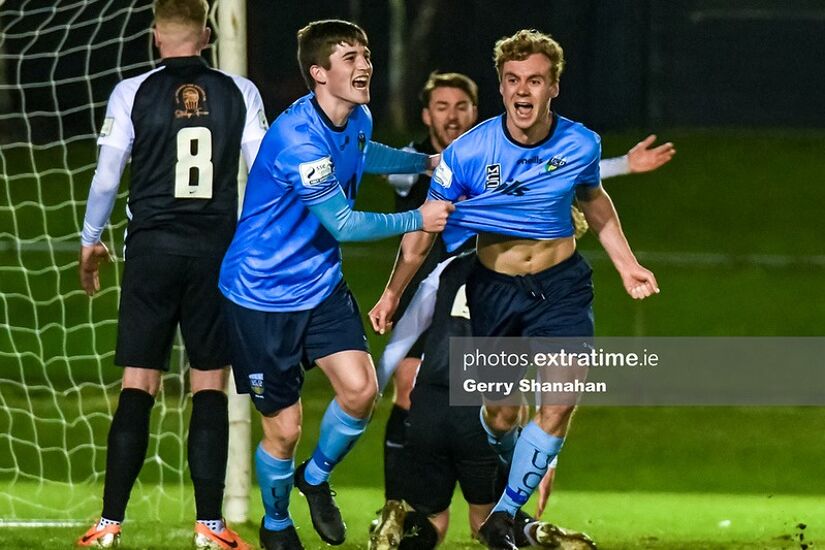 Athlone debutant Adam Wixted made it a night to remember for himself and his teammates with an injury time equaliser away to UCD.

Athlone were trailing heading into the final few seconds of the game before Wixted struck at the death.

UCD took the lead through the impressive Mark Dignam before Stephen Meaney levelled just before the break.

The Students then weathered a storm from the visitors to retake the lead in the 74th minute but it was not enough as Athlone grabbed a deserved draw at the death.

The Students handed starts to new arrivals Sam Todd and Sean Brennan, while fellow new arrival – from Athlone – Adam Lennon was left on the bench.

Athlone on the other hand – who made 17 signings during the off-season – gave competitive debuts to Kurtis Byrne, Jamie Hollywood and Michael Schlingermann.

And it was Adrian Carberry’s new-look side that started the game as the better side, and they ought to have taken the lead after less than 40 seconds of the game played.

Former St Patrick’s Athletic winger James Doona was found free on the left flank, before finding Stephen Meaney who was denied not once, but twice by Lorcan Healy in the UCD goal.

Healy was sprung into action moments later again, as he was forced to parry away the danger with Kurtis Byrne lurking at the back-post.

But Byrne’s best chance came four minutes later. The former Waterford forward latched onto a bouncing ball before seeing his shot crash off the crossbar.

However, for all their dominance, Athlone fell behind in the 22nd minute of the game thanks to a Mark Dignam opener.

Dignam latched onto a goalmouth scramble - after Liam Kerrigan saw his shot crash off the bar – to give the Students a somewhat fortuitous lead.

UCD then almost made it two minutes later – with Schlingermann fumbling an Evan Weir free-kick into the feet of Kerrigan.

However, with the goal at his mercy, the former Sligo Rovers winger saw his shot saved by Athlone’s netminder, despite the apparent lack of awareness from Schlingermann at the time.

After a rocky couple of minutes, Athlone went close again – with Healy producing a top-class save from Byrne.

Byrne blocked a Jack Keaney clearance – and the ball then unwittingly arrowed itself towards the top-corner, but Healy somehow produced a highlight-reel save.

Healy’s luck would however run out in the 39th minute as Stephen Meaney levelled for the visitors with a glancing header.

The former Drogheda full-back got on the end of Aidan Friel’s cross and made no mistake to give Athlone a deserved equaliser.

And it nearly got better for Athlone just before the break as Meaney almost profited on a defensive error from the hosts, but he could not convert in time.

Athlone continued their positive opening half performance into the early stages of the second period, but they were once again denied by the imperious Healy.

Firstly, Adam Wixted went close while one-on-one with the Students netminder, but Healy was able to parry clear.

Doona was the next to go close for the visitors, but he was also denied by UCD’s English-born keeper from close-range.

Sub Jack Watson then went close for the visitors – but his two efforts from long-range were never troubling the UCD defence.

Athlone’s wastefulness in front of goal was then punished in the 74th minute as UCD sub Dara Keane slotted home.

Keane was found by a through ball from Dignam – and he made no mistake in scoring for the Students.

The Kilkenny native went close again moments later – but his header could not find its way into the back of the net from Weir’s sumptuous set-piece.

Despite their general good play, Athlone were unable to muster up anything of real note in their search for an equaliser, up until the last few moments of the game.

The Blue and Black of the Midlands saw Wixted latch onto a long hopeful ball, where he would then find the back of the net from a tight angle.

The late leveller was a cruel blow to Healy in the UCD who produced a string of world-class saves throughout the game, despite Athlone also deserving it.

In truth, Athlone may have won the game on another night – not that it really matters now as both teams will now begin preparing for games against Galway and Cobh next weekend.