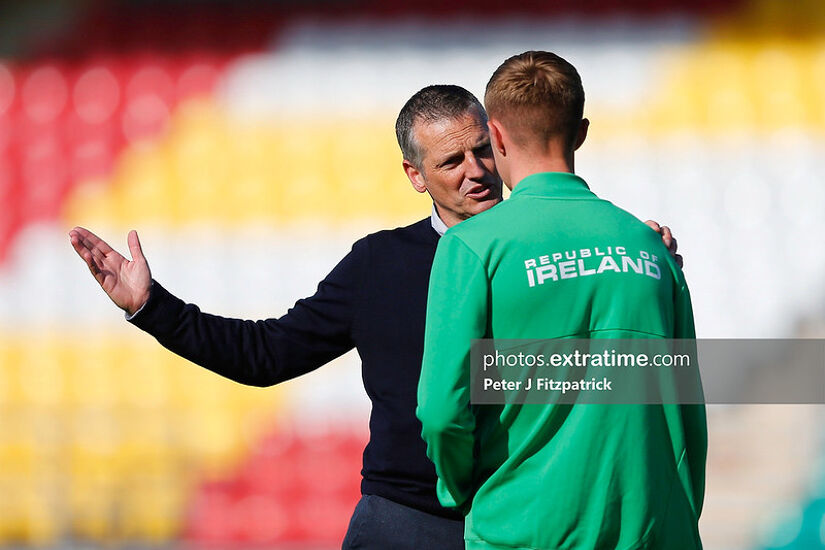 Jim Crawford has extended his stint as Republic of Ireland under-21 Head Coach having signed a contract extension with the FAI that will keep him in the role until the end of the 2025 European Under-21 Championship campaign.

The FAI also confirmed that Assistant Coaches Alan Reynolds and John O’Shea have agreed extensions with the FAI for the upcoming campaign.

The signings keep the management team together that brought Ireland to the play-offs for the first time rising in the UEFA rankings to 19th spot which is Ireland's highest ranking at that age grade.

"To be Head Coach of the Under-21s team is a huge privilege, so to renew my contract is something I'm very proud and excited about,” said Crawford.

"It gives me and my staff a further campaign to help develop the next generation of players and ready them for senior international football. This represents success for us with the view that development leads us to a European Championship."

In 2019, Jim joined Stephen Kenny’s U21s backroom team and was promoted to U21s Head Coach the following year when Kenny took up the role as manager with the senior men’s team.

FAI CEO Jonathan Hill, speaking about the contract extension, said "we are delighted to extend Jim's contract after an excellent Under-21 campaign where he and the team achieved so much. We are also very happy that we are able to extend Alan and John's positions with the Association and to keep the team together.

“We all shared the excitement of that run to the  play-offs and there were some memorable wins for Jim over Sweden, both home and away as well as generally excellent performances in Tallaght Stadium in front of a support that grew game-by-game.

“In Jim, we feel we have a talented and experienced Under-21s Head Coach who will continue to nurture the talents of our young players to reach senior international levels."

Collie O’Neill: ‘Shamrock Rovers are really backing it. Whatever the men have, the women are going to have. It’s not just a token because women’s football is doing well at the moment.’ https://t.co/9S0oBsE7wT pic.twitter.com/mDieRo7kOo