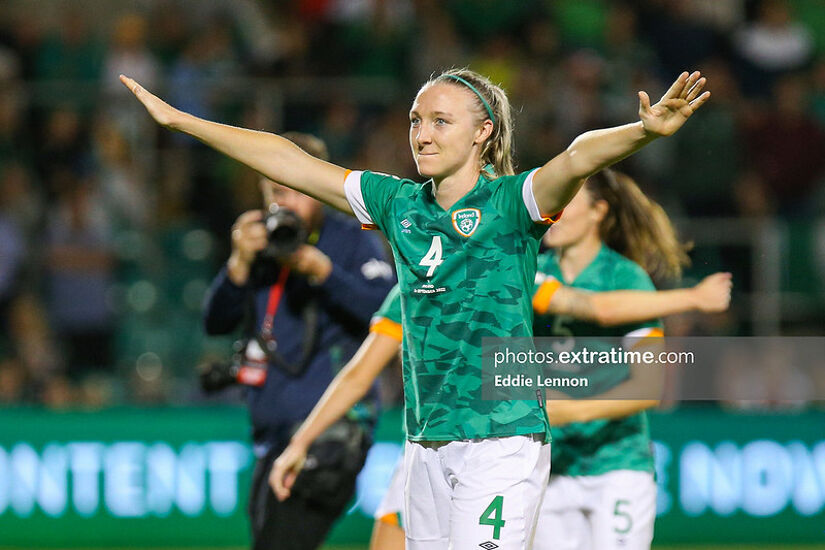 Republic of Ireland defender Louise Quinn admitted that this year’s World Cup Finals are never too far from her mind especially now the tournament is just six months away.

The 100 time caped international said that the Irish women’s football team can take inspiration from their counterparts in Irish hockey. The women’s hockey team finished runners up in the 2018 World Cup Final and qualified for the Olympics held in Tokyo in 2021.

Quinn was speaking on Wednesday at the Mnáwesome event celebrating the success of Irish women in Sport held in support of Women’s Aid. She was part of a panel including 2018 Hockey World Cup silver medallist Róisín Upton), former MMA champion fighter Aisling Daly and 2015 Special Olympics gold medalist Sarah Byrne.

“I’m thinking about it every day,” said Louise Quinn about the World Cup tournament in Australia and New Zealand in July. “It is a main thought in my head but you have to get on with everything. Being a footballer is 24/7. You have to make sure you are playing well at club level so you are fully ready for the next camp in February.”

Vera Pauw’s upcoming squad gathering is next month with a further training camp to come in April. The team will then gather in June ahead of the World Cup.

⭐️ A stellar line-up here on Wednesday for Mnáwesome – Celebrating The Success of Irish Sportswomen.

“From start of June we will be in long training camp,” said the 32-year-old Wicklow woman. “We will be training and playing in-house games including some against (Ireland international) boys teams. We will be together for two months which will be a challenge but luckily we get on!”

Quinn watched on from the stands in London in 2018 when the Irish women’s hockey team, including Róisín Upton, went on that amazing run all the way to the World Cup Final. She attended Ireland’s 1-0 group win over India in the Olympic hockey stadium.

“Our ambition is to match the Irish hockey team in competing at World Cups and we can take inspiration for them. We want to do what they have done and what they are doing for Ireland.”

Quinn’s Ireland football team fell at the last hurdle in their qualification for the most recent Euros – with a heartbreaking loss to Ukraine – and that provided them a focus for their next qualifying campaign for the 2023 World Cup.

“The loss to Ukraine was one where we were in a position we hadn’t been in before as a group. We didn’t know how to handle it. The lesson was dealing with the same type of game in this World Cup campaign.

“Ahead of the play-off (against Scotland) after the results earlier that day Vera Pauw said to us ‘ go win the game and get us directly to the World Cup’. We got the win and I want to enjoy every minute of this World Cup.”

Wednesday’s panel event was hosted by Aisling O’Reilly with proceeds going to Women’s Aid whose donation page is womensaid.ie/donate.

Bohemians appoint Pat Fenlon as Director of Football: 'It is a really exciting time to be getting back involved with Bohs' - https://t.co/94rjArr8tj https://t.co/nMdeCNIcc6