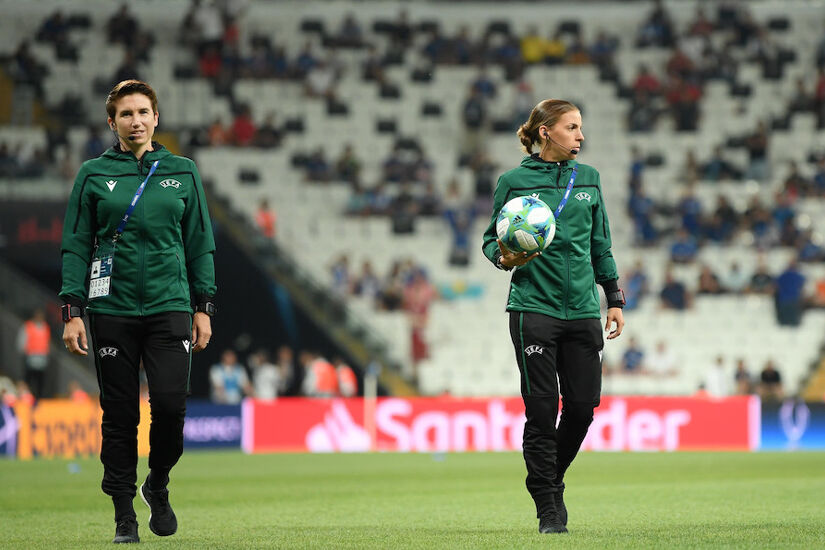 Michelle O'Neill (left) and referee Stephanie Frappart ahead of the UEFA Super Cup match between Liverpool and Chelsea in Istanbul in August 2019 Credit: Michael Regan/Getty Images

FIFA have announced their panel of 33 referees and 55 assistant referees for next summer’s FIFA Women’s World Cup. Among the match official’s named for the tournament in Australia and New Zealand is Irish woman Michelle O’Neill.

“As always, the criteria we have used is ‘quality first’ and the selected on-field match officials represent the highest level of refereeing worldwide,” said the chairman of the FIFA Referees Committee, Pierluigi Collina.

She was also part of an all-women’s refereeing team, led by France’s Stephanie Frappart who took charge of the 2019 UEFA Super Cup when Jurgen Klopp’s Liverpool side defeated Chelsea on penalties in Istanbul.

The Irish match official was assistant referee in the Women’s Champions League in 2022 where she officiated at the quarter-final fixture between Juventus and Lyon held in the Juventus Stadium in Turin.

The Wexford native worked with Welsh referee Cheryl Foster in that Champions League tie and Foster is one of the 33 UEFA referees listed for the World Cup, along with Stephanie Frappart.

Frappart made history late last year as she became the first woman to lead a refereeing team at the men’s World Cup.

For the Costa Rica and Germany game in the Al Bayt Stadium, she worked with assistant referees Karen Diaz and Neuza Back as part of the first all female match officials to take charge of a game at the FIFA World Cup game. Kathryn Nesbitt also acted as an assistant referee for the round-of-16 game between England and Senegal.

Diaz, Back and Nesbitt are all named as part of the list of 55 assistant referees.

Over the next two months the selected match officials will participate in preparatory seminars (in Doha and Montevideo), reviewing and analysing video clips of real match situations and taking part in practical training sessions with players, which will be filmed to enable participants to receive instant feedback from instructors.

Bastien Hery on his time playing under Alan Reynolds at Waterford: ‘In terms of the dressing room and the experience, it was definitely the best for me.” https://t.co/zR4lakPwtG pic.twitter.com/3ujpZsMtrH