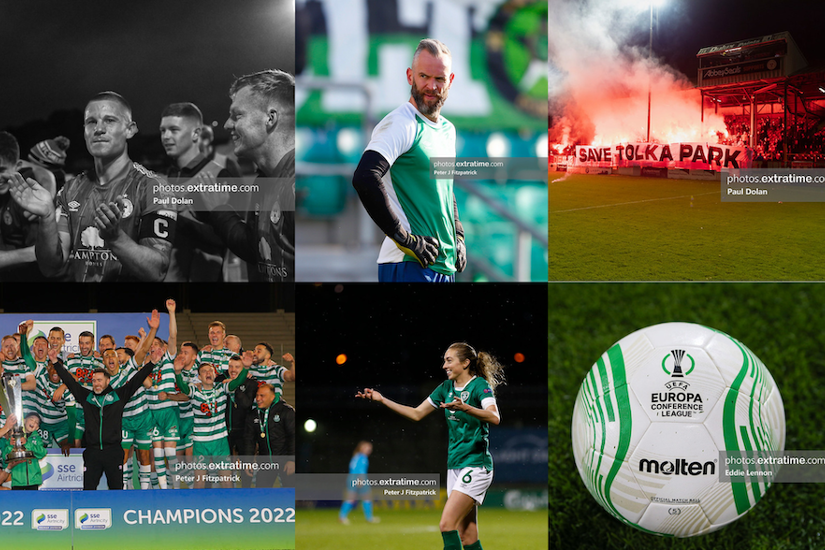 Having documented part one of our Top 20 most read stories on extratime.com in 2022, on Christmas Day we give you our top 10.

You’ll have seen the ‘Save Tolka Park’ banners in the stadium and the stickers on every second lamppost in Dublin and back in February that is what Shelbourne Football Club and their supporters took a big step towards.

Sean O’Connor detailed in this article how the Reds ended their proposed groundshare proposal with Bohemians at a redeveloped Dalymount Park and submitted a plan to Dublin City Council to purchase Tolka Park with the intention of redeveloping that ground on the banks of the Tolka river.

Interviewed for this article, Lee Daly of the ‘Save Tolka Park’ campaign said: ‘It's very early days, but we are very clear on what we want to happen. We want to see Tolka become a multi-purpose stadium to benefit the community.”

New piece up on @ExtratimeNews

"Turning left onto Richmond Road in Drumcondra, the first thing that catches your eye is a large black and white billboard. Three words have been the talk of the area for months, SAVE TOLKA PARK."@SaveTolkaParkhttps://t.co/h8cmlk81o3

Having made his 200th league appearance for Shamrock Rovers and matching the club record of 97 clean sheets in the league in October, Alan Mannus was profiled in this article by Macdara Ferris.

Speaking to the goalkeeper, his manager and team mates, this long read detailed just how important the 40-year-old goalkeeper has been to the Hoops in each of their title successes dating back to 2010 and how his game has developed over the years.

8. Gary Cronin: ‘I knew the merger was coming and that wasn’t for me. The right thing to do was move on'

In June Dan Lucey spoke with then Longford Town manager Gary Cronin. The former Drogheda United player spoke about why he decided to leave his managerial role with Bray Wanderers.

"When news of the merger came out there were a lot of extra things to deal with in the dressing room,” said Cronin. “It’s happened, that’s their business now and good luck to them. A lot of Bray supporters weren’t happy and that’s since come to the fore. We’ll see how it develops.

"Sometimes ventures like that take time and perhaps things have to get worse before they improve and hopefully, that’s the case. There was an opportunity to coach there, but that wasn’t for me.”

7. Will someone please think of the coefficient?

We sometimes give extratime.com owner Gareth Penrose a short break from coding the website he has run for over a decade to do some writing.

His seasonal attendance article is usually a main stay of our top 20 although this week the FAI got the good news attendance story out there.

Another good news story this season was the performance of the League of Ireland teams in Europe and with all the talk of the UEFA coefficient, Gareth wrote this detailed explainer about the process, how the LOI clubs have fared over the years and this season in particular.

I wrote about the exciting topic of coefficients which I know you are all eager to read and share with everyone you know. https://t.co/GqbT8nQNmI

6. Maxim Kouogun: 'I’ve got just short of 150 appearances under my belt so I’m looking forward to bringing that experience over to England and really kick on'

Transfer stories are the life blood of the website during the off-season and Maxim Kouogun’s move from Shelbourne to National League North side York City captured the imagination of our website visitors back at the start of 2022, a year which saw Kougun help York to promotion.

This reporter was as happy as any Irish person when Amber Barrett’s goal won the World Cup play-off against Scotland to ultimatly send the Girls in Green to the 2023 Women’s World Cup.

However, a part of me was just a little bit sad that I wouldn’t be able to continue to bore people about the convoluted play-off system I’d learned about for teams looking for a backdoor route to the tournament in Australia and New Zealand next July.

This article, written ahead of Ireland’s qualifier against Slovakia, detailed both the UEFA play-off route and the FIFA inter-continental play-off that were both then on Ireland’s radar.

Thankfully for Vera Pauw’s side wins over Slovakia and then Scotland, and results elsewhere, secured their spot at next summer’s tournament in the southern hemisphere.

An Ireland win in Slovakia and they will get a bye through the play-off semi-final and into the play-off finals.

Updated explainer on the play-off route to the 2023 World Cup Finals as results elsewhere go the way of the Girls in Green https://t.co/GE32OiNEXn pic.twitter.com/cdZkBPtOGU

4. Paul Doolin: 'A lot of us were pushed to the side and I don’t think we were trendy enough'

A chat with Paul Doolin on both his playing and managerial career just missed out on the top 3 of our list.

Speaking about the European Under-19 qualifiers with Ireland in 2011, Doolin recalled that “after reaching the elite phase after Bulgaria, we had a few friendlies, to look at different players, so there was a different squad going to the Euros from the one who started the campaign. Matt Doherty, John Egan and Jeff Hendrick were there, so we had good players, who performed well, but then were thoroughly beaten by Spain.”

In the build up to this year’s FAI Cup final, Rónán MacNamara spoke with Luke Byrne. The Shelbourne skipper was chatting in the week that the news broke that senior full-time professionals in Ireland will be entitled to a minimum weekly wage of €430.

Byrne welcomed the move but he feels more can be done and he spoke about his experience of leaving full-time football earlier in his career to become a part-time player on €100 a week.

Luke Byrne weighs in on the LOI minimum wage
Via @ExtratimeNews https://t.co/UZivS7RiBj

2. Tony Sheridan: 'I'm a Shelbourne man and still a fan. It was probably one of my biggest mistakes leaving Shelbourne'

Former @shelsfc midfield maestro @TonyShero_74 talks to @ExtratimeNews about leaving the club he loves just before they began to dominate the @LOIDOTIE Premier Division: https://t.co/4DlcbKsAmj

1. Stephen Bradley on decision to remain at Rovers and his future ambitions

It has been quite the year for Shamrock Rovers Hoops Head Coach Stephen Bradley. He came very close to leaving for Lincoln City in May. He spoke about his decision to stay with the Hoops in what was our most read article of the year.

Of course Bradley remained at Rovers to qualify his side for the Europa Conference League – where they drew two group games - and secured their third league title in a row.

He managed all this during a difficult personal period as his son Josh was undergoing treatment for leukaemia. The league trophy presentation involving father and son at the end of the season was a standout moment of the season.

“It was a really tough decision because Lincoln are a really progressive club in how they're doing things. On Thursday night I just sat down with the people around me, had a good chat, and I just felt this is where I need to be. I’m very comfortable with my decision.”

Heard from Stephen Bradley pitchside after @ShamrockRovers 3-1 win over Harps last night. He spoke about a tumultuous week in Tallaght and his future managerial ambitions. https://t.co/WxelgmzdWZ