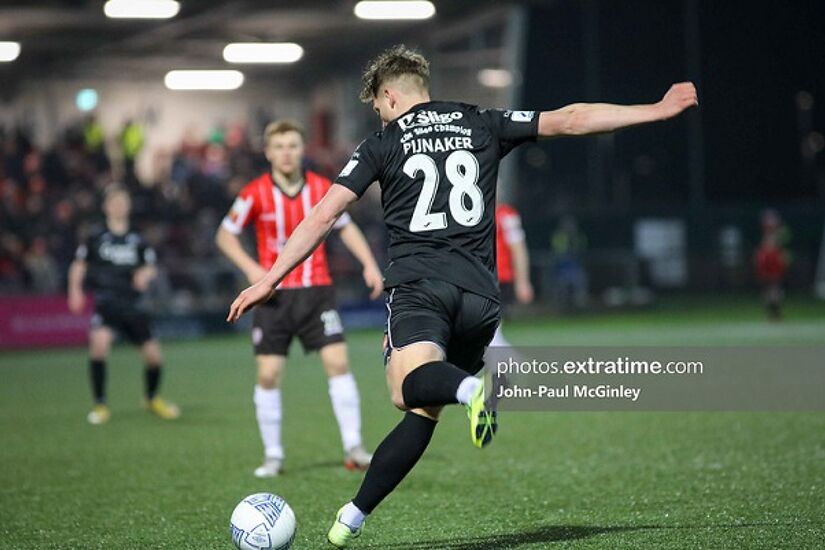 Sligo Rovers have continued their off-season recruitment drive with the permanent signing of defender Nando Pijnaker.

The defender was previously on loan at the Showgrounds from Portuguese side Rio Ave.

But after an impressive season with the Bit O’ Red, the central defender has made his stay at the club permanent.

He explained: “I am delighted to be back at The Showgrounds for next season.

Pijnaker spent 2022 on loan at The Showgrounds but makes the permanent switch for 2023.

“I have really enjoyed my time in Sligo so far and I was keen to come back here on a permanent basis.

“I wish to thank everyone at Rio Ave for helping me in my career and I am looking forward to my future here at the Showgrounds.”

Meanwhile, Cork City have snapped up forward Ethon Varian on loan from Bohemians for the season ahead.

The former Stoke City youngster spent the second half of the 2022 campaign at Bohs after leaving the Potters in June.

And he said: “I am really looking forward to playing in front of the fans as a Cork City player.

We are delighted to announce the signing of Ethon Varian!

“I grew up supporting the club, going to games with my friends, and I have some great memories at Turner’s Cross from when I was younger, watching the likes of Colin Healy play.”

Meanwhile, Waterford have confirmed the signing of midfielder Dean McMenamy from Shamrock Rovers.

The 20-year old spent the previous season on loan at Longford Town where he played 30 games for the then Gary Cronin managed side.

His former club Longford however have unveiled three new signings.

Oisin Hand joins De Town from Shamrock Rovers, while Gavin O’Brien links up with the club after a prior stint with Bohemians.

Longford Town FC is delighted to announce the signing of Evan Farrell to the club for the 2023 season!

Cole Omorehiomwan also makes the move to the Carlisle Grounds from Shamrock Rovers.

Green and White for

Jamie Callaghan re-signs for the Seagulls.

The 19-year-old defender joined the club in 2020 and made his first-team senior debut in June of this year. #Seagulls pic.twitter.com/S9tTZ5Dvit