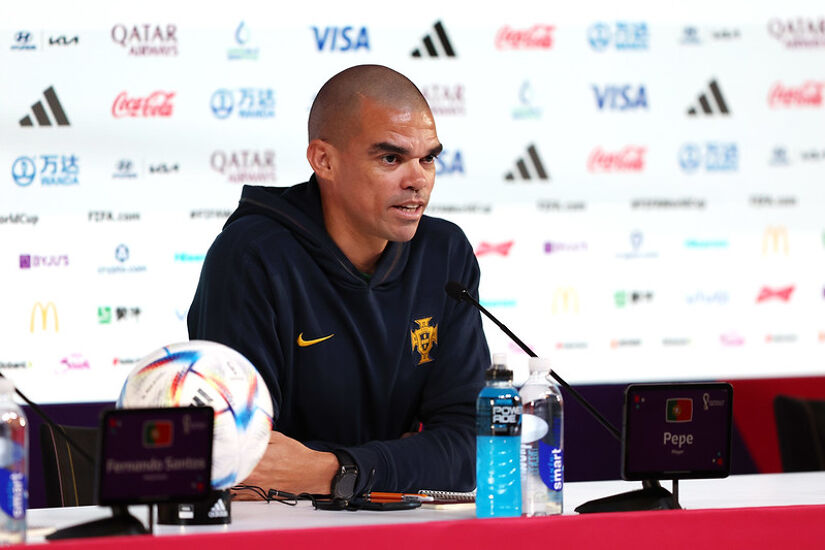 Portugal eased into a quarter-final meeting with Morocco after defeating a shellshocked Switzerland 6-1 on Tuesday evening.

A rather surprising omission from the Portugal starting XI was that of Cristiano Ronaldo, who had not been left out of a Portuguese starting line-up in a major tournament since their 2-0 win over Russia at EURO 2004.

It is unclear why Ronaldo was left on the bench, but he was one of eight changes made to the side that lost 2-1 to South Korea in the final group stage fixture – a group in which they won comfortably despite that surprising loss.

The Swiss made two changes to the side who defeated Serbia 3-2 last Friday, with a fit-again Yann Sommer returning between the goal posts, and Edimilson Fernandes replacing Silvan Widmer at right-back.

Portugal were the favourites going into this fixture, and it was evident from the get-go that they were fired up for this last 16 tie at the Lusail Stadium.

It was Ronaldo’s replacement, Goncalo Ramos, who gave Portugal the lead after 17 minutes.

The 21-year-old beat Sommer on his near post at a tight angle after Joao Felix made the pass to the youngster, who then struck the ball into the net with pace.

He looked determined to score more and came close shortly afterwards with his attempt being hit directly at the goalkeeper - an impressive start for the striker on his international debut.

Portugal’s second goal came on the half-hour mark when veteran Pepe headed the ball into the net following a Bruno Fernandes corner kick.

The 39-year-old, who is ten months older than tonight’s Mexican referee Cesar Ramos, found himself sandwiched between the Swiss defenders Fabian Schar and Manuel Akanji, but the pair could not jump high enough to stop Pepe from heading in the centre.

Pepe is now the second oldest player to score at a World Cup after Cameroon’s Roger Milla who was 42 at the 1994 tournament.

Switzerland looked fragile for the remainder of the half and could not keep up with the pace of Portugal’s attacking youngsters.

Shortly into the second period, Ramos scored again as he got Portugal’s third when a pass from Diogo Dalot into the box met the Benfica forward who then took a shot at close-range which went through the legs of Sommer.

Fernando Santos’ side were dominating with ease and secured their fourth goal just before the hour-mark.

This time it was Raphael Guerreiro who finished from a rather spectacular team build-up.

Felix played the ball onto Otavio at the half-way line before the ball fell to Ramos, who passed into Guerreiro who then rocketed the ball into the roof of the net.

The Swiss did produce a minor scare for the Portuguese minutes later when an unmarked Akanji tapped the ball in at the post from a corner kick.

Although it was a consolation goal, it still makes history as the first Swiss goal in a World Cup knockout game since 1954.

Portugal wanted more, however, and it was Ramos who notched their fifth goal of the night dinking the ball over Sommer from a Felix pass.

A hat-trick for the man who shockingly replaced Ronaldo and was just two years old when the latter made his international debut.

Ronaldo did appear with 15 minutes left on the clock and made an instant impact by scoring, but the goal was immediately ruled offside.

Substitute Rafael Leao was the man to slot in the sixth goal in the second minute of added time at the end of the half, when he cut inside and bended the ball with his right foot into the net from the edge of the box.

A fantastic goal on a tremendous night for Portugal who will meet Morocco on Saturday afternoon in their quarter-final clash after the African side defeated Spain 3-0 on penalties earlier in the day.