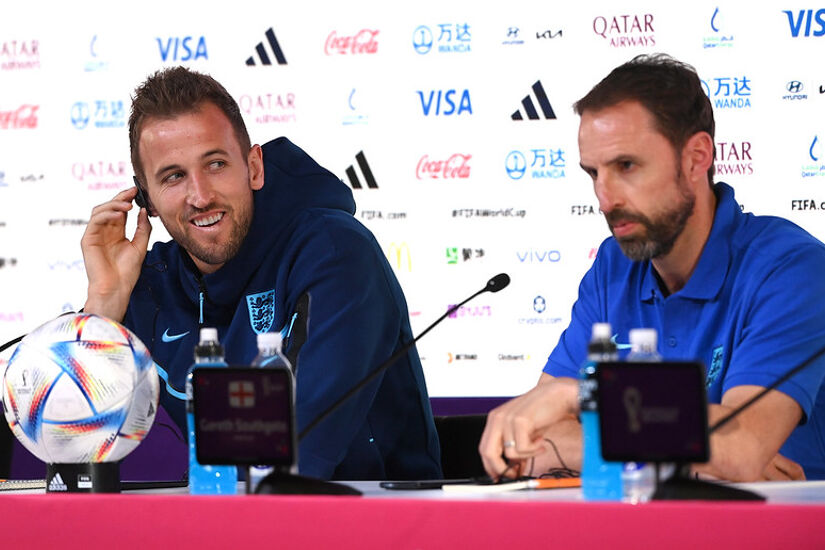 England skipper Harry Kane got on the scoresheet for the Three Lions in their 3-0 win over Senegal on Sunday night Credit: Stu Forster/FIFA/Getty Images

Jude Bellingham played a starring role in first half goals from Jordan Henderson and Harry Kane while Bukayo Saka’s third saw England swat Senegal aside and book a seismic quarter-final showdown with France next weekend.

If Argentina are to win the 2022 FIFA World Cup, then Lionel Messi will have to perform like he did vs Australia and then some. If England are to end 56 years of hurt, then 19-year-old Bellingham the crown jewel in Gareth Southgate’s set up will also need to dazzle and delight like he did tonight.

The Dortmund star, courted by many of Europe’s top clubs, gave a performance to match Messi just 24 hours previous. The youngster made a darting run through the Senegalese rear-guard and pulled an inch perfect ball back for Henderson who swept the ball under the body of Edouard Mendy in the 38th minute to edge ahead of Cristiano Ronaldo and level with Messi in World Cup knockout goals.

Kane has proven something of an assist specialist in Qatar, but he rifled a killer second into the net with the last kick of the half but again, the move was all about Bellingham who showed he has all the tools in his arsenal.

A dazzling run through the heart of the Senegal midfield akin to Messi last night, set England on a 3v2 situation and he had the pass to match, sliding in Phil Foden who squared to Kane via a deflection.

Kane broke his major tournament duck – scoring for the first time in six World Cup outings and since the 2018 edition. The captain got the goal but Bellingham got the praise.

It’s not the first time English hopes have been pinned on teenage kicks – Michael Owen and Wayne Rooney – but Bellingham produced a performance of maturity and quality way beyond his tender years.

Southgate’s reluctance or lack of trust in Phil Foden and Trent Alexander Arnold – arguably England’s two most creative players – has been lamented particularly after the drab scoreless scrap with USA but in Bellingham, a complete footballer has emerged to fill that void.

France have a front four of Antoine Griezmann, Olivier Giroud, Ousmane Dembele and Kylian Mbappe to marvel at.

England might have found an equally perfect balance in midfield with the defensive prowess and ball carrying ability of former Ireland international Declan Rice, Henderson setting the tempo with his running power, pressing and ability to keep the play ticking over and Bellingham as the master craftsman who can do it all.

England so often rubbished for their risk-free, conservative and at times ponderous football with Henderson a common scapegoat produced two goals of the highest quality which is why they are serious contenders to lift a first World Cup since 1966, capable of beating anybody even if they don’t set the pulse racing at times.

Football is a running game, and the Liverpool skipper was on hand to turn home for his third Three Lions goal playing his sixth major tournament.

Henderson’s best days are behind him with the 32-year-old having to manage his minutes at club level, but he has steadily worked his way into what will surely be his final World Cup if not major tournament for England.

The Premier League and Champions League winner made a difference as a second half substitute against the US and he was one of the better performers in another laborious showing vs Wales last week.

Henderson’s goal came very much against the run of play. Senegal, rank outsiders having scraped past Ecuador in the final group game arrived with a togetherness that has taken them this far without star man Sadio Mane and the reliable Cheikhou Kouyate.

Aliou Cisse’s side pressed and harried England putting a spotlight on Harry Maguire whose passing proved an asset for the AFCON champions.

In truth, England had Jordan Pickford – for an excellent stop from Boulaye Dia – and some wastefulness from Ismaila Sarr to thank for the game remaining scoreless.

Senegal played like a team who believed there was something there for them and the English back four, a weak link which had been so well protected in a substance over style approach by Southgate was frighteningly exposed at times.

A 2-0 deficit at the break was perhaps harsh on Cisse’s charges but it had knocked the stuffing out of the team and for the first time this extremely likeable side who have overcome setback after setback, emerged for the second half with their heads drooped and hearts sank as the realisation of their mountainous task dawned on them.

Arsenal starlet Saka who was impressive in England’s opening drubbing of Iran added his name to the scoresheet just shy of the hour mark, once again justifying another excellent selection call from Southgate.

Bellingham was excellent but in Manchester City’s Foden they have another young world class gem and with two assists in a 65-minute cameo he was given the nod to rest up for a tussle with the defending champions France next weekend.

Senegal’s fans have brought so much colour and carnival to this much maligned desert World Cup with their well-choreographed dances and makeup. But their boogie-woogie rhythm took the form of a meaningless two-step in the second half.

Marcus Rashford was the headline grabber against Wales, but he was dropped for Saka whom he duly replaced alongside Jack Grealish.

For the neutral, Bellingham was disappointingly withdrawn for Mason Mount while John Stones made way for Eric Dier with the Spurs centre back a likely candidate for a back three vs the French.

Kalvin Phillips has barely kicked a ball this season and he was introduced as a late sub for Henderson as Southgate gave a run out to some potential options should he wish to change the system in future.

Southgate rarely makes the wrong decisions, but he can be guilty of not thinking outside the box. The 4-3-3 formation has worked for England so far but their toughest test will undoubtedly come on Saturday in the face of an Mbappe inspired World Champions.

Will he revert back to a five-man defence to provide a greater shield for Maguire and Stones? Or will he be bold and stick with the system that will see England enter the quarter-finals as top scorers with 12 goals and just two conceded?

England were expected to get to the last eight and have done so with minimal hiccups as goals flow from all areas of the pitch and now Kane has opened his account.

France are like a Ferrari going forward, but the further back in the team they go they get closer to a Fiat Punto with issues at full back and a goalkeeping liability England possess the tools to wound the French if they can stop Mbappe.

In another world Rice and Grealish might be coming face to face with the current World Cup top scorer next March for Stephen Kenny’s Ireland but instead Rice will get to avenge a 2018 international defeat for the Boys in Green four months earlier.