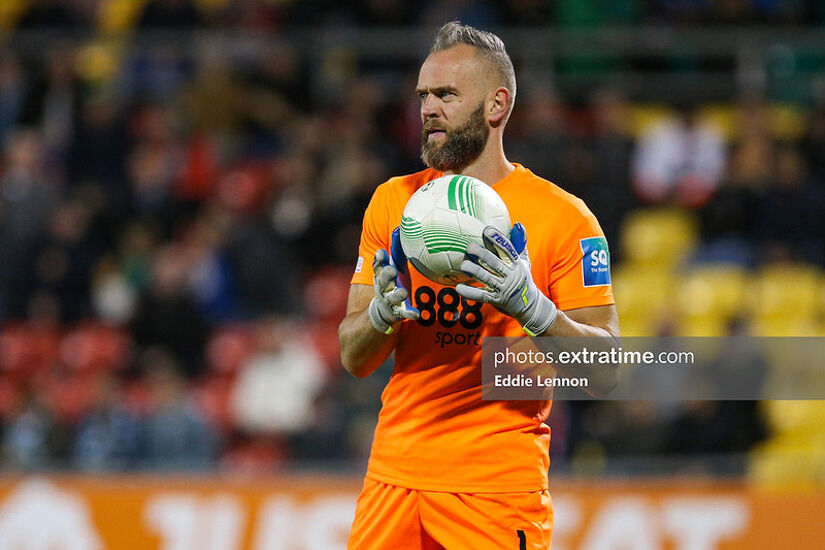 Alan Mannus returns in goal for Rovers for another season in 2023 Credit: Eddie Lennon (ETPhotos)

Record breaker Alan Mannus returns for another season with Rovers

Shamrock Rovers supporters were delighted to see their club sign winger Liam Burt from Bohemians on Friday, especially as it was coupled on the day when they finally got confirmation that Alan Mannus will return to play in goal for Rovers for another campaign.

They also confimred that Chris McCann and Viktor Serdenyik have left Tallaght.

The 40-year-old goalkeeper has been a crucial member of Rovers’ last five League of Ireland titles – winning two under Michael O’Neill and being part of the Hoops three-in-a-row side – having won five Irish League title with Linfield earlier in his career.

He has now made 57 appearances in European competition – 31 of them with Shamrock Rovers.

Mannus felt that the 2022 campaign would be his last one playing having struggled at the end of 2021 with a couple of niggly injuries on his knee and back. However, having had a good break over the winter and reducing his training load by one day a week, he felt good as the year progressed.

He was excellent throughout the campaign both domestically and in Europe. During the season he discussed with Hoops Head Coach Stephen Bradley the idea of staying on for another year and a deal was done prior to securing European group stage qualification but has only been confirmed this week.

This past season Mannus made 200th league appearance for the Hoops and along the way beat Rovers’ cleansheet league record of 97 previously held by Barry Murphy.

Mannus made it to the 99 clean sheet mark in the final home game of the season when Rovers beat Derry City 1-0 in what was his 202nd league appearance for the Hoops.

Mannus ended the 2022 season just one shut out short of Alan O’Neill’s all competition Rovers record of 120 clean sheets. O’Neill, in the 1993/94 season, was the last Rovers goalkeeper to win a title prior to Mannus.

Speaking to this author in October Mannus said: “Alan O'Neill is mentioned a lot at Rovers and I know he is a legend at the club so that is great I’m close to his record (in all competitions). I'd like to get some more clean sheets now, that is what we do as goalkeepers, keep clean sheets, and whenever I finish my career I'll look back on the record with pride.”

In his first spell at the club, Mannus earned 30 clean sheets from 69 matches (conceding 57 goals). On Mannus’ return to Rovers during the 2018 season he played the final 11 league games of that campaign season conceding just five goals and keeping seven clean sheets.

The following year he kept 21 clean sheets from 36 league games (conceding only 21 goals) and was instrumental in the Hoops winning their first FAI Cup in 32 years – keeping three clean sheets en-route to the final when he was the hero in the penalty shootout victory.

In 2020 Mannus conceded just seven goals keeping 13 clean sheets in an 18 game season that Rovers went undefeated. Last year he kept 13 clean sheets in 34 matches (conceding 13 goals) and in the most recent campaign he went two better in the same number of matches (letting in 22 goals).