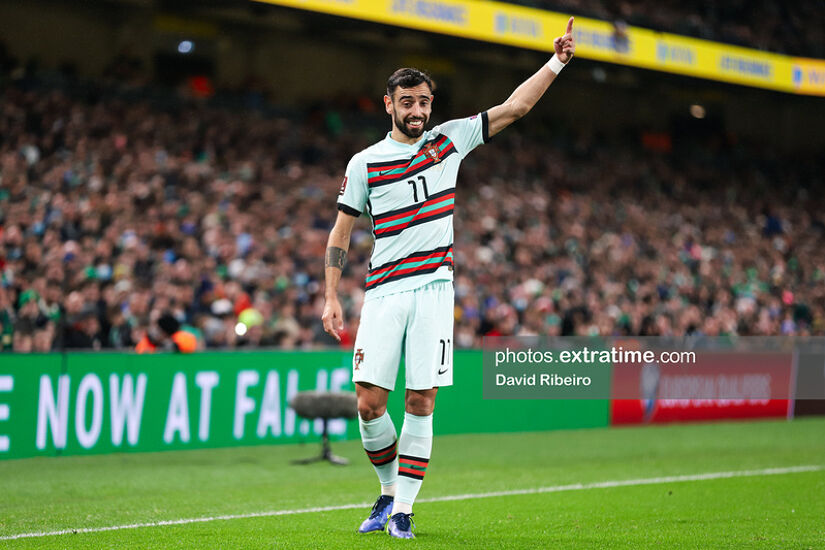 A Bruno Fernandes double secured Portugal’s progression into the last-16, as the Euro 2016 champions defeated Uruguay 2-0.

It was a game that was in the balance until his cross-come-shot found its way into the back of the net, before he then sealed the deal with a spot-kick late on.

Uruguay were left wondering what if. They were comfortable for a lot of the first half and limited Portugal to few chances.

They created opportunities on the break themselves but left it too late before unleashing the shackles, but Luis Suarez and Co are now sweating on their World Cup future.

Fernando Santos named three changes from the win against Ghana. Nuno Mendes, Pepe and William Carvalho came into the side. Otavio, Raphael Guerreiro and Danilo Pereira all missed out.

Chances were at a premium for much of the opening period of the first half. It was characterised by dis-jointed passing, a massed defence and niggly fouls.

A booking for Rodrigo Bentancur within the first five minutes told its own story.

Uruguay were content sitting back and frustrating their European opponents. Portugal did have shots from Joao Felix, Cristiano Ronaldo and Ruben Neves, but saw all of them blocked.

The best opportunity came to Bentancur at the other end. He embarked on a mazy run through the Portuguese midfield and out-paced the likes of Pepe and Ruben Dias to find himself one-on-one with Diogo Costa.

He only managed to hit the shot straight at him. He was at it again moments later as Uruguay broke with pace and numbers. His stabbed toe poke from a Mathias Olivera pull-back almost ran perfectly for Darwin Nunez. He was unable to control it and the chance went wide.

The best that Portugal could muster was a chance at the back post from Ronaldo. He did well initially to take a deep ball on his chest before attempting to prod it home from a tight angle. He was unable to do so, however.

Uruguay seemed happy enough to stick to their game plan into the second half and made their presence felt with some robust challenges on Neves and Joao Felix.

When the opening goal came, it was somewhat out of the blue.

Cavani conceded possession to Bruno Fernandes who found a rare amount of space. He clipped a wonderfully weighted cross towards his former Manchester United colleague Ronaldo.

It was debateable how much contact he actually made on it but it ended up in the net. Guillermo Varela the guilty party playing him onside.

Uruguay knew they had to respond and had some chance of their own. Cavani missed with an attempted volley and Nunez shot straight at Costa.

Portugal were now content to protect what they had and to soak up any pressure.

Diego Alonso knew he had to freshen things up and introduced a number of subs. They almost had the desired effect. Maximiliano Lopez unlucky to see a fierce drive come back off the woodwork. Luis Suarez then hit the side netting at the back post.

Giorgian de Arrascaete should have equalised when he ran onto a pass through the defence. His tame effort was neither a shot or a pass and went straight into Costa’s arms.

Portugal sealed the win with a penalty via a VAR decision in the final minute. Jose Gimenez was adjudged to have handled the ball just inside the area as he slipped.

Fernandes stepped up to place the ball past Sergio Rochet. He almost got a hat-trick but saw one effort blocked by the goal keeper and another come back off the woodwork.