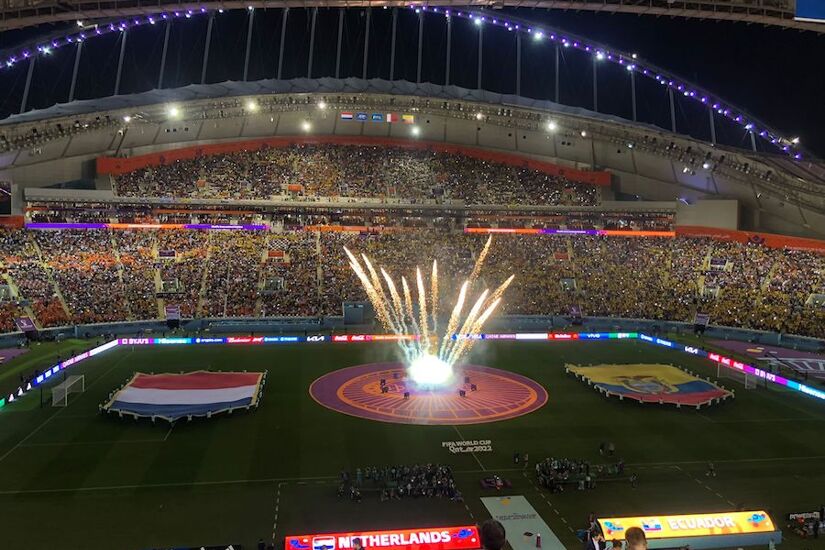 The Dutch will be happier with the 1-1 draw against Ecuador on Friday evening as they Louis van Gaal's men play Qatar in their final group game – with the hosts having lost 3-1 to Senegal earlier in the day eliminating them from the tournament with a group game to go.

Worryingly for the Netherlands was after finishing strongly in their opening game, and having been on top in the first half, they were second best after the break with very little attacking threat as the South American side left the Khalifa International Stadium disappointed with only a point.

The Dutch had scored late in their opening game with Cody Gakpo breaking the deadlock against Senegal six minutes from the end of normal time. He got the opener against Ecuador but this time after just six minutes of the match.

Moises Caicedo touch in the tackle took the ball to Davy Klaassen and he set up Gakpo on the edge of the area. The PSV striker’s left foot finish flew by Hernán Galindez for his second of the tournament.

Louis van Gaal had deployed his full backs – Daley Blind and Denzel Dumfries – higher up the pitch and the Dutch were patient with the possession with Frenkie De Jong working the ball left and right in the opening exchanges.

Ecuador had their best play down the left. In the 25th minute Gonzalo Plata and Pervis Estupinan linked up well with the latter getting a cross in requiring a flicked header from Virgil Van Dijk to clear to safety.

The Dutch skipper’ teammate Nathan Aké needed to clear in a similar precise manner three minutes later. Enner Valencia drifted wide left to create space for Ecuador. Michael Estrada’s flick took the ball across the six yard box before Aké put it behind for a corner.

The next attack saw Valencia cut in from the left and force Andries Noppert into a save pushing the ball around his right hand post.

In first half injury time, Ecuador had the ball in the net. Estupinan shot from a late corner went in however it was ruled out for offside as Jackson Porozo was blocking Noppert’s view.

Van Gaal, who had made three changes to his starting line up, had spoken more about managing minutes in relation to Memphis Depay. His introduction of the Barcelona man a half an hour from time in their opening game proved very fruitful. This time around he made his appearance on the pitch from the beginning of the second half replacing Steven Bergwijn who was fairly ineffectual in the first half, unlike the industrious Gakpo who delivered the Dutch goal.

However it was the South American side who started the second half in a brighter manner and kept that pace going cheered on by their sizeable yellow clad traveling support. Four minutes in Ecuador’s press won them the ball through Michael Caicedo in the final third and working the ball to Estupinan his shot was saved by Noppert.

However with the Dutch defence static and with hands high in the air looking for an offside that never came La Tri’s skipper Valencia was on hand to finish inside the six yard box. It was his third of the campaign (having scored all six goals in Ecuador’s last five World Cup matches).

It looked like they would take the lead just before the hour mark when Gonzalo Plata let fly with his let but having beaten Noppert the ball pinged back and out off the underside of the crossbar.

Valencia left the pitch on a stretcher late on and all of Ecuador will be sweating on the fitness of their goalscoring skipper.

The draw means Van Gaal has yet to suffer a defeat in his latest spell as manager – they are unbeaten in 17 matches (and the Netherlands are now undefeated in their last 15 group-stage games at the World Cup). The manager will be hoping that Memphis grows more into the tournament as they could do with his attacking threat – they had just the two attempts on target compared with 14 from El Tri but with Qatar to come progression to the knock out phases looks almost guaranteed.