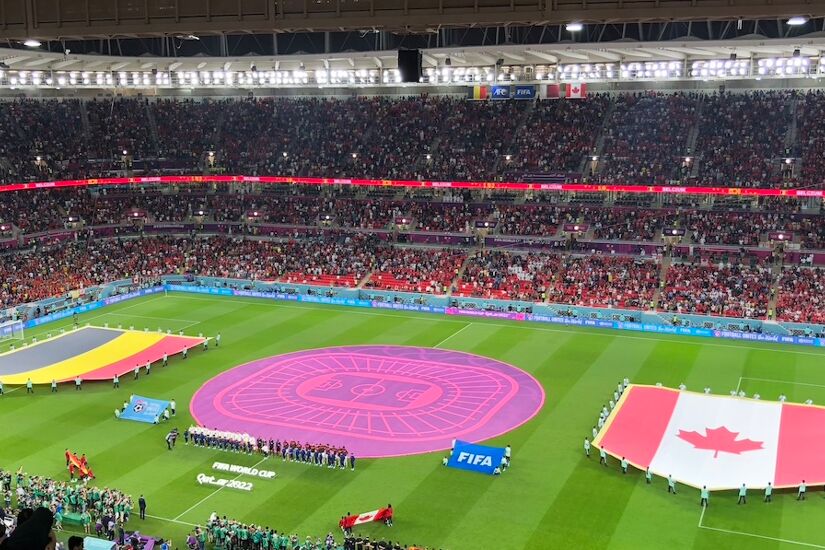 Belgium and Canada line up ahead of kick off Credit: Macdara Ferris (ETPhotos)

It was a disjointed performance by Belgium who belied their ranking of second best side in the world. They were the second best team for much of the game and yet went away with a 1-0 victory thanks to a late first half goal from Michy Batshuayi against a courageous Canada team.

The Canadians were returning to the biggest stage in world football for the first time since their debut at the World Cup in 1986 when they lost all three group games. While the continued their run of defeats with this match in Doha, they can carry the momentum of a fine performance into their remaining two group games.

The questions surrounding this aging Belgium team, particularly in defence, will continue after this display even if they did keep a clean sheet. However, when they have the quality of the creative threat, they are still a team that can go deep in this competition – particularly with favourites such as Argentina and Germany starting their tournament with defeats.

It was slightly disconcerting to hear what sounded like the Celtic Symphony being sung around the Ahamad Bin Ali Stadium on Wednesday night but it was the chant of ‘Ooh aah Canada’ rather than anything being anything sung about graffiti on the wall.

It looked like the writing was on the wall for Belgium though inside the first ten minutes when their opponents were handed a penalty after a long VAR check that saw referee Janny Sikazwe head to the sideline TV to check the incident before awarding a spot kick.

Alphonso Davies sent the ball to the left of Thibaut Courtois but Real Madrid goalkeeper pushed the ball away with enough pace that the Bayern Munich player couldn’t get on the rebound.

Davies didn’t let his head drop though and was a constant threat to Belgium. The Red Devils attacking threat with Kevin De Bruyne and Eden Hazard kept the Canadian defence on their toes.

De Bruyne on a couple of occasions chose the wrong option especially with the first chance when he drove through the centre but couldn’t play Yannick Carrasco in on the goal.

Mid-way through the half a delightful Eden Hazard touch and turn saw him feed Batshuayi. A return pass might have been a better option as his shot was blocked as had been the case in just the second minute of the game which required Milan Borjan to save.

The game began to open up and Canada got on top. While there was polite cheering in the standards from the Maple Leaf clad supporters – ‘Let’s go Canada’ - their team were snappier on the pitch and took the game with aggression to Belgium.

Alistair Johnston’s shot required Courtois to save and Jonathan David had a host of chances. The crowd were chanting ‘VAR, VAR’ when Alex Witsel put his hand on Richie Laryea as he went down in the box but there was to be no penalty on this occasion.

Then with a minute to the break, and Canada in control it seemed, they didn’t deal with a ball hit up the middle by the veteran Toby Alderweireld. Batshuayi controlled it on the run and his fine left foot finish gave Roberto Martinez’s side a half time lead that they scarcely deserved having only managed four attempts on goal to their opponents 14.

Despite having that lead Martinez made two changes at the break with Youri Tielemans and Carrasco being withdrawn in place of Thomas Meunier and Amadou Onana.

Canada kept their pressure up in the second period but if they had a striker with more ruthlessness than Jonathan David they might have got that equaliser but the Lille striker couldn’t find the back of the net.

The Canadian defence put their bodies on the line and Belgian didn’t do much from their Anthony Barry designed set pieces that did come their way.

As Morocco and Croatia played out a scoreless draw in the other group game earlier in the day, a win for Belgium in their next game against the African side will see them through. Canada will hope for more reward from their endeavours when the face the runners up from the last World Cup on Sunday.