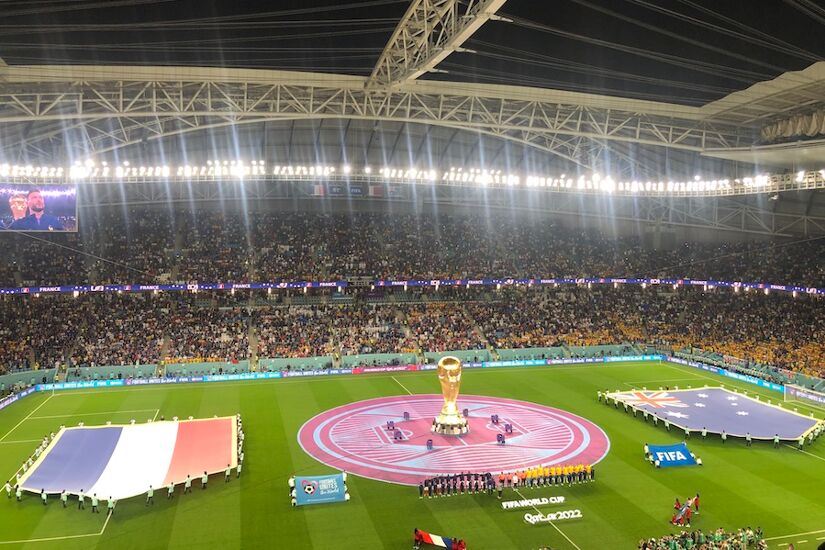 The French and Aussie teams line up ahead of kick-off in the Al Janoub Stadium Credit: Macdara Ferris (ETPhotos)

Olivier Giroud delivered on the double for France with his brace drawing him level with Thierry Henry in the all-time French goalscoring charts as France laid down an early marker as they seek to become the first side in six decades to retain the World Cup.

With goals additional goals from the impressive Adrien Rabiot and the outstanding Kylian Mbappe, it meant the reigning champions started their title defence with a resounding 4-1 win over Australia.

Tuesday had started with one of biggest shocks in World Cup history when Saudi Arabia stunned Argentina and the footballing world with a win over one of the tournament favourites.

The fourth and final game of the day started with underdogs Australia taking the lead inside the first ten minutes against another of the competition favourites but there was to be no repeat shock in a game that drifted into Wednesday morning in Qatar as the trend of sizeable amounts of injury time continued.

The Socceroos scored the opening goal of the game in the ninth minute from a move that started with Harry Souter's sweeping 50 yard pass to Matthew Leckie. The attacker took it on and cut inside Lucas Hernadez who crumpled in a heap (and was replaced soon after by his brother Theo). Leckie looked up and picked out Craig Goodwin coming in at the back post who steered the ball by Hugo Lloris.

They almost doubled their lead mid-way through the half when Mitchell Duke drove a right foot effort off a loose French pass just over the crossbar.

The Aussies really should have looked to hold onto the ball rather than hack it clear under pressure and with the pace left and right from Kylian Mbappe and Ousmane Dembele it invited trouble.

However, it was Juventus’ Adrien Rabiot who proved critical to the French comeback. He powered a header home in the 26th minute off Theo Hernandez's centre from the left. There was a VAR check but all was good and within six minutes the Frenchhad the lead with a landmark goal for Olivier Giroud.

The talk ahead of the start of tournament was how the French would cope without the injured Paul Pogba and N’Golo Kanté and the late withdrawals of Chris Nkunku and of course Ballon D’Or winner Karim Benzema.

Benzema was a huge loss but Didier Deschamps’ side did win the World Cup last time out without the Real Madrid striker.

The Mpappe and Olivier Giroud combination has proved fruitful and so it was again just after the half an hour with Rabiot helping out. Mbappe’s flick freed up the midfielder to step into the box and his unselfish pass allowed Giroud to make the half century mark of goals for France.

Dembele, Griezmann and Mbappe – with a glaring miss – really should have added to the French advantage but couldn’t and they were almost punished when Jackson Irvine headed against the post in first half injury time.

Olivier Giroud almost got his 51st goal with a bicycle kick that sent gasps around the stadium as it just bouncedoff Matthew Ryan's post after another great run by Theo Hernandez.

The Socceroos were somehow staying in the game but had no attacking penetration. Their efforts were all on defence and ultimately that proved their demise.

Griezeman went close to scoring off a sweeping French move only for his side to extend their lead with their next attack. Dembele whipped the ball in and Mbappe rose to power home France’s third goal.

Mbappe was the provider for the fourth as he picked out Giroud who headed home an historic goal to draw level with Henry.

Three goals to the good it allowed Deschamps bring off Dembele and Aurélien Tchouaméni as they saw out the game with ease. Their only concern will be the fitness of Lucas Hernandez.

Parochial concerns for Ireland is just how good this French team look – Mbappe’s pace is astounding - although there will be plenty of chapters written before the Boys in Green take on Les Blues in the Euro 24 qualifying after this tournament concludes.