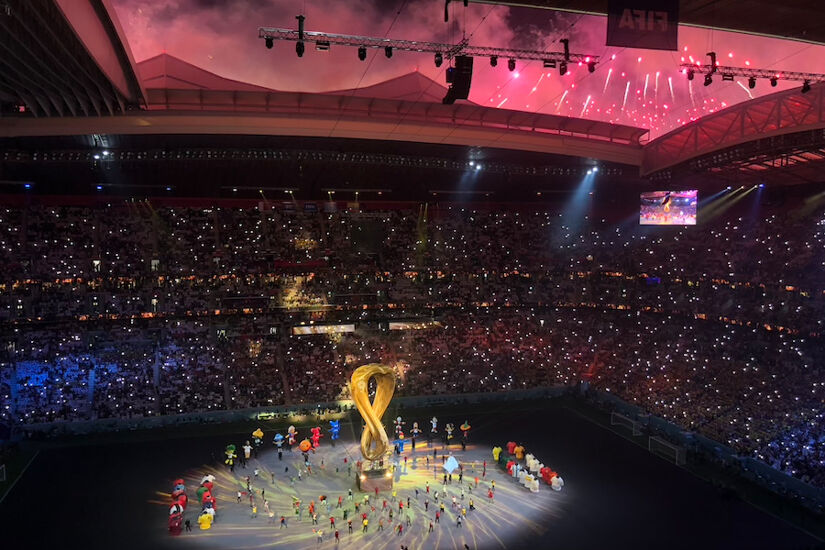 Macdara Ferris reports from the Al Bayt Stadium in Qatar

This bizarre World Cup kicked off with a bizarre event.

We had the opening ceremony in a 67,000 seater stadium – shaped like a Bedouin tent - plonked in the desert 40km north of Doha followed by a match where the host nation became the first to lose a World Cup opener.

2-0 down at half-time many of the locals chose to stay in the corporate areas where the beer was available to them (unlike in the seats for the ordinary punters where it was banned after a decision only last week).

Many others headed for the exits during the second half for the long trek back to Doha by car or the bus and tram combo.

It is a 30 minute bus ride on the six lane highway to the last stop of the red line Metro at the Lusail Stadium which will hold the final in 28 day’s time.

When your extratime.com reporter arrived at the ground off the metro/bus combo three hours ahead the 7pm kick off time in Qatar, I grabbed the offered golf cart to take me up to the media entrance. It spun by the VVIP entrance which had a host of camels lining the route up to the stadium.

Seven days apart - from the FAI Cup Final 🐎 to the opening game of the World Cup 🐪 pic.twitter.com/qzTTMQsAqX

Having flown in by helicopter this was the entrance to the ground that His Highness The Amir, Sheikh Tamim bin Hamad Al-Thani, would have come through along with FIFA President Gianni Infantino and the Crown Prince of Saudi Arabia Muhammed Bin Salman.

Relationships have obviously improved in the region since the blockade of Qatar that the Saudi’s were part of. The trio settled in beside one another to watch the opening ceremony ahead of kick-off of the game.

Down below these VVIPs Morgan Freeman strode the pitch narrating ‘The Calling’. I wonder did the Oscar winner get to chat to MBS about some of his films like 'The Shawshank Redemption' or maybe even ‘Se7en’ afterwards? The star of Driving Miss Daisy provided the narration for the event explaining how football allows us to come together as one big tribe.

The main musical act was Jung Kook, a member of Korean group BTS, who sung his song ‘Dreamers’ with help from Qatari singer Fahad Al-Kubaisi.

90 mins to kick off of the 2022 World Cup. Before then we will have the opening ceremony, everyone tuning in to watch BTS’ Jung Kook perform Dreamers yeah? I’ll be dropping updates in @ExtratimeNews https://t.co/lpV8CNT8Bx pic.twitter.com/6TvInD9osV

I had to be a bit googling about K-pop but BTS are big - the Grammy-nominated South Korean pop group have fans across the globe but my highlight of the ceremony was seeing the mascots from previous World Cups dancing on the pitch to the music of Shakira.

There was Willie from 1966, Juantino from Mexico 1970, Footix from France 98 and my favourite Ciao from Italia 90. Then La’eeb loomed out above them all. The mascot for this tournament’s name means super-skilled player in Arabic and he looks a bit like Casper the friendly ghost.

The opening ceremony ended with a massive firework display which I could just about see out of the gap above us as the stadium roof remained open for the ceremony which concluded about 45 minutes before the match allowing the teams to get out and warm up for the biggest game of their lives.

Infantino took to the mic noting that “Football unites the world. Let the show begin”. Well it was Qatar who made a show of themselves with a nervous performance – surprising from a team who are the Asian champions. However it seemed that pressure got to the home side.

They failed to trouble Ecuador until first half injury time and by then they were two goals down and there was no coming back. Senegal and the Netherlands must be licking their lips at the thought of taking on the host nation after that display, Indeed, Ecuador may regret not putting a few more goals up on the scoreboard.

The increasing number of empty seats as the second half went on was embarrassing and those Qataris who stayed on till the end won’t have liked to hear the ‘Olé Olé’ chants that accompanied La Tricolor passing the ball around with ease as the team in maroon could only watch on.

“We have a lot of room for improvement,” said Qatar manager Feliz Sanches afterwards. “No excuses, we started badly... nerves and responsibility have played a trick on us.”

There has quite rightly been massive criticism about staging the tournament in Qatar. Calls for just concentrating on the football rather than the massive issues around the labour system in the country and LGBTQ+ matteers have arisen in other quarters but there wasn’t much Qatari football on offer in this game to concentrate on.

With the opening game having been moved forward 24 hours after the draw was made, the host nation at least don't play again for five days – so maybe time to set things right ahead of their match against Senegal in the Al Thumama Stadium next Friday.

Their opponents in that game play the Nederlands on Monday with England v Iran the early game and USA and Wales kicking off at 10pm local time. With three games across the day, the World Cup is about to move up a gear.