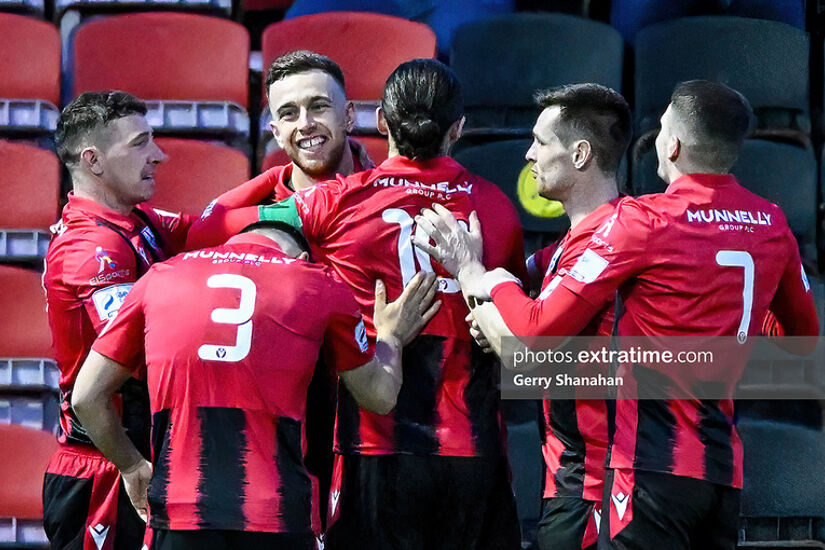 Linking up with former manager Gary Cronin after a prior stint at Bray Wanderers, Dylan Barnett quickly established himself as one of Longford’s star performers in 2022.

The left-sided defender excelled in a variety of positions for Town – with the former Brighton & Hove Albion youth becoming an ever-present for the club.

Ladies and Gentlemen, boys and girls...

May we present to you one of the goals of the season.

The most notable of which proved to be his wicked long-range strike that flew into the top corner against Cork City towards the latter end of the season.

He often assumed captaincy duties for Longford under his former boss at Bray – and he was duly rewarded for his performances with a place in the PFAI First Division team of the year.

Also a new recruit, Joe Power ventured into his first campaign as a League of Ireland player with a point to prove.

The teenager is the younger brother of Shamrock Rovers winger Simon, and had only played in the Leinster Senior League with Greystones United before his move to Longford.

However, he was close to joining a host of English clubs earlier on in his career, but Covid-19 and a change in transfer regulations put pay to that dream.

Joe Power made his debut for De Town last Monday at the Carlisle and made an immediate impact setting up Darren Craven for the 94th-minute winner. #Town2022 | #LTFC | pic.twitter.com/OoCbQ6plLR

But rather than let that setback grind his professional dream to a halt, Power leaned on that setback to make up for lost time.

The Greystones native was often a standout performer for Town throughout the season – and also caught the eye in some big games for the club. He will be one to watch heading into 2023.

Joining from second-tier rivals Galway United, Jordan Adeyemo made his mark for Longford Town after manager Cronin put his faith in the forward.

The 22-year-old took his time to adapt to life in the Midlands at the start, but once he found his groove he was difficult to stop.

The prolific forward netted 8 times in 13 games for Longford, with his most recent goals coming against his former club in the playoffs.

Against his old club!

2nd half now underway at Bishopsgate

And while he was unable to help Longford reach a First Division promotion play-off final, Adeyemo will be pleased with his half-season effort at Bishopsgate.

The extratime.com team predicted that Longford Town would sneak into the First Division playoffs by virtue of a 5th place league finish (see here).

In fact, Longford Town defied our pre-season prediction on where we predicted they would finish for the 2022 season.

Town comfortably sealed their place in the First Division play-off series as early as September ­– and claimed some big results along the way.

And while they were unable to defeat league winners Cork City, they ran them close on a number of occasions – drawing with them three times.

Relive the moment from a different angle as Sam Verdon scores in the 95th minute to grab all 3 points at the RSC last night. #Town2022 | #LTFC | pic.twitter.com/FBtQuzZKNy

Further wins also arrived against Galway United – but it was against the Tribesmen where their season ground to a halt.

After recording a thrilling 2-2 first-leg draw with United, Town were defeated 3-0 in the second-leg at Eamonn Deacy Park.

That loss over two legs saw their season end prematurely. But they can at least be pleased with their effort throughout the season after a sobering 2021 experience in the Premier Division.

Longford Town bowed out of the FAI Cup in the first-round proper of the tournament.

Drawn against Premier Division side Dundalk, Town were easily swept aside by the Lilywhites at Oriel Park ­– losing 4-0.

For Longford Town – it is imperative that they continue to build after a solid, yet unspectacular 2022 season at Bishopsgate.

The Red and Black met their pre-season target of reaching the play-offs, although they will be left pondering what might have been after that exit against Galway United.

Ryan Graydon's mid-season departure to Derry City left a void, but they were able to fill the void somewhat with the signing of Adeyemo. But they will have to push forward next season without Cronin, who has moved on to become Declan Devine’s assistant at Bohemians for next season.

And if they manage to replace their former boss with the right man, they will be hopeful that they can sustain a promotion chase once more.