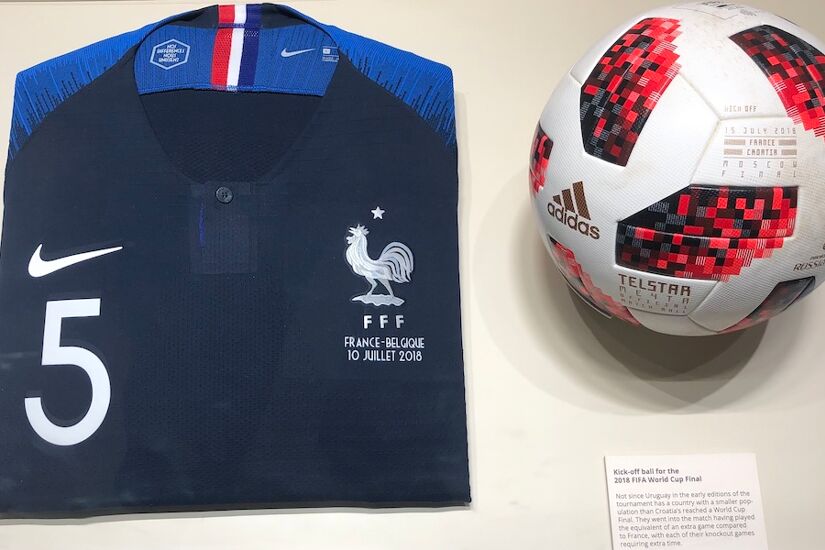 Samuel Umtiti's jersey from the last World Cup and the kick-off ball from the final his team won in Russia Credit: Macdara Ferris (ETPhotos)

On Saturday night, on the eve of the kick-off of the World Cup, the people of Doha – and the small pockets of traveling fans – descended on the FIFA Fan Festival in Al Bida Park.

Located along the Corniche waterfront, the launch night had fireworks, the World Cup trophy and live music. DJs got the crowd going as did Colombian star Maluma who performed live on the stage.

There was also an appearance on stage by Hassan Al Thawadi, Secretary General of the Supreme Committee for Delivery & Legacy. You might remember him from such Netflix documentaries as ‘FIFA Uncovered’.

It was in Germany in 2006 that FIFA instigated the official Fan Fest. Berlin had the fan mile, the Frankfurt set up was big screens floating in the River Maine and in Gelsenkirchen Schalke’s old Glückauf-Kampfbahn stadium was used.

Overall 3.5 million bratwursts were eaten and 3.5 million litres of beer drunk across the venues. The beer is still flowing this time around but it will set you back €14 for 500ml of Budweiser (with no beer available in the stadium venues following Friday’s u-turn).

Fireworks above the FIFA Fan Festival and some attendees are getting the €14 beers into them. Bonus appearance from Hassan Al Thawadi, Secretary General of the Supreme Committee for Delivery & Legacy. He was on just before Colombian singer Maluma. pic.twitter.com/vXgAD7RxVA

While there were multiple fan zones in previous World Cups, this time around, with the World Cup taken place in a location the size of Wexford, it is a little bit different. There is just the one fan zone but it is massive and the highlight for me on my visit was the FIFA Museum.

It has some eye catching memorabilia from the previous 21 tournaments.

A newspaper clipping from El Dia newspaper shows pictures from the opening ceremony of the 1930 World Cup in Uruguay. That event took place five days after the first game – by which time five teams had already been eliminated!

From previous finals of the World Cup, there were the match programmes from 1938 and 1954, a Union Jack corner flag from Wembley in 1966 and Sergio Goycochea’s jersey from the 1990 final.

FIFA museum at the Fan Festival: The two team sheets from 1998 #FIFAWorldCup final, gloves that couldn’t stop Robbie Keane’s late equaliser for 🇮🇪 against 🇩🇪 in 2002 + Ronaldo’s jersey from that tournament, Maracana turf 🇧🇷 and match ball from the 2018 final + Umtiti 👕 pic.twitter.com/qg6vwXlMva

From tournaments past, there was the whistle used by referee Abraham Klein in 1978, the gorgeous yellow jersey worn by Zico in 1982, Andreas Brehme’s iconic Germany jersey from 1990 and the yellow card shown to Paul Gascoigne from the same tournament.

Now it is time for this tournament to kick-off and for the players to create the mementoes for such future exhibitions. What World Cup Final exhibits might they be?

Maybe Leo Messi’s match worn goalscoring jersey, the gloves of Alisson from a winning penalty shoot-out or maybe the ‘One Love’ armband of England skipper Harry Kane after he lifts the 18 carat gold winners trophy?

Got chance to hear Arséne Wenger & Jürgen Klinsmann talk football trends today. With players coming straight from clubs Klinsmann said: 'Teams might be at an advantage with a big block of players from the one club' e.g. Germany with Bayern Munich block https://t.co/uLik23BDXN pic.twitter.com/Un0lNEpEUM